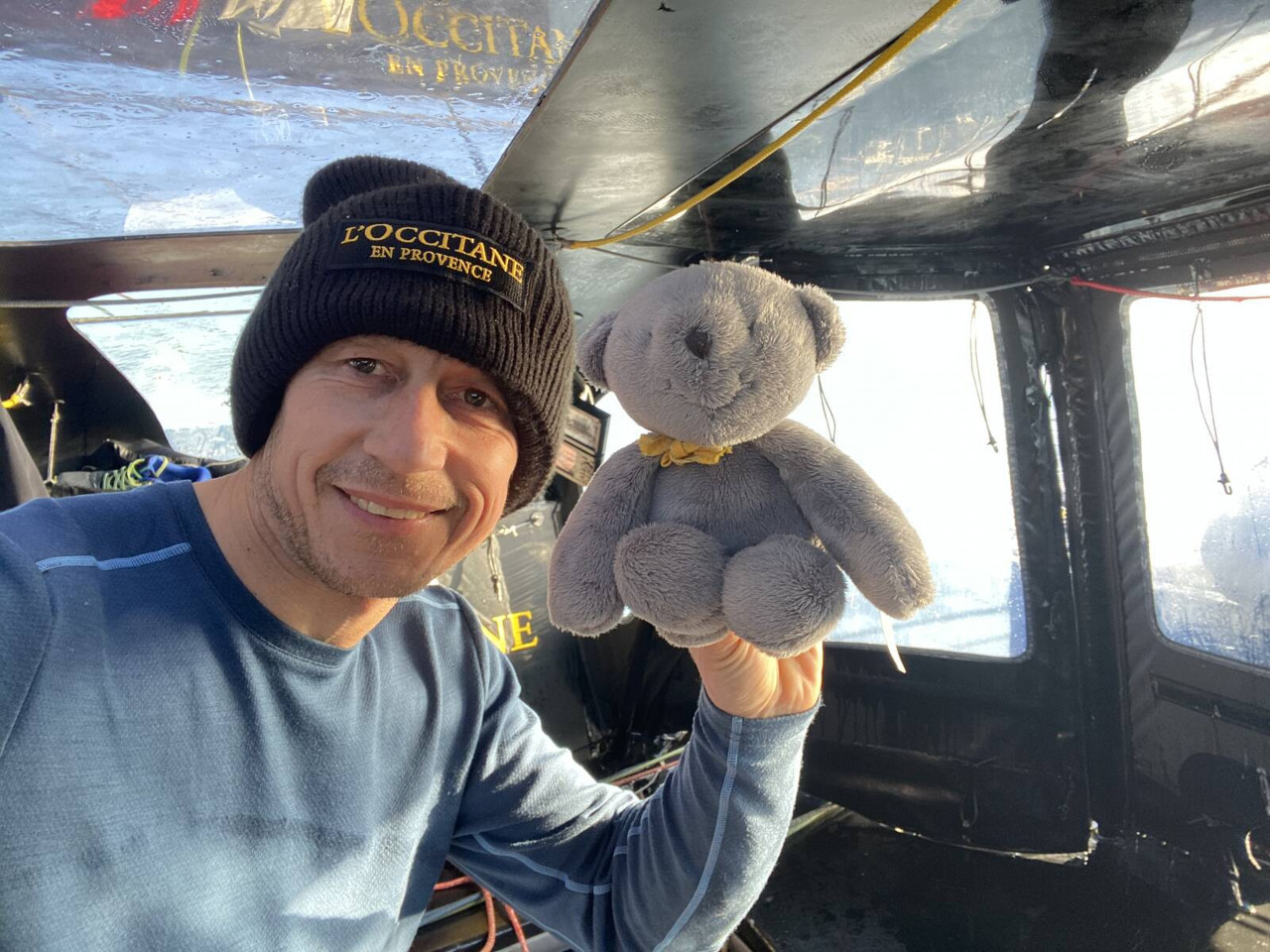 If you were lucky enough to speak to Armel Tripon during this Vendée Globe, you would come across a man who is enjoying every minute of his first solo round the world race and an individual bubbling with positive energy and enthusiasm.

We contacted Armel with some questions in written form which he replied to in written English, as his Sam Manuard-designed L’Occitane en Provence surfed ever eastwards, 500 nautical miles due south of New Zealand’s south island.

Tripon started this race with a setback when a halyard lock problem forced him to climb his mast twice to make repairs. The delays dropped him out of the leading bunch, but since then the 45-year-old sailor from La Trinité sur Mer has been playing catch-up in spectacular style.

Having been as far back as 24th place and more than 2,000 miles behind the leaders when he entered the Southern Ocean, he is now in 14th position, 1,340 miles off the leading pace and fast catching Romain Attansio, in 13th place, just 160 miles ahead of him.

We asked for Tripon’s view on Sam Manuard and on his yacht, the first IMOCA design from Manuard’s board that has attracted a great deal of interest with its beautiful/ugly looks, its scow bow and its lightning pace.

Her skipper has fallen in love with her.

“My message for Sam?”Tripon told the IMOCA class website. “Well, he is a maverick guy and an incredible man and someone who can draw this kind of boat,” he said. “I think this boat is not far from the perfect boat,”he added. “I think we can change some details, we can be more accurate, but from my point of view this boat is really perfect.”

This is some accolade from a skipper in a race in which this is not always the case and when sometimes love-hate relationships develop between sailors and their boats. Tripon also believes the black rocket-ship can perform even better. “With the IMOCA rules next year, we can add some more mast rake and it will be faster,”he said.

This is Tripon’s first Vendée Globe but he already knows it will not be his last. On this lap he wants to try to catch as many boats as he can but, he says, he will not be finished with this race when he gets back to Les Sables d’Olonne.

“Sure I would like to do this race again and come back to fight with the leaders,”he said. “I like this race, this kind of race, but it will be another kind of race if I lead the fleet. And (I will come back) with better knowledge, because I lack knowledge and miles on this boat, so with probably another year of sailing I will be more confident to push hard.”

We asked Tripon about life on board after 46 days at sea and he told us his boat is “shaped for a sailor,”(again not something you always hear about modern IMOCAs which offer their skippers an uncompromisingly rough experience in almost all conditions).

Tripon uses music to relax; He likes rock music when the boat is going fast or classical and jazz for the quieter moments in light airs. “Music is really important because it stops the noise of the boat and this kind of boat is really noisy,” he said. “I listen to music with my headphones.”

Then he talked about the sheer enjoyment of his incredible adventure – sailing alone around the world on one of the fastest monohulls ever built. “I really like to live this race,”he said, “to live and to appreciate this kind of trip…and really, at the beginning you don’t know how or where you will go…the Vendée Globe is just a dream and it becomes a reality day after day, night after night; wow! – it’s amazing.”

Is Armel missing his family? He says not and that’s because he prepared mentally for the separation. Occasional moments aside, the method is working. “Sometimes, sure,”he said. “But I was prepared and I knew it was three months without seeing them. It’s OK, I am not sad because of that.”

Our final question to Armel was about his sponsor, L’Occitane en Provence, a big Swiss company with outlets in troubled high streets all over the world. The French skipper wished all the company’s staff a Merry Christmas.

“I am really proud and happy to compete in this race around the world and all the time L’Occitane is promoted,”he said.

“The brand is huge all over the world and to be represented by a little boat sailing around the world – that is nice,” he added.