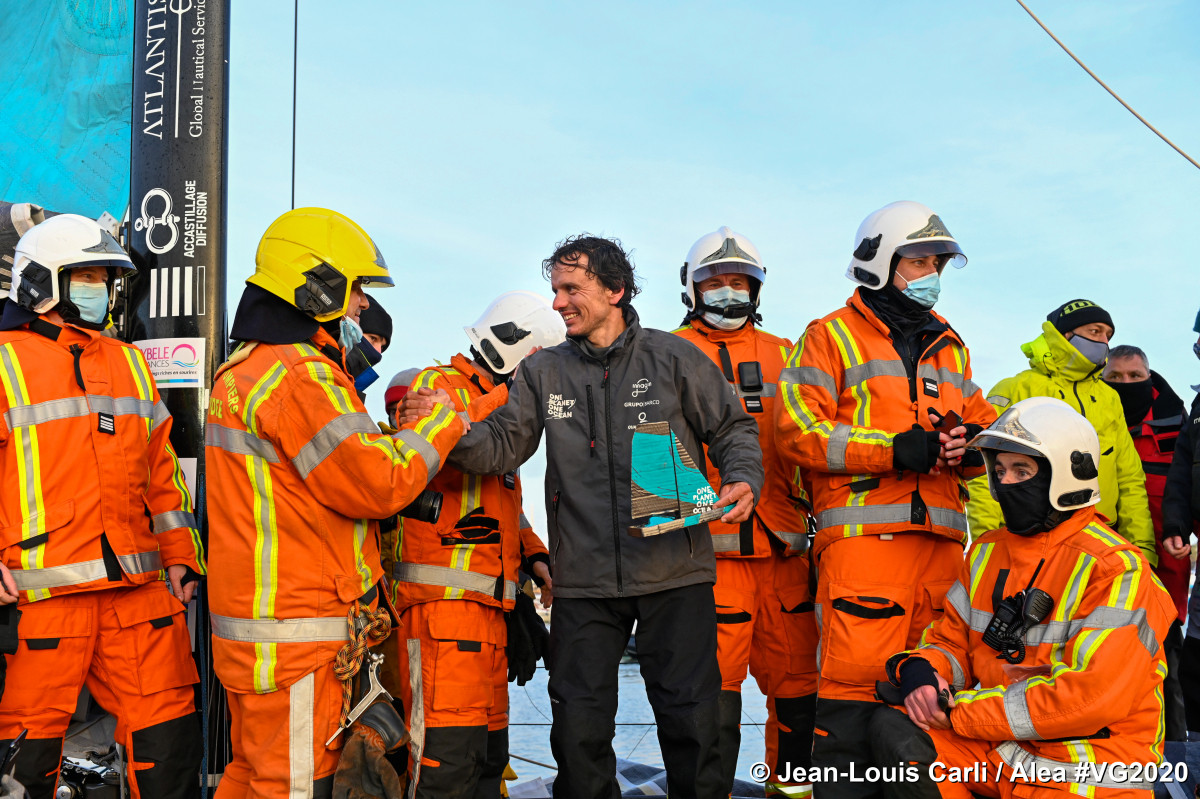 When he set off with the record sized field of 33 solo skippers on Sunday 8th November, the quiet, humble skipper from Barcelona was hoping to beat his 108d 19hrs time on the 2016-17 race and to get closer to the 94 days 4 hours record for his boat set when it was new, finishing second in 2001 in the hands of Ellen MacArthur.

Costa, who celebrated his 40th birthday during the race, works full time as a fire fighter in his native city, is the first amateur skipper to finish this edition race. He had to take time out from his two weeks of pre-start obligations in Les Sables d’Olonne to return to Spain to fulfil his work rota and will be back working by the end of next week.

After the 2014 two handed Barcelona World Race which he sailed with Aleix Gelabert, this is his third consecutive round the world race with this most famous IMOCA which today finishes her sixth round the world race from six starts, five days before celebrating her 21st birthday.

Compared with his 2016-17 challenge, this has been a far more satisfying race for the former Mini 650 sailor. He was forced to return back to Les Sables d’Olonne only 45 minutes into his race last time because a ballast hose had pulled off and it flooded his engine bay shorting out his electrics and damaging his generator. After a battle against the clock to repair, during which he was helped immeasurably by his Les Sables d’Olonne fire service counterparts, Costa restarted four days later with his nearest competitor 700 miles ahead of him.

And honouring his performance and his successful return to Les Sables d’Olonne again, Costa was afforded the warmest welcome back by his Les Sables d’Olonne fire service friends. After that his race was still plagued by sail, electrics and rigging problems. In contrast during this race he has been in close contact with rivals, a lot of the time enjoying boat for boat racing with his former Mini class rival and friend Pip Hare on board Medallia, an IMOCA of similar age and speed potential.

Having bought the IMOCA from the FNOB in May 2019 along with his business partner Pep Costa (no relation) the skipper and a small group of friends refitted the boat but due to funds and timing Didac was unable to compete in any intervening races.

“I only had two or three afternoons off in the last two years, the rest of the time I was working or working on the boat.” Said Costa before the start.

Hence he knows every millimetre of his boat perfectly. Among the key changes to improve performance, in consultation with Owen Clarke who were part of the original Kingfisher design group, Costa removed the 250kgs daggerboards as part of an operation which saved nearly 1 tonne in weight. They fitted new Quantum Sails, changed the ballast configuration, fitted a new engine and new electronics. Even after a successful initiative crowd funding and selling Didac T shirts and merchandising he and the team still lacked funding when he started.

Doubly determined to succeed and with his cares and worries left on the dock Costa is immediately back in his element taking every opportunity, showing patience and determination. At the Canaries, he fought with Arnaud Boissières, Pip Hare and Manu Cousin group. The "four" pass the equator, some 5 days after the first, but in very close contact with each other, already having a great race within the race.

Costa is a happy skipper: “I'm happy to have crossed the equator and to be in the southern hemisphere in the thick of a fight. Outside there is not much different to usual but my inner excitement is growing little by little, but the anticipation of getting back to the southern oceans wells up in me even more and more, I am so looking forwards to it.”

Eleventh in the 2011 Mini Transat, fourth in that Barcelona World Race in 2015 with Aleix Gelabert 14th in the Vendée Globe 2016 there is nothing Didac Costa loves more than ocean racing. For the record hours after finishing the Barcelona World Race he jumped on board with Jean Le Cam to deliver Cheminées Poujoulat. Costa is so eager to learn from a master, some of that knowledge transference he demonstrates in this ninth Vendée Globe, pushing hard to be able to compete close to more recent IMOCAs.

“I am very careful to work hard at my settings and trimming and I see each time I gain half a knot of speed it is so satisfying!", He wrote when passing Cape Leeuwin, not far from Stéphane Le Diraison.

He, like others, has wind vane problems from about the middle of the Indian Ocean and can no longer fully trust his autopilot. But once more he seems to be almost at home in the big depression of the south:

"The sea was impressive: mountainous and building with waves were coming from all directions. The wind was whipping the spindrift off the top of the waves but my One Planet One Ocean was doing what knows how to, where it is at home ”.

Twentieth at Cape Horn in weather and sea conditions more favourable for the Costa stays in touch with the group all the way up the Atlantic, after only just missing catching the same system as his rivals, the redoubtable Catalan finishes just 1d 18hrs 49m 33s hours after Pip Hare.