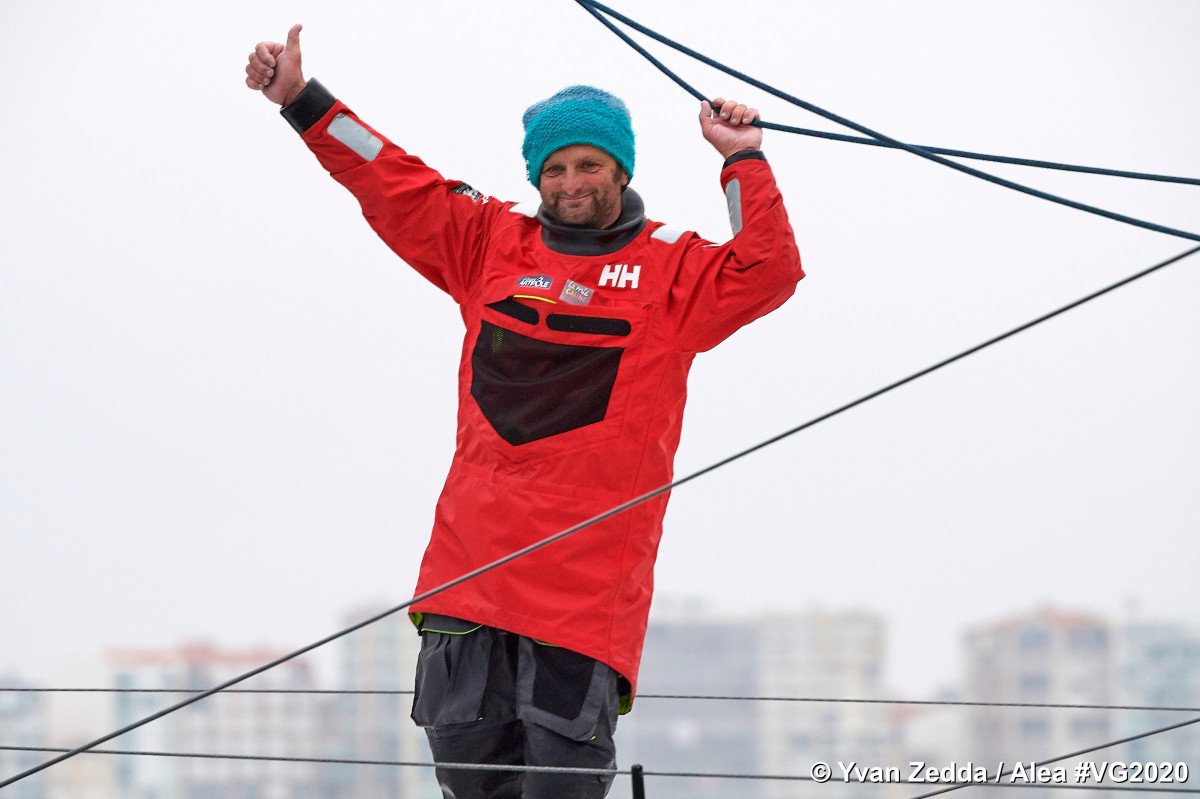 In so doing the 48 years old native of Arcachon who has lived in Les Sables d’Olonne since before his first Vendée Globe race becomes the first ever skipper to complete the solo non stop round the world race four consecutive times.

Boissières returns another solid, dependable performance, his programme big on reliability, experience and good seamanship which he complements with usually good humoured communication to ensure he remains a popular figure in his native France.

And just as he had already planned his next race four years ago while climbing the Atlantic, the skipper better known as Cali has already confirmed he wants to be back on the start line in November 2024.

Seventh in 2008-9 in 105d 02hrs, eighth in 2012-13 in 91d 02hr, and tenth in 2016-17 in 102days 20hrs Boissières struggled to match the pace of the peloton in the early stages of the race, encountering time consuming technical problems, but improved in the south where his reliaibility and regularity served him well, finally getting the better of the group of five he has been close with, outsailing them with his 2007 Owen Clarke design which started life as Mike Golding’s Ecover 3. Boissières team brought the boat from New Zealand where it was after Enda O’Coineen had to abandon the last Vendée Globe when he dismasted. Michel Desjoyeau’s Mer Agitée fitted a replacement rig and retrofitted foils before he took ninth in the Route du Rhum and 14th in the Vendée Arctique.

Boissières was previously a successful Mini 650 racer. Indeed he and this edition’s winner Yannick Bestaven grew up as contemporaries in Archachon where they built sistership Mini 650s and took first and third in the 2001 Mini Transat.

While recovering from childhood Leukemia his father brought the young ‘Cali’ to see the start of the first ever Vendée Globe in 1989.  He recalled,

“I was 17 I was suffering from leukaemia and was in the treatment phase. At the last minute, my father secured two tickets on a spectator boat to see the start of the Vendée Globe. In 1989, the event helped me get through my illness. It gave me a way to escape and to dream.”

“When you’re in a group like that, it encourages you to maintain a certain pace to keep racing. Alan (Roura) and Stéphane (Le Diraison) and I write a lot of messages to each other and we talk about our little problems. That’s nice, because it was hard to get this fifteenth place,” Arnaud Boissières said a week before the finish in Les Sables d’Olonne. This confirms once again that there have been contests going on within the fleet at every level. After sailing close to each other in the Southern Ocean, Cali, Alan Roura, Stéphane Le Diraison, Didac Costa, Kojiro Shiraishi and Pip Hare continued their race within the race up the Atlantic, fighting hard in spite of some tricky weather. They had all suffered in the long period of calm weather on their way down through the South Atlantic, before encountering rough conditions in the Indian Ocean and strong winds in the Pacific. Arnaud Boissières had his ups and downs with a series of technical problems, but managed to keep calm throughout and deal with the problems he faced. “I am by nature someone who is always happy. I am pleased that I’m still in the race,”said the skipper of La Mie Câline – Artisans Artipôle, when he rounded Cape Horn for the fourth time in his career on 12th January.

At the age of 48, Arnaud set off with the approach that this felt like his first Vendée Globe. With his foiling boat he was hoping to stay up with the ten frontrunners, but the seas would decide otherwise, which Cali calmly accepted. But on this Vendée Globe, Cali admits he faced practically the worst weather scenarios all the way round the course to the finish, believing he was being ‘punished’, especially describing his climb back up the Atlantic as his ‘worst ever’.

With the others in his group, he had to sail a long way around the Azores High to get home, adding an additional 700 miles to his route. Arnaud Boissières has managed however to look after his boat and complete the race battling it out with the others, while always offering his kind thoughts to the other racers.

He wrote a message to British sailor, Pip Hare, offered his congratulations to his ‘old mate,’ Yannick Bestaven, and commiserated with those who were forced to retire. Cali also showed his generous side as ambassador for the “Chacun son Everest” charity, which helps children suffering from leukaemia, remembering that when he was young, he had to overcome this illness. Cali can be happy again today completing his fourth solo round the world race, because the Vendée Globe is his life.

The first words from Arnaud Boissières after crossing the finish line

"It was an amazing race intense I feel like I was always in touch. I expected a little more but because the level is very high and the preparation of the boats high too. Behind the leaders we were also in a fight, that's what made the race so great, but that's also why I'm so tired. We had a great race especially with Alan (Roura) from Cape Horn. That is what I was looking for.

Four Vendée Globe is a great thing but I'm not Jean Le Cam. Jean Le Cam is out of the ordinary, I have so much respect for him, doing what Jean has done is great. Each Vendée Globe is different, this project was different, the approach was different with this updated boat even though I was not fighting for the top spots. I put extra into this Vendée Globe. Racing a fourth Vendée Globe in a row is great, I am making history, but everyone has their own story in this race. It’s so beautiful and a great story. This one will remain etched in my memory. We fought like crazy with Alan (Roura), Stéphane (Le Diraison), Kojiro (Shiraishi) and Pip (Hare). She is extraordinary, she always has a positive attitude! We don't go to sea because we need to, we choose to go racing!

Yes I have a fifth Vendée Globe in my sights. It keeps my momentum going, I would like a slightly more efficient boat maybe of the 2016 generation. I have two or three little ideas! I need to discuss it with my partners. And then, this year, my great friend wins. Yannick is my friend from Arcachon, a friend since we were teenagers. We talked and talked for a long time, about the Vendée Globe. I'm so happy for him, it's like I won with him! This Vendée Globe really has a special flavour.”