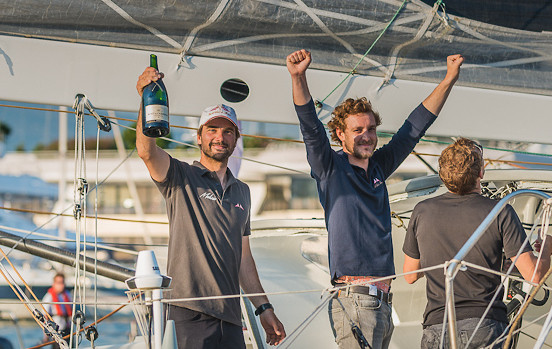 The charming 39-year-old, originally from Oldenberg, has been sailing a patient and well-judged race that has been an object lesson in how to pace yourself on the global course when managing a complex and powerful IMOCA yacht alone.

The objectives of the Seaexplorer-Yacht Club de Monaco campaign were very clear at the beginning and they were commendably modest: The goals were to make the start and then to try to complete the course. Anything more than that was regarded as a bonus.

Pierre Casiraghi has been following his old friend every step of the way around the world. He has been reflecting on what Herrmann has already achieved on a voyage that has seen him deal with a series of technical issues, but also keep his 2015 VPLP-Verdier foiler in excellent condition, while always being in the hunt for a top-five finish.

Casiraghi, 33, the vice president of the Yacht Club de Monaco, is founder of the Team Malizia sailing squad and also of the Monaco Globe Series, an IMOCA race first staged in 2018. Casiraghi has raced extensively alongside Herrmann, both inshore and offshore, and says the German skipper has struck the right balance. “Every sailor wants to preserve the boat and be competitive,” he told the IMOCA Class. “But not all of them manage it. A lot of guys were saying Boris was a bit slow at the beginning and that he was being too careful and all that, but at the end of this race, it has paid off, at least until now.”

Casiraghi says when he and Herrmann compete together, as they have done on a variety of boats and courses, he is often the one who wants to push harder, while Herrmann is naturally more cautious. He says that approach to racing – thinking of the boat before outright speed – is exactly what we have seen over the last 70 days.

“It comes definitely from Boris’s way of sailing,” he said. “It’s not like he has changed his way of sailing and adapted it to the Vendée Globe. This is how he sails generally and when we’ve raced together I would sometimes be tending to push a bit more and he would try and preserve the boat, so I know exactly what’s going on there.”

Having said all that, Casiraghi, who speaks to Herrmann every day, says he has no doubt that the German skipper will now go for it as he nears the final stages and the downwind ride to the finish. Currently in second place, and having escaped a frustrating spell in the Doldrums, Herrmann is well within reach of a podium finish if not a victory.

Will Harris, the 26-year-old Seaexplorer-Yacht Club de Monaco co-skipper, who will sail with Herrmann in the inaugural Ocean Race Europe this summer and then in the Ocean Race next year, has exactly the same feeling. He says Herrmann is now more in race mode than ever before.

“I do think his mindset has changed,”said Harris. “Since that lead that Yannick Bestaven (Maître CoQ IV) had disappeared, I think he has probably been feeling a bit more pressure, knowing he has a chance of winning or getting on the podium and thinking he is going to have to race the boat a bit harder to stay where he is.”

Harris says Herrmann has upped his intensity and the dashboard on the Team Malizia’s website, that displays a range of performance indicators from the boat, backs that up with evidence of more sail changes, rig set-up alterations and foil tweaks. “It really kind of shows that’s he’s upping his game a bit,”said Harris, a veteran of two Figaro campaigns who raced the Transat Jacques Vabre with Herrmann on this boat in 2019.

Casiraghi says Herrmann’s race has been hugely successful in inspiring youngsters in Monaco and in Germany, and promoting important messages about the environment and the health of the world’s oceans. Indeed the impact has been dramatic by a sailor who is proving an excellent ambassador both for the sport and for the organisations that his campaign has partnered with in the environmental sphere.

The Yacht Club de Monaco vice chairman says Herrmann is like an adopted Monegasque. “All the kids and schools in Monaco know about Boris and the boat because of all the different events we have done down there,”said Casiraghi. “And then all the adults know him also because it is a small place and everyone is very, very proud of him. Monaco is a very small country and to be able to shine in a sport on a world course, just brings pride. It shows that we can be small, but we can still be there and participate and sometimes even more so.”

Both Casiraghi and Harris believe that, after he has recovered from this race, Herrmann may well want to go again in four years time, having learnt the ropes this time round, should he not win next week (which is still quite possible).

“What is clear is how much he has learned from this race, firstly about himself as a sailor and as a person and secondly, about the race and what his motives are,”said Harris. “I think, for him, the Vendée Globe has always been a goal since he was 18 and moved to France to go sailing and to do this race. At this point, I can’t see him not wanting to try and come back in four years time and try and win the thing, if he doesn’t win it this time.”

Harris can give you chapter and verse on all the things that have gone wrong on the boat this time. They include a jammed gennekar halyard, that required Herrmann to climb the rig to manually release it; the loss of both hydro-generators that had to be re-built, and continual problems with the mainsail which, the team now believes, is probably too lightweight for the job.

The technical issue that could have been most threatening to Herrmann’s race was when he discovered that the motor that moves the keel rams had failed after an ingress of water. However, after much consideration, the team had decided that he should carry a spare motor – weighing in at 18 kilos – and during a two-hour operation, four days before Cape Horn, Herrmann managed to swap it over.

And the darkest hour for the German skipper? Harris has no doubt that it was immediately after he re-started racing, having diverted to help look for the PRB skipper Kevin Escoffier. That episode broke his rhythm, was stressful and exhausting and, afterwards, Herrmann was confronting the entire southern ocean leg still ahead of him after 20 days at sea.

“There is no doubt about it, the rescue diversion did take a bit of a toll,” said Harris. “It’s quite a big thing trying to find somebody in the middle of the ocean and having that responsibility on your hands, and it did take a bit of time for Boris to recover from it.”

Harris is aiming to do the Vendée Globe himself in 2024. But in the meantime he is starting to focus on the twin challenges of this year’s Ocean Race Europe and then the Ocean Race itself, when he and Herrmann will lead a team in a growing fleet of IMOCAs that will take on the fully-crewed global world championship for the first time.