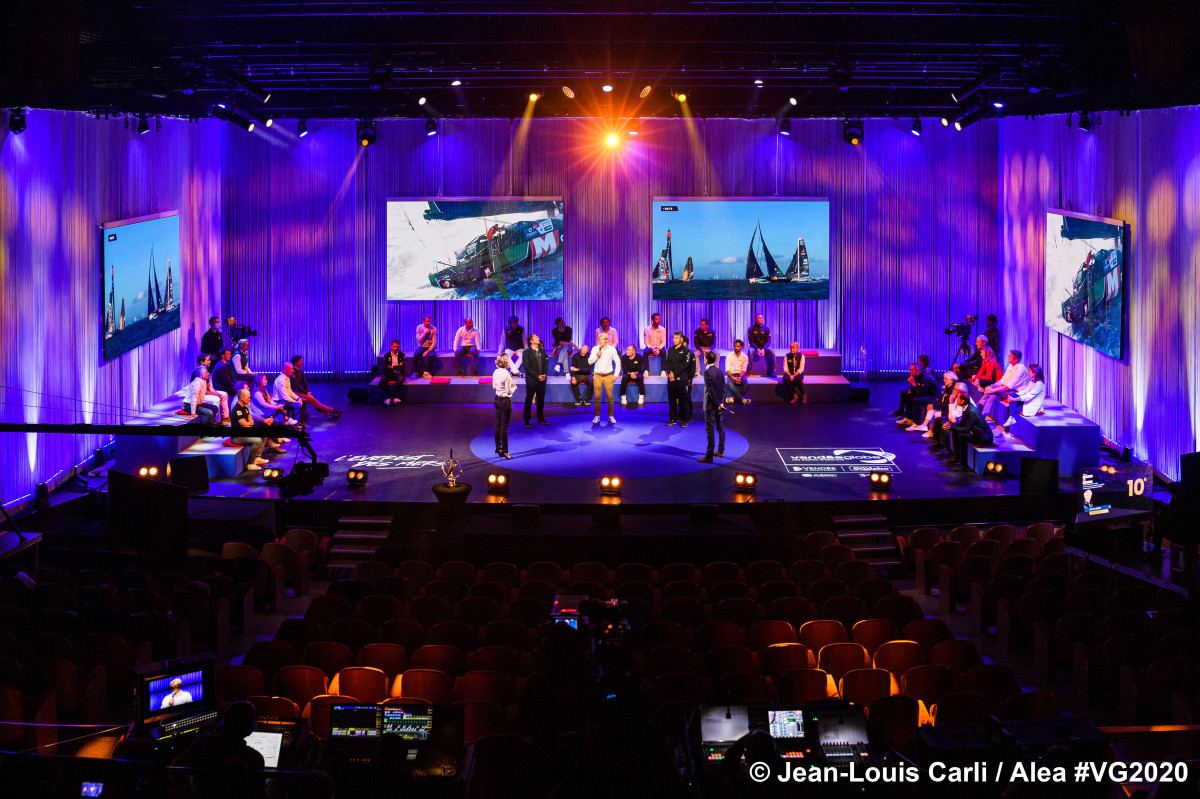 Thirty one of the 33 skippers who competed in the 9th Vendée Globe mustered in Les Sables-d'Olonne today for the official prize giving and closing ceremony which saw Yannick Bestaven (Maître-CoQ IV) receive top award as the overall winner.

There were two further key announcements, the 10th edition will leave from Les Sables d’Olonne on November 10, 2024 and the sailors should finally have a chance to meet with race fans later this year, at a popular festival to be organised on Saturday September 25, 2021!

This ninth 9th edition was celebrated today Saturday 22 May in the Espace des Atlantes, in Les Sables-d'Olonne. The health situation in France means crowds were strictly limited and it was a relatively muted affair compared to previous years. But the smiles were broad and the laughter audible as the skippers met up for the first time since the start last year, and had a great chance to finally share memories in person.

31 of the 33 skippers entered in the 9th Vendée Globe were there. Only Boris Herrmann (Seaexplorer - Yacht Club de Monaco) and Alex Thomson (HUGO BOSS) could not come. Pip Hare (Medallia, already on her way to the next edition) and Ari Huusela (Stark) both made it to Les Sables d’Olonne.

The programme featured an hour-long TV show, broadcast on vendeeglobe.org and social media. Skippers recounted their memories, the highlights including Jérémie Beyou talking of his changed perspective on racing round the world, Clément Giraud talking of his voyage of self discovery, but also the rescue of Kevin Escoffier relived and of course that epic, close battle to the finish line.

Yves Auvinet (President of the Vendée Globe)"We are staying the course: there will indeed be a Vendée Globe in 2024! And if all goes well, the start will be given on Sunday, November 10, 2024 at 1:02 p.m. We are extremely frustrated to have organized this Vendée Globe with a lot of it on camera only and not in person but we are meeting on Saturday September 25 to celebrate, if conditions allow, with all the public, our heroes of the Vendée Globe 2020-2021.”

Yannick Bestaven (Maître CoQ IV) “Winning has changed a lot of things, finishing the Vendée Globe. is already a victory. The second win was to have a partner, who trusted me and my team. And, over the course of the race, the ambitions came. I never said to myself that I had secured the victory: there were so many twists! It wasn't until the finish line was crossed that I knew I had won.  I want to get back out on the water, but on the Vendée Globe? I don't know yet, we'll see."

Charlie Dalin (APIVIA)"This here today is the last event of this edition! It's been something great today to be able to look back at the channel, the port, the finish line. I had only spent 20 days at sea before this race and so  I discovered a lot of things."

Louis Burton (Bureau Vallée 2) "Certainly the notion of surpassing oneself is very strong in sailing. When we meet a few weeks later, everyone has a great story to tell. The Vendée Globe is sailing competition at the very top level."

Boris Herrmann (Seaexplorer - Yacht Club de Monaco)"The Vendée Globe is more than a race. Between us, there are stronger bonds between humans than between us as competitors."

Giancarlo Pedote (Prysmian Group)"It's a strong emotion! The first thing I did this morning when I got here was come and see the way out the channel. All the memories flood back. We had the chance to experience something intense in emotions, exceptional. I had lots of meetings, and that's also the richness of an event like that. What unites us: the same emotions, the same difficulties”.

Stéphane le Diraison (Time for Oceans)"This Vendée Globe is so intense that I felt like I was living in another dimension. Coming back here reactivates all these beautiful emotions. It’s nice to see the faces of everyone with whom I have shared this adventure. And I'm coming back as a finisher, yes, I was so keen to come back to the end of the story! "

Didac Costa (One Planet One Ocean)“As it was my second edition, I was able to enjoy my surroundings more. The circumstances of life mean that I took advantage of my passion for the Vendée Globe before very quickly returning to my professional life (Didac is a firefighter in Barcelona), that's how it is, life is like that."

Kojiro Shiraishi (DMG Mori Global One)"I really wanted to complete this world tour not only for my mentor Yukoh Tada, but also for all the Japanese people. I must continue to race offshore for them too and open up this future to them”.