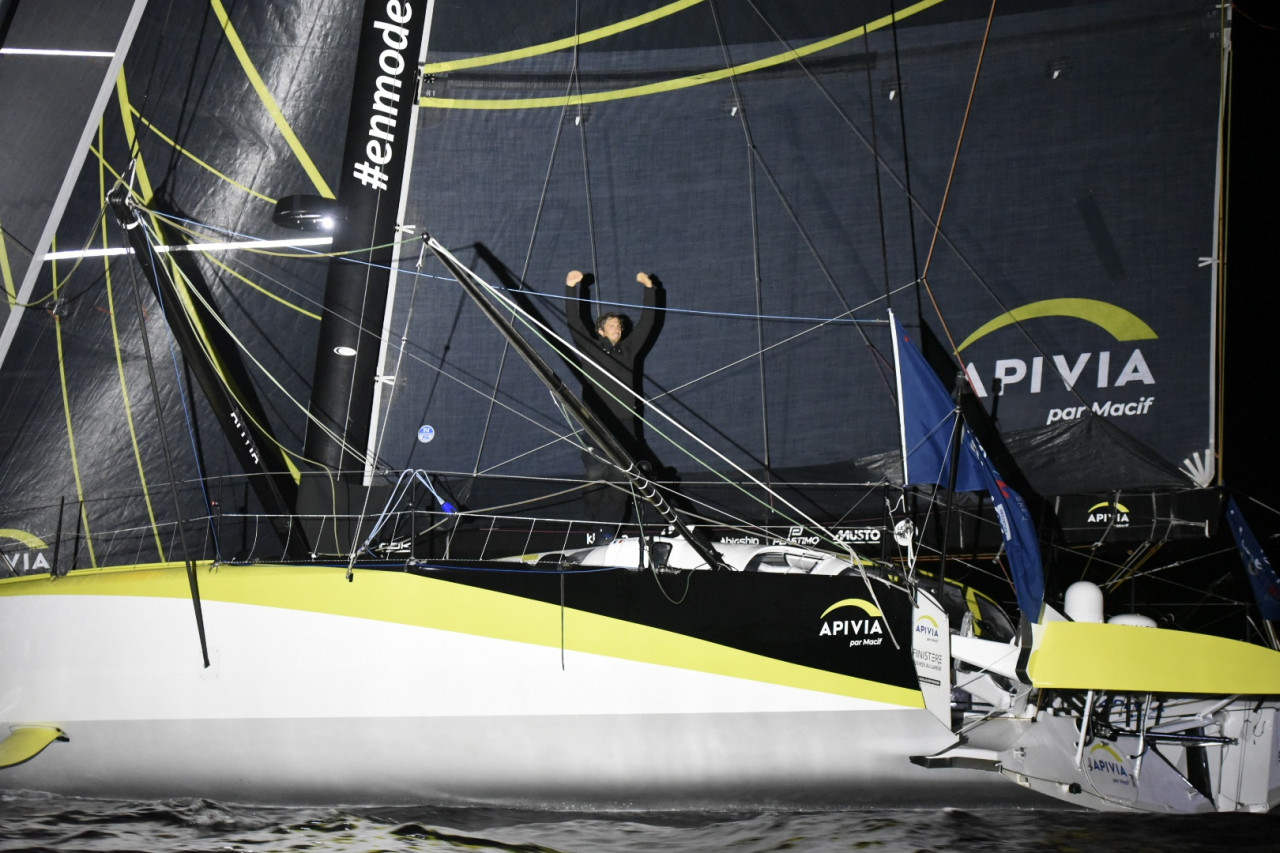 By leading the race from start to finish and continuously setting the pace, the skipper of Apivia has returned to victory. He crossed the line this Friday at 1 hour 27 minutes after 4 days, 10 hours, 47 minutes and 30 seconds of racing. A way to show that he has lost none of his will to win and that he is approaching this year more than ever with a tenfold enthusiasm.

He found his element, his habits and even his opponents. You could see the smile on Charlie Dalin's face on Sunday morning on the pontoons in Brest, at the idea of setting off again single-handed. "The last time I raced was when I crossed the finish line of the Vendée Globe," he said. The words were simple - "I'm happy to be back this season in solo" - but the determination was already palpable.

THE LEAD AND THE TRIO

And to be convinced of this, one only had to follow the trail left by Apivia on the map. Because Charlie Dalin has done his rank justice. From the start, his IMOCA pointed the bow in the lead and he never left it. For him, every detail counts. The approach to the race, the choices, the strategy must be surgically precise. When he spoke about his race after his first night on board, the sailor from Le Havre explained: "I knew it was important to have fresh air to escape to the front. There is a relentless logic to leading the charge as you head out to sea. "Once we caught the new wind, it was really coming from the front and we started to open up a gap.

Charlie says "we" because he is leading the charge as a trio. At the 'way point' Trophée Département Finistère, he is less than 5 miles ahead of Jérémie Beyou (Charal) and Thomas Ruyant (LinkedOut). At the Fastnet, 20 miles separate them. The Apivia skipper is amused: "We have been racing in contact since the Vendée Arctique 2020! The same thing happened in the 2021 Transat Jacques Vabre and again this year. A "logical" three-way battle, since each of us "combines the performance of our boats with our experience".

He also knows that the truths of a moment, at sea, can change at any moment. Towards the Fastnet, the 35 knots of wind forced him to be constantly vigilant. "It was quite sporty with a lot of maneuvers, sail reduction, headsail changes...". He also acknowledges that he "put comfort to one side". But it paid off and the gap widened a little more when he reached the Gallimard way point. He is now 4 hours ahead of Jérémie Beyou and more than 7 hours ahead of Louis Burton (Bureau Vallée), who has stolen third place from Thomas Ruyant, victim of a steering system problem.

The climb back to Brest is not a triumphal march. "The last stretch is more difficult than it looks," he confided, as "the ridge of high pressure pushes very quickly behind. The sailor is becoming a fine tactician - "I spend a lot of time in front of the computer in front of the files" - and assures that he will not give up. "Push Charlie, push", he says in reference to the F1 drivers.

THE PLEASURE IS ALL THE GREATER

While a zone of softness formed and played with the nerves of all those chasing him, he managed to keep a straighter course. His pace is slower - 10 to 11 knots on Wednesday night - but more consistent than his companions. At the latitude of Ushant, he is getting some air and can serenely complete this Guyader Bermudes 1000 Race on Thursday night.

Charlie Dalin's joy is all the stronger as fate seemed to be getting the better of him. There are inevitably memories of the Vendée Globe. A circumnavigation that took him almost halfway around the world (48%), finishing first at the finish line before being reclassified second. Then the Transat Jacques Vabre last fall with Paul Meilhat and 2nd place again. He confided, upon arrival in Martinique, that he lacked "a few small ingredients"and "a hint of success". Charlie sometimes has the words of a striker who struggles to hide his frustration when the goals are not there. But the pleasure is all the greater when success is rewarded. And this is what he felt this Thursday in Brest, one of his evenings that will certainly have a place of choice in his memory box.