D-27 Vendee Globe : Miranda Merron – delighted to be in good female company in the Vendée Globe 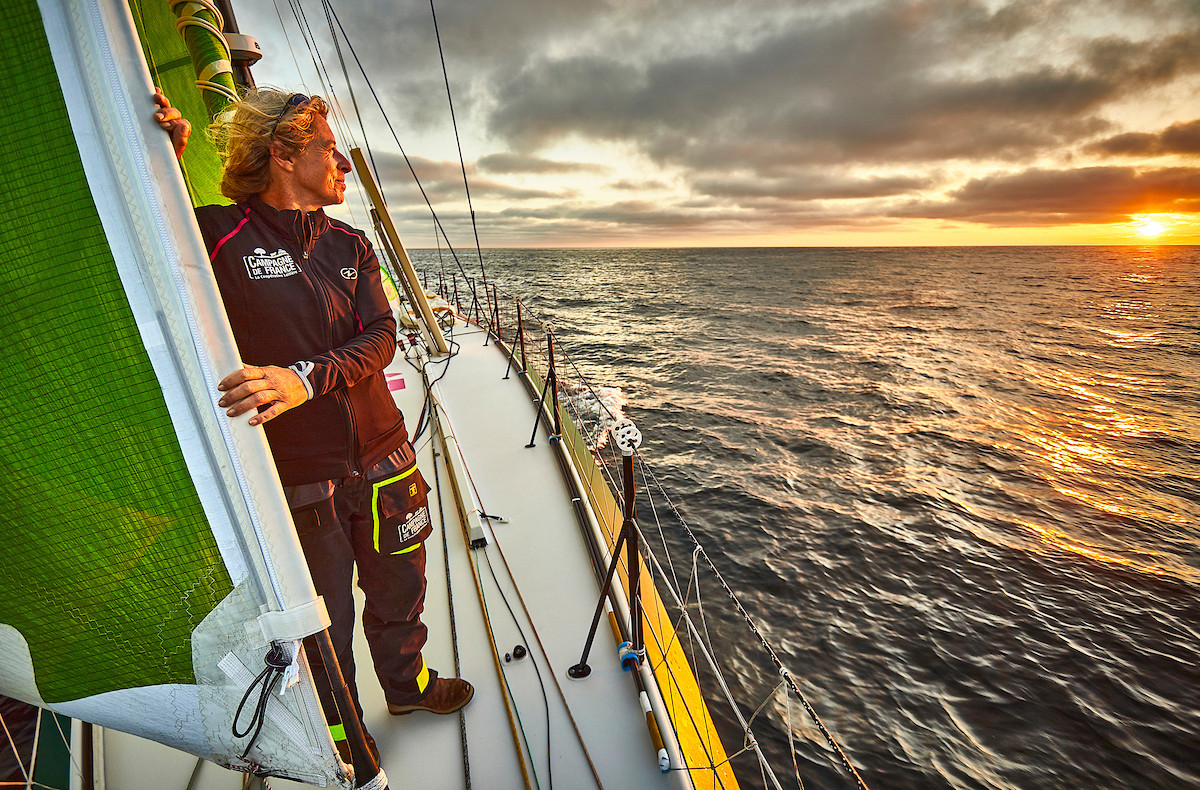 ROAD TO THE VENDÉE GLOBE #5: In the latest of our series of preview articles in the lead-up to the Vendée Globe start on November 8, Ed Gorman talks to Miranda Merron about female skippers and her own campaign.

One of the most encouraging aspects of this year’s Vendée Globe is the participation of female sailors with a record-breaking six skippers taking the start, among them Miranda Merron on Campagne de France, one of the most experienced sailors in the fleet.

This year’s compliment almost matches the total number of women who have ever attempted the Vendée Globe. This stands at just eight sailors in 20 years, among them Britain’s Ellen MacArthur, Dee Caffari and Sam Davies – who goes again this year in Initaitives-Coeur – and Isabelle Autissier and Catherine Chabaud of France.

The last race had no female skippers at all and there was only one women skipper in each of the previous two editions before that. You have to go back to the 2004-2005 race to find more than one on the startline when Anne Liardet and Karen Leibovici took part.

Merron is delighted to be in good company in 2020. “It’s great, really good,” she said recently during a break from her preparations. “They are all really nice women too and some of them are very good sailors with very well funded good boats.”

She says the female portion of the fleet divides between three skippers who are “wealthy” in terms of sponsorship – Davies, Clarisse Crémer on Banque Populaire X and Isabelle Joschke on MACSF – and three who are not so wealthy – Merron, fellow Briton Pip Hare on Medallia and Alexia Barrier on TSE-4MYPLANET.

But while six skippers is an improvement, she understands why female skippers still represent less than a fifth of the overall fleet. “The reason why there are less women in the high end of extreme offshore racing generally is that women might have families, or children, or partners who don’t approve and other commitments,” she explained.

“It’s really hard to get to the startline of the Vendée Globe, especially if you have a limited budget,” she added. “And you can’t do that if you have ambitions of a career elsewhere or you have a family and children and you don’t have a lot of support around you. That’s not the case for men, I think.”

While she supports the ambitions of the IMOCA class to keep increasing the participation of female skippers in the Vendée Globe and other races, she says all the current female skippers are in agreement that this cannot be forced. “You cannot force parity – it needs to come naturally,” she said. “In France it’s easier for women to progress into the top end of the sport compared to other countries, but my view is, if you are woman and you want to get into it, you have to set up your own project.”

Cambridge University–educated, Merron, aged 51, has enjoyed a long and varied professional sailing career with many years in both IMOCA racing and Class 40s, much of it in partnership with French sailor and partner Halvard Mabire. This is her first attempt at the Vendée Globe and she is not making any secret of the fact that her main goal is simply to finish in her 2006-vintage Owen Clarke-designed IMOCA.

“It would be huge, huge, to finish,” she says laughing. “It’s a very long way around the world – it really is. Everyone is talking about the Vendée Globe as if it’s a racecourse in the Bay of Quiberon. It’s not. It’s really a very long way and it goes to places where mankind simply shouldn’t go.”

She will also be pacing herself against two reference times for her boat – it got round in 90 days in the hands of Swiss sailor Dominique Wavre in 2012-13 and in 107 days with the American skipper Rich Wilson in 2016-17.

But her real race is likely to be against three other skippers in boats of similar age or even older – Alexia Barrier’s TSE-4MYPLANET, Pip Hare’s Medallia and Ari Huusela’s STARK. “Can I beat those three?” she asks. “Yes I think I can, but they can also beat me – there are no bad sailors in the Vendée Globe.”

Merron is hoping that the three women with the faster boats will do well. “It would be great to see one of them make a big impression at the top of the fleet,”she said. “I hope that will happen. I think Sam and Isa could do really good things; Clarisse has by far the best non-foiling boat and she sails it pretty well and that boat should do really well,”she said.

Merron has been around the block but is not saying this race will be the last in her career. You sense that the excitement and draw of Class 40 racing is likely to entice her back on the water, whatever happens in this Vendée Globe. She says it was hard to adapt to the idea of sailing an older boat that cannot win but she has comes to terms with that.

Ever-modest, she also says she is now much better suited to the challenge of solo long-distance racing that when she was younger. “This will probably be the hardest thing I will have done since my early solo races,”she said. “But mentally, the older I get, the better I am. I am now kind of quite happy racing solo, whereas before there would be highs and lows.”

One new addition to her life on board is a WhatsApp connection which she tried out for the first time during the Vendée-Arctique when she and Sam Davies kept in touch.

For non-French readers, her principal sponsor – Campagne de France – with whom she has been working since 2011, is a national producer of fromage frais. While we were talking about this on Skype, Merron got up from where she was sitting in her kitchen and produced a tub from the fridge behind her. “It’s delicious,” she said with a big smile, “really, really good.”

Like most other campaigns in the race, almost all of her sponsor commitments in the build-up to the start have been cancelled because of the pandemic, but Merron is delighted that Campagne de France have now introduced a picture of her boat on its products sold at supermarkets.

“Now we are getting school children – who get fromage frais at school – asking their teachers about the boat and asking how they can follow the race, which is great,”she said.

For the record Merron’s other sponsors are the Department of La Manche and the Region of Normandy.

15.09Dalin wants to win – even the speed…Immediately after APIVIA had finished he…15.09Beyou: we can’t sail this time but …Jérémie Beyou is the defending Défi Azim…13.09Mālama and Alaka'i: a tribute to oc…Today, 11th Hour Racing Team officially …13.09Bureau Vallée tests T-rudder!Throughout the summer, Louis Burton and …10.09ALVA YACHTS is building IMOCA for t…With this new racing yacht, German skipp…03.09The Making of IMOCA 60 11.2 - Ep 2 …Dive below the surface of the colorful a…
All news and videos

Companies in Bretagne Sailing Valley®, Gearing Up for New Challenges!

From 14th to 19th September, the Défi Azimut-Lorient Agglomeration reunited IMOCA skippers come together for five days of racing; a unique opportunity to showcase Brittany’s sector of excellence in the technology of comp…

During a press conference organised by the Yacht Club Italiano on Sunday evening, the Italian Minister of Tourism, Massimo Garavaglia, gave his full support for an Italian entry in the next edition of The Ocean Race, sch…