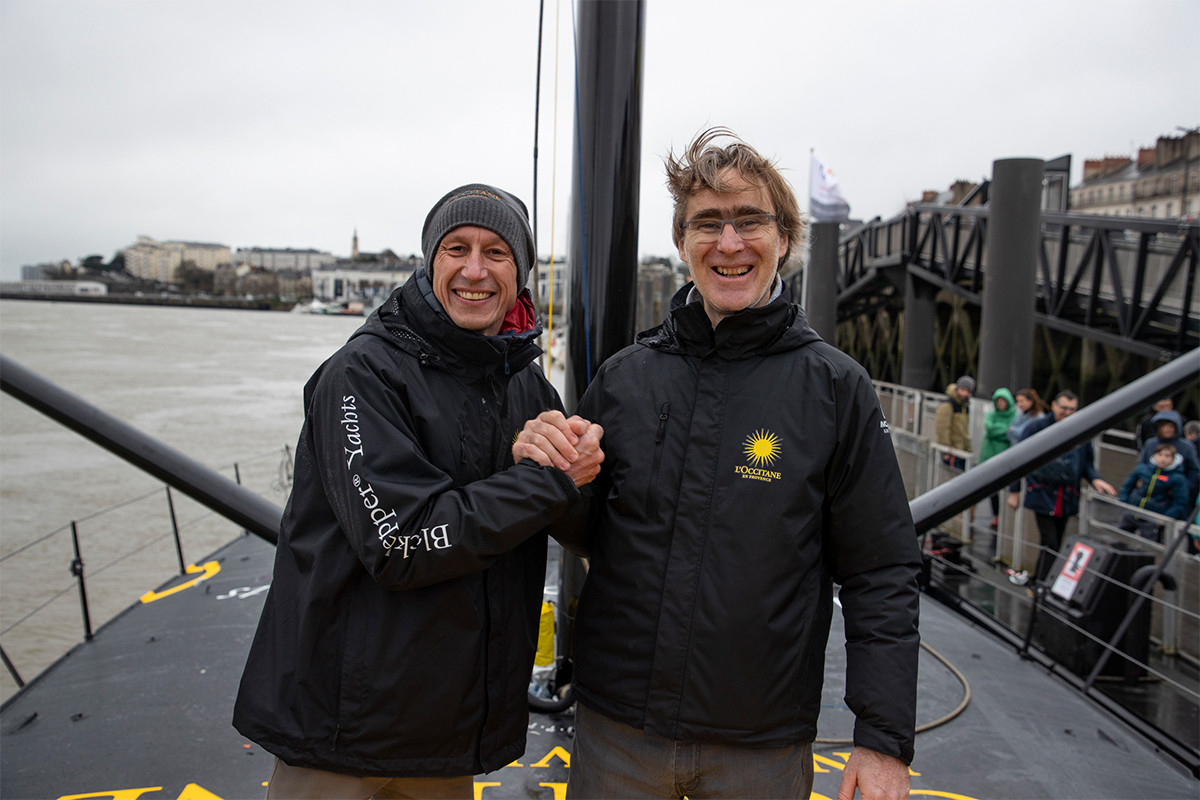 ROAD TO THE VENDÉE GLOBE #4: In the fourth of our series of preview articles in the lead-up to the Vendée Globe start on November 8, Ed Gorman talks to Sam Manuard about the new L’Occitane en Provence.

Sam Manuard is looking forward to the Vendée Globe and to what he calls the next chapter in the “great adventure” that he and Armel Tripon’s team have been enjoying with their new boat L’Occitane en Provence.

The mean-looking IMOCA in black and gold trim with the scow bow, and with its foils protruding from just below the sheer line, has impressed with its raw speed during the Défi Azimut. Although it has had to have more work done to reinforce its structure, Manuard is now happy that his first venture into the IMOCA fleet is ready to go.

“We have addressed the issues that we discovered and I have no bad feelings about that, so I am pretty confident,” said the 49-year-old designer who is based in the Breton town of Vannes. “The boat is subject to super-high slamming loadings and we had to reassess the structure a little bit to take account of those loads.”

Manuard may be new to the IMOCA class but he has a long pedigree in Minis and Class 40 design and he knows the most important goal is simply to finish this race. “I think if we finish the Vendée Globe then I am pretty confident the ranking will be pretty good,” he said.

“So it’s really a matter of finishing the race and I am sure that if we do that the boat is fast. There will be some breakages on the new boats, as we have seen in the last editions, but if you have a good boat and you finish, you will probably be in the top-three or four.”

With just one boat in the fleet from his board, you might think Manuard would be feeling the pressure to achieve the sort of performance he had intended for it, but he is relaxed about what lies ahead, as he explained.

“I am not too anxious – what we have done in terms of performance and the dynamic behavior of the boat – in waves, in squalls and in gusts – I am quite happy with because it is in line with our design goals. So that removes a lot of the pressure, I guess,” he said.

One of the features of the new boat, which was built in Hungary and then at Black Pepper Yachts in Nantes, is the facility to withdraw the foils and yet still sheet the headsails properly. Manuard believes this is an important option for Tripon when he needs to tame the boat’s power.

“We said to ourselves that there can be times in the race when you want to switch off the foiling mode or reduce it,” he said. “It is a very tough race and you can find yourself in a difficult environment where you’d be happy to have a mode where the boat doesn’t accelerate too much, so we wanted to be able retract the foils as much as possible from a safety aspect.”

He also believes the boat will work well as a platform for a full crew. “We focused 100% on the Vendée Globe and all the design features and all the decisions were taken with that in mind,” he said. “Nevertheless there will be a lot of similarities between what is important for a boat that is efficient for the Vendée Globe and for the Ocean Race. And some decisions that we have taken are in line with what you need for the Ocean Race. For example, the cockpit is pretty far aft with big companionways so that we have a roomy space inside. The volume inside is good and I’m sure that living with five or six people on board will be perfectly OK.”

Like almost every one else involved with the Vendée Globe 2020, Manuard is concerned about the stress on skippers at the front of the fleet, sailing the most extreme boats produced in the IMOCA class so far on their own around the world.

“In my opinion, in this Vendée Globe, all the designers and skippers are all agreed that the (performance) bar has moved a lot higher,” he said. “And I think that we have developed some boats that are quite monstrous in some respects. The boats are really brutal, so the question is: will they survive? And will the skippers survive through this brutality? We’ll see.”

Manuard is used to watching from home as his boats go off across oceans. But the Vendée Globe will be a new experience. “There is always more anxiety following a race from on land than actually going racing yourself,” he said. “For sure, it is a super-tough race and they will be going to nasty places as well, so yeah, I think I will be anxious at times.”