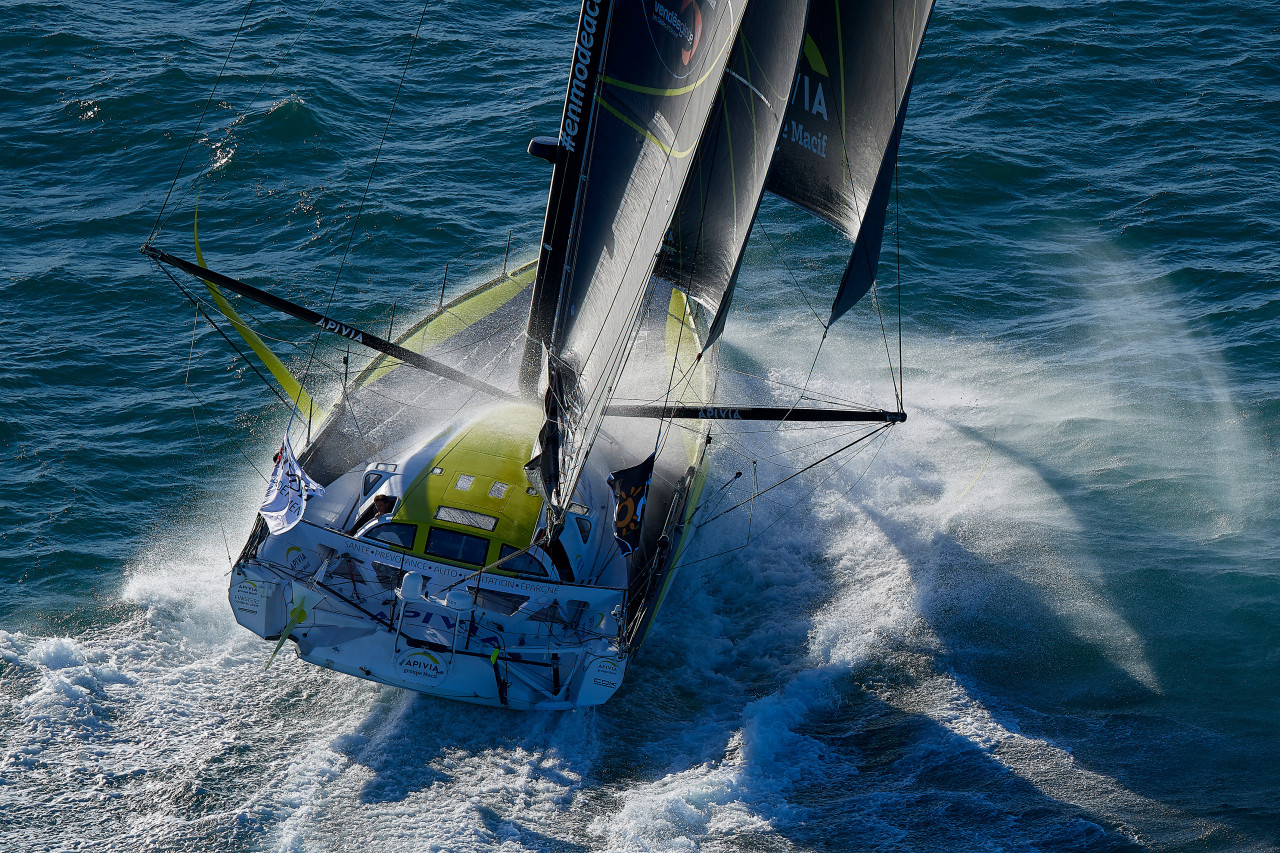 Leaders 20 miles apart, Herrmann in fifth, Merron At Cape Horn at Weekend. Today passing Salvador de Bahia, Brazil, there are no options In terms of strategy and choices on the northwards climb up the Atlantic for the tightly matched Vendée Globe leaders.

But the conditions are difficult and tiring. The E’ly tradewinds shift in direction and more particularly in strength and that is proving especially wearing, with squalls and gusts which make setting the optimum sail are difficult on the close reach.

Apivia skipper Charlie Dalin who has led now for two days is now 20 miles ahead of second placed Louis Burton on Bureau Vallée 2. The pair have been consistently quicker than the four other key rivals round about them.

One month ago when he was SW of Tasmania Dalin had to repair the bearing which secures the foil as it enters the hull aperture on his port side. He is paying a price for not having full use of the large hydrofoil as he tries to get away from Burton who is racing a 2016 generation boat, but the leading skipper remains objective,

“I have to fight with the weapons I have.”He told the Vendée Globe Live show today, “One month ago I came close to abandoning so I am just glad to be here, but we will be on starboard for a long time for sure and it has already started. I'm not sure we don't have to tack in the Doldrums because it looks rather interesting and challenging right now. There will be a lot of sail changes to be made, reefing, reefing so that will inevitably play out. But overall there is a lot of starboard tack in the trade winds of the northern hemisphere. The routing of the Doldrums appears to be quicker and easier  in theory than in reality so we have to be wary of any timings, ”warned the French skipper who grew up in Le Havre and was French Offshore Champion in 2014 and 2016.

“I cannot fully deploy my foil but I can press on it at a certain heeling angle and more so I have a little bit of downforce but nothing like I would normally have had if it were fully deployed. The speeds that I could be at without this compromise are nothing like those I am sailing at now, but, hey let us keep it in perspective because my Vendée Globe could have stopped in Australia or new Zealand but here I am one month on, leading the race. This is just a bonus! It is great ! I am very happy and I will do everything to keep the lead and get to the end ”.

For all that, Dalin has been quicker during today making 16kts, only outpaced by Germany’s Boris Herrmann who is steadily coming into his own now as the winds build to more consistent foiling conditions. The sailor from Hamburg is up to fifth place and was making 17kts this afternoon, but at the same northing, the same latitude, as former leader Yannick Bestaven who lost 435 miles to the chasing pack in the transition through the Cabo Frio cold front, and is sixth this afternoon.

“Being fifth is a bit nominal, north-south Yannick and I are in the same position. It must be tough for Yannick I feel a bit sorry for him, but I hope he catches up and we all make it a good race together, exciting. Thomas Ruyant said he can see us all finishing on the same day, that would be really cool!”explained Herrmann this afternoon,

“Last night was really bad. I had a 26 knot gust and was afraid of breaking stuff and so I feel a bit knackered, tired. It is not as warm as two days ago when it was super warm, unbearable. During the daytime in the bunk I don’t sleep, I just get a headache. There are little things to complain about, but the race is absolutely amazing, fantastic. You almost wish to accelerate this game, like a time-lapse to see what happens. I am hoping to keep making miles but that is not so, so much in my hands. Some good wind tomorrow should allow me to foil towards the front.”

Weather routings have the leaders crossing the Equator Saturday before breaking into the NE’ly trades. A transition zone around the south of the Azores high pressure could be the only minor pothole on what looks to be a quick passage to Les Sables d’Olonne.

After making her repair to the boot seal around the lower bearing of her port rudder, and taking a 150 minute penalty (visible to those tracker addicts) as he lost her liferaft and additional penalty for a broken seal Britain’s Pip Hare is back on track on 18th placed Medallia, chasing 17th placed Stéphane Le Diraison, 140 miles in front of her. Miranda Merron is just under 900 miles to Cape Horn on Campagne de France and should make her first solo passage of the rock at the weekend.