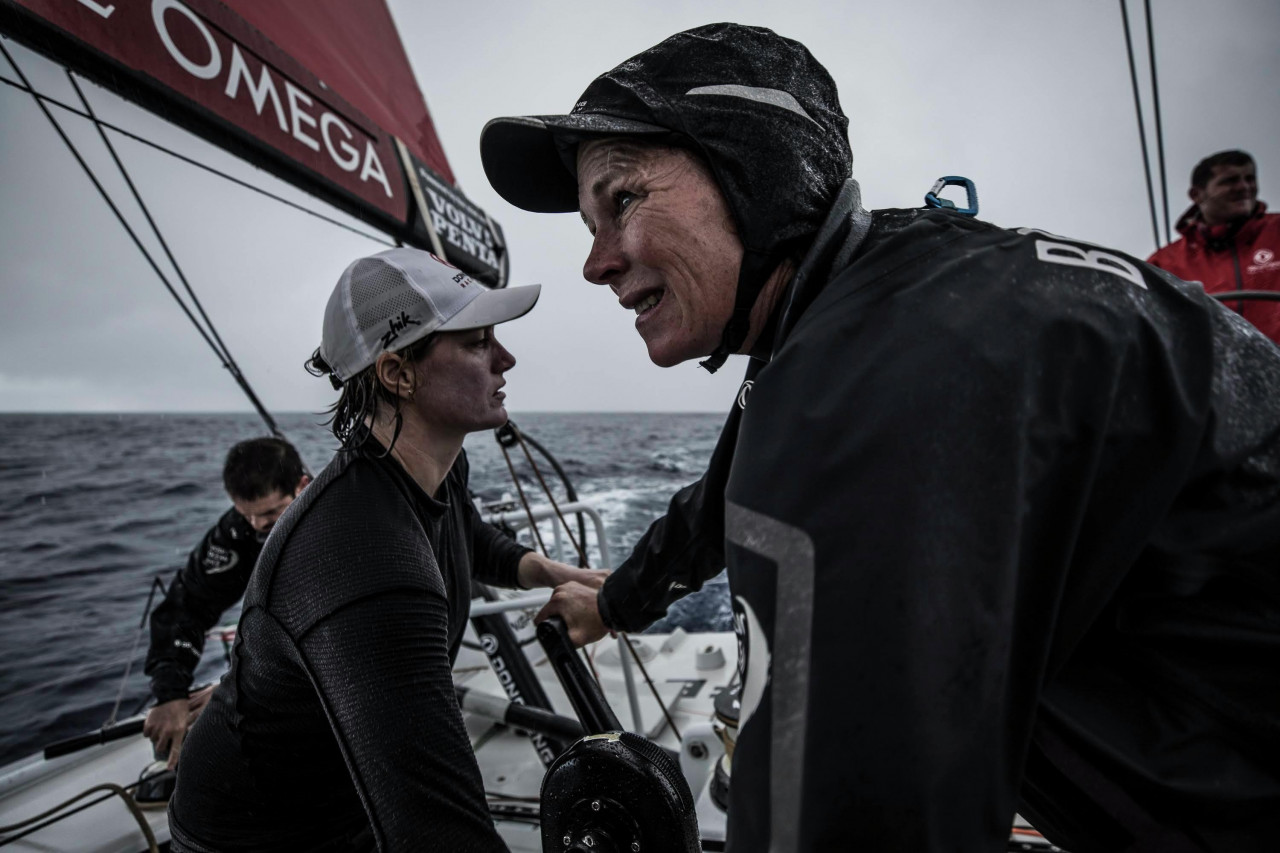 In the third part of our series, IMOCA and The Ocean Race explore this titanic human adventure, a race that is both unique and magical despite the enormity of the challenge, and whose international teams have recruited a plethora of French sailors including Sidney Gavignet, Jacques Vincent, Pierre Mas, Hervé Jan, Jean-Yves Bernot and Marie Riou.

Over the years, the Whitbread Round the World Race, as it was originally known, has steadily become professionalised. 1994 heralded the arrival of the WOR60, a sign of how the event was evolving with the first dual rankings: the IOR Maxis and the WOR60. The Whitbread was deemed to be an absolutely unique human adventure and young racers boasting backgrounds in Olympic sailing or America’s Cup no longer thought twice about applying.

A Frenchman was among the first to get on board and soon acquired a following. During the inaugural edition in 1973, a twenty-year-old from La Baule, a silver medallist on the Flying Dutchman class at the Munich Olympics a year earlier, dreamed of the open ocean and was keen to ‘step outside his comfort zone’ and get a taste of crewed sailing. He goes by the name of Marc Pajot and he decided to write to Éric Tabarly to ask him for a ride on Pen Duick VI, explaining that he doesn’t have any offshore experience, but he is competitive. This prompted the remark from Tabarly as he decided to hire the young champion: “A guy who won an Olympic silver medal at 19 years of age is bound to know a thing or two about how to trim and helm…”

The most international of Frenchies

After a first Whitbread on La Poste in 1994 with Éric Tabarly, Sidney Gavignet linked three editions of the event, known by then as the Volvo Ocean Race, as part of a series of international crews: with the Swedes on Assa Abloy in 2001, the Dutch on ABN AMRO ONE in 2005 and the Americans on Puma in 2008.

Together with Jacques Vincent, he was one of the first French sailors to be signed up by an overseas crew. “After my first round the world on La Poste, I did a lot of match racing,”recalls Sidney. “Following a World Championship in Croatia with the Dutch sailor Roy Heiner, I spoke to him about my desire to do another Whitbread. A few weeks later, I joined the Assa Abloy team, which then paved the way forward.” When a French sailor rocks up in an international crew, they bring with them a certain set of clichés. “It ranges from the team lunch where you fancy having your coffee on the sofa to the classic jibes about the French passion for condiments to accompany freeze-dried dishes. That’s where you realise that you’re French… and proud to be so,” explains Sidney, who acknowledges that he has always been someone drawn to the rigorous management synonymous with Anglo-Saxon projects.

“Back then (in 2001), although the crew already had a very professional approach, there were still sailors who weren’t very good helms or trimmers though they had technological skills”.  Sidney was famed for his talent as a helmsman, whilst being able to focus for long periods and adapt to the monastic living conditions aboard.

When it came to hiring crew for round the Worlds, Jacques Vincent was an absolute must and someone who wasn’t required to send his CV to a team manager or skipper. Former crew to Bruno Peyron, he competed in his first Whitbread in 1989 on the Maxi ketch The Card, skippered by Swede Roger Nilson, which also featured Johan Salén, the race’s current Managing Director. The Frenchman then got a ride on the WOR60 Tokio with Chris Dickson in 1993, before doing two editions with Norwegian Knut Frostad, in 1997 on Innovation Kvaerner, then in 2001 with Djuice Dragons, where he systematically took up the post of watch leader. There was a desperate need at the time for good helms capable of surfing the Southern Ocean swell under a spinnaker for hours on end.

Compatriot Pierre Mas would also take on the role of helmsman and watch leader for two editions, with Laurie Smith on Intrum Justitia then Knut Frostad on Innovation Kvaerner. Hervé Jan was very much in favour too and competed in five consecutive editions between 1989 and 2002, systematically crewing for boats sailing under an international flag. Router Jean-Yves Bernot was also taken on in the strategic role of navigator. Evidently, the Volvo Ocean Race became virtually a prerequisite in ocean racing circles.

Considered to be ‘raving mad’ by veterans

“The human being in a crewed round the world race is not important, they’re simply essential”, explains Sidney Gavignet. “We lived together in a cramped, noisy, wet and foul-smelling space for nine months… When Paul Cayard (former World champion in the Star class with four America’s Cup campaigns to his credit) stepped aboard in 1997 as skipper of EF Language, inevitably he wasn’t the best offshore racer and had never spent more than three nights at sea. However, he was a true leader and was immediately approved unanimously.”  What’s more, on his first participation, the French-American won the event.

A genuine icon in Brazil, Torben Grael, five-time Olympic medallist, clearly made a similar impression in his two participations, with one third place and one victory on Brasil 1 and Ericsson4 respectively. Supported by a great entourage, the Brazilian proved to be a charismatic leader, who also knows how to make concessions in high pressure moments. All these exceptional champions competed in the round-the-world race with the goal to win. They brought with them a new vision, helming their boats exactly as they would in a round-the-cans race, and often considered to be ‘raving mad’ by the race’s veterans.

Called upon to help out – Swedish sponsor Intrum Justitia having had Roger Nilson replaced, officially because he required knee surgery, unofficially after he posted a less than convincing start to the race - Lawrie Smith broke the mould. Indeed, not only did he become the only skipper to compete in the same Whitbread 1993-1994 on two different boats, he also set a new 24-hour distance record (428 miles).

Before setting sail from Auckland bound for Punta del Este via the infamous Cape Horn, Smith asked the crew to lose weight and take just one pair of shoes. As such, the crew opted for leather boots, which they would go on to pull apart and turn into sandals during the climb up to Uruguay. However, virtually all of them suffered from serious frostbite in the Furious Fifties, as boots weren’t that waterproof at the time. Be that as it may, Lawrie Smith and his highly cosmopolitan crew won that leg in WOR60.

“To my mind, it’s the Kiwis who opened the door to youngsters with a background in dinghy sailing. They’re the ones who championed a broader way of thinking, which gained widespread acceptance. When I learnt that the Volvo Ocean Race rules allowed for a youngster aged under thirty aboard each boat, I thought that was fantastic.” The prime examples were doubtless Peter Burling and Blair Tuke, twice winners of the America’s Cup and Olympic 49er champions, who competed in the last Volvo Ocean Race between two campaigns, having rarely sailed offshore before. Whether or not it was a coincidence, it would seem that the Olympic 49er skiff is a fabulous melting pot for future round-the-world sailors.

Fellow Olympic champions before them - in Athens in 2004 - Spaniards Iker Martínez and Xabi Fernández excelled in round-the-world races, whether it be in crewed or double-handed format, as evidenced by the Barcelona World Race 2010-11, the two-handed non-stop round the world race in IMOCA. The pair finished second on Michel Desjoyeaux’s Farr design, which had won the Vendée Globe a year earlier, just shy of champions Jean-Pierre Dick and Loïck Peyron.

Today, The Ocean Race is a vivid demonstration of the extent to which the gender diversity set out in the rules is now paving the way for female Olympic champions like French sailor Marie Riou and Dutch sailor Carolijn Brouwer, winners of the 2017-18 edition on Dongfeng Race Team skippered by Charles Caudrelier, and Brazilian Martine Grael, Torben’s daughter, who before and after her round the world with team AkzoNobel, secured Olympic gold in Rio and then Tokyo.

When you ask Sidney Gavignet about the sailing conditions in recent editions, with the crews submerged under great torrents of water, and the stunningly beautiful on-board shots, his response is unequivocal: “To my mind, IMOCA has the right approach with protected cockpits as well as astounding performances. It comes with a whole raft of experience and the positive aspect of the Vendée Globe, which is taking things in the right direction. I think they’ll have a ball… If I had one sentence to sum up The Ocean Race , a race that’s as tough as it is magical, I’d say that it’s a marathon with the intensity of a sprint, both at sea and on land!”.