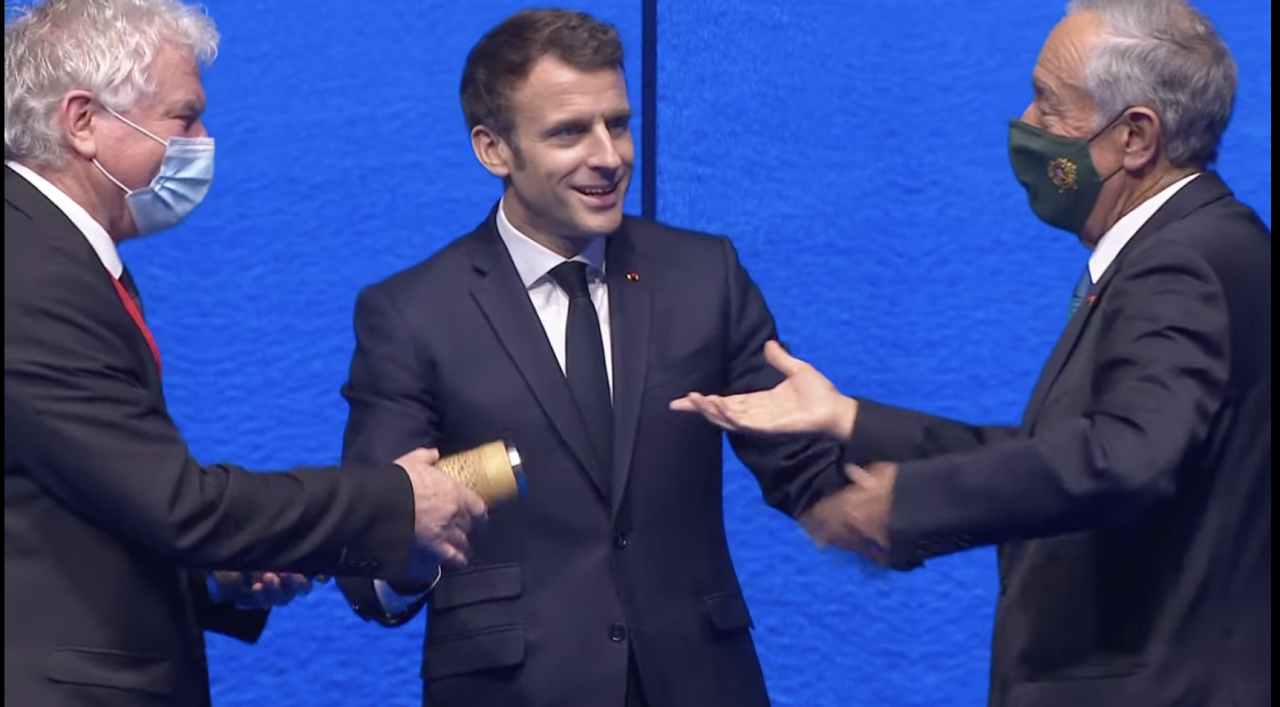 Earlier today, Nature’s Baton, the symbol of Relay4Nature, was passed from the French President Emmanuel Macron to the President of Portugal, Marcelo Rebelo de Sousa, at the landmark ocean conference in Brest, France

Relay4Nature, an initiative highlighting the inseparable connectivity of the issues affecting the planet and the collaborative solutions that are needed, featured in the closing moments of the One Ocean Summit in France this afternoon, where it was passed from French President Emmanuel Macron to the President of Portugal Marcelo Rebelo de Sousa.

Alongside UN Secretary-General’s Special Envoy for the Ocean Peter Thomson and Mayor of Brest François Cuillandre, President Macron addressed the world’s heads of state, politicians and leading ocean advocates: “The baton has been passed here in Brest to Lisbon,” he said, handing over Nature’s Baton to the UN Ocean Conference in Portugal, which will take place in June.

The One Ocean Summit by the French Presidency of the Council of the European Union, with the support of the United Nations, started on Wednesday 9th February with the aim of increasing international action for the ocean and driving tangible commitments at the start of the second year of the Ocean Decade.

Relay4Nature, which has been developed by The Ocean Race in collaboration with UN Secretary-General’s Special Envoy for the Ocean Peter Thomson, has been at the event to help champion the ocean and highlight that the critical issues affecting our planet are connected, by creating a ‘blue thread’ between the major events where decisions about the environment are made.

Race Chairman of The Ocean Race Richard Brisius said: “We are honoured that President Macron has supported Nature’s Baton on the world stage and is helping to drive action for the ocean. The One Ocean Summit has been a success and the commitments we have heard here in Brest from President Macron and other world leaders are impressive.

“Healthy seas are critical to all life on Earth, which is why we are committed to giving the ocean a voice at the major conferences like IUCN World Conservation Congress and COP26, connecting these critical moments and the issues affecting us all.”

Relay4Nature sailed into Brest on Tuesday, where it was welcomed to the One Ocean Summit by the Mayor of Brest François Cuillandre and Special Envoy of the President of the French Republic, Olivier Poivre d'Arvor.

Skipper Alan Roura, a two-time competitor in the Vendée Globe, and Aloïse Retornaz, Olympic medallist at the Tokyo Games in the 470 class, sailed the Baton to Brest from Lorient on Roura’s IMOCA 60 boat, accompanied by Ambassador Thomson and Race Chairman Richard Brisius.

UN Secretary-General’s Special Envoy for the Ocean Peter Thomson said: “Nature’s Baton is on an epic journey linking the environmental, biodiversity, climate and ocean conferences. 2022 is the year we can stop the decline of the ocean’s health and Nature’s Baton will remind us all that this is possible and that we are all connected in meeting this challenge.”

On the eve of the Summit earlier this week The Ocean Race’s Sustainability Director Anne-Cécile Turner spoke about the organisation’s pioneering onboard science programme as part of the launch of The Odyssey Project, a new initiative to strengthen understanding of the seas. Endorsed by the UN Ocean Decade, the project aims to enhance the Global Ocean Observing System (GOOS) and drive greater collaboration to protect the seas. The Ocean Race signed the Brest Declaration to further support the initiative and during the conference backed the ‘Seafarers’ appeal for the oceans’ in solidarity with the sailing and maritime industry.

Last year Relay4Nature featured on the world stage at the IUCN World Conservation Congress in Marseille and United Nations Climate Change Conference (COP26) in Glasgow, gathering messagings from a range of ocean advocates about the action that they want world leaders to take to safeguard our seas. Nature’s Baton also had a leading role in the inaugural edition of The Ocean Race Europe, with alternating teams taking the baton for each leg, before handing it to local dignitaries and ocean advocates in the stopover cities. Along the way the baton has collected messages from influential voices, including HSH Prince Albert of Monaco, European Commissioner for Environment, Oceans and Fisheries, Virginijus Sinkevičius, Co-Chair of Friends of Ocean Action and former Deputy Prime Minister of Sweden, Isabella Lövin and Director General of WWF, Marco Lambertini.

Relay4Nature is part of The Ocean Race’s multi-award winning ‘Racing with Purpose’ sustainability programme, which brings together a range of tangible ways that we can have a positive impact on the marine environment. Working with 11th Hour Racing - the Founding Partner of the Racing with Purpose programme and a Premier Partner of The Ocean Race, The Ocean Race is holding high-level summits to drive global decision-makers to create policies to protect and govern the ocean, contributing vital data about the state of the seas to leading scientific organisations, equipping children with the knowledge to help the ocean and much more.