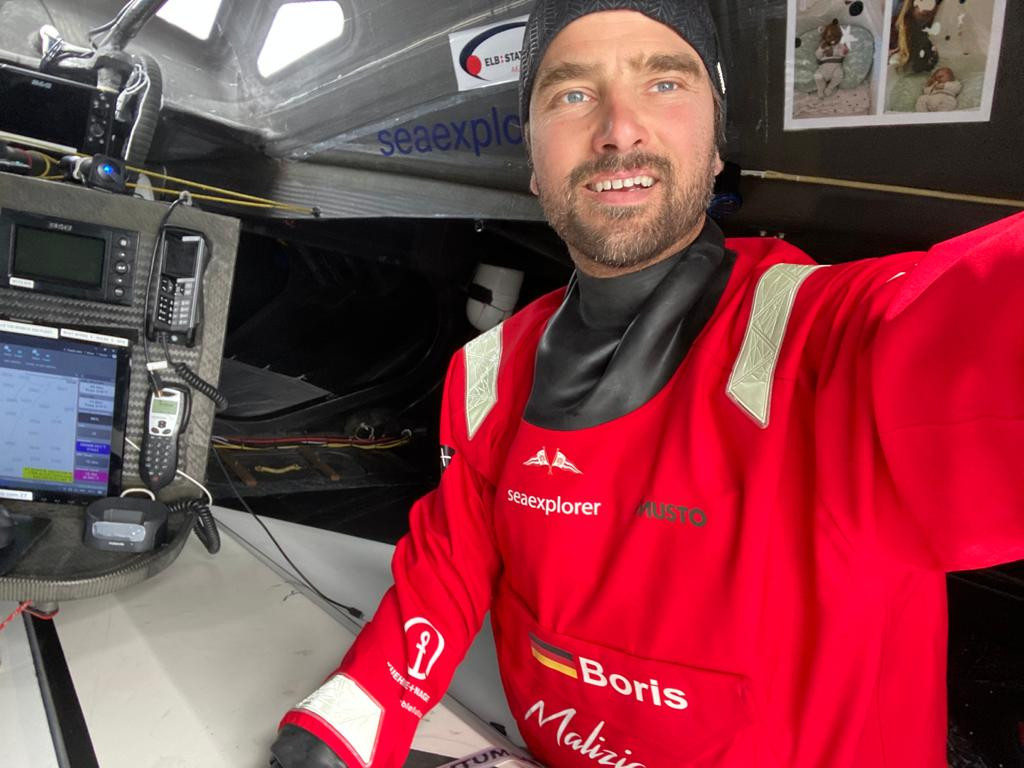 Approaching the end of the sixth day at sea in the Vendée-Arctique-Les Sables d’Olonne Race, it is all change at the top of the leaderboard with the German skipper Boris Herrmann now holding the initiative.

The race is remarkably tight with the top-13 boats now spread over only 140 nautical miles of ocean, north-south – an unheard of state of affairs in the Vendée Globe.

But this has been an unusual course for the IMOCA class with lots of upwind and light airs work and transition zones and right now Herrmann on Sea-Explorer-YC de Monaco has been the one to benefit.

He was leading Jérémie Beyou in second place on Charal by just 1.7 nautical miles with Kevin Escoffier now up to third place on PRB (+3.2). Then it is Charlie Dalin in fourth place on Apivia (+7.0), just ahead of Sam Davies in fifth position on Initiatives-Coeur (+7.9). The leader at the IOC-UNESCO Waypoint, Thomas Ruyant on LinkedOut, is now in sixth place (+16.2).

Herrmann had been in sixth place position himself at the mark, 18 miles behind the then leader Ruyant. It will be interesting to see if he can maintain his advantage because the lateral separation of the leading boats, west-east, could be more important than their north-south ranking.

This morning there was 45 miles of ocean separating PRB, the most easterly boat of the leading bunch, from Apivia on the western edge. In the next few hours the southwest and westerly breeze is going to fall away and the leaders will be back in light airs before they start to come under the influence of the next depression which is sitting in the mid-north Atlantic to the southwest of them.

Herrmann says he is still working out how to get the best out of Sea Explorer-YC de Monaco after her substantial upgrade during the winter season, which has included new foils and a new coachroof and electronics.

“I still have to learn a lot about the combination of foil rake and keel cant,” he said from in board. “It’s really these two surfaces that the boat can fly on. Sometimes you need a bit more foil rake but also more keel cant which, initially, creates more drag. But then, as soon as the boat pops up a bit, then it reduces the drag dramatically from the hull and it pays off."

The German skipper says the speed increase with the new foils can be very dramatic on certain points of sail. “I would say it is almost five knots in the most extreme case,”he explained. “It means flat water and 80 degrees to the wind and plenty of breeze – 18-20 knots. Then we are incredibly fast and much more than before.”He hasn’t had exactly those conditions since rounding the IOC-UNESCO Waypoint but the boat has certainly been flying as Herrmann has caught up his rivals in front.

For Herrmann this has race has proved its worth as a replacement for The Transat CIC and the New York-Vendée-Les Sables transatlantic. “This has been a proper warm-up for the Vendée Globe – that is absolutely true,” he said. “We had more upwind conditions in the beginning of the race but since then we have manoeuvred a lot, we have sailed in close contact with the other boats and we have been in the cold. So there are some aspects that closely resemble the Vendée Globe.

“I’m very glad that, as a team, were able to participate in this race,”he added. “It’s a good preparation I feel and I’m sorry for the teams that have had to abandone it.”

In the early stages Herrmann was finding it more difficult than usual to settle in to the offshore routine, not least because his wife had just given birth to their first child, a baby daughter. He had two days at home with his family after the birth before it was time to get back to the boat and now he is looking forward to returning home again.

“Now the race will last five more days so probably in a week I will be back home and I’m looking forward to that,” he said. In the meantime he and his wife are keeping in close touch on the satellite phone and using video conferencing too.

Out on the race course the fleet is bunched up behind Sea-Explorer-YC de Monaco. This morning the backmarker, Clement Giraud on Vers Un Monde Sans Sida still had 80 miles to go to the IOC-UNESCO Waypoint.

15.09Dalin wants to win – even the speed…Immediately after APIVIA had finished he…15.09Beyou: we can’t sail this time but …Jérémie Beyou is the defending Défi Azim…13.09Mālama and Alaka'i: a tribute to oc…Today, 11th Hour Racing Team officially …13.09Bureau Vallée tests T-rudder!Throughout the summer, Louis Burton and …10.09ALVA YACHTS is building IMOCA for t…With this new racing yacht, German skipp…03.09The Making of IMOCA 60 11.2 - Ep 2 …Dive below the surface of the colorful a…
All news and videos

Companies in Bretagne Sailing Valley®, Gearing Up for New Challenges!

From 14th to 19th September, the Défi Azimut-Lorient Agglomeration reunited IMOCA skippers come together for five days of racing; a unique opportunity to showcase Brittany’s sector of excellence in the technology of comp…

During a press conference organised by the Yacht Club Italiano on Sunday evening, the Italian Minister of Tourism, Massimo Garavaglia, gave his full support for an Italian entry in the next edition of The Ocean Race, sch…