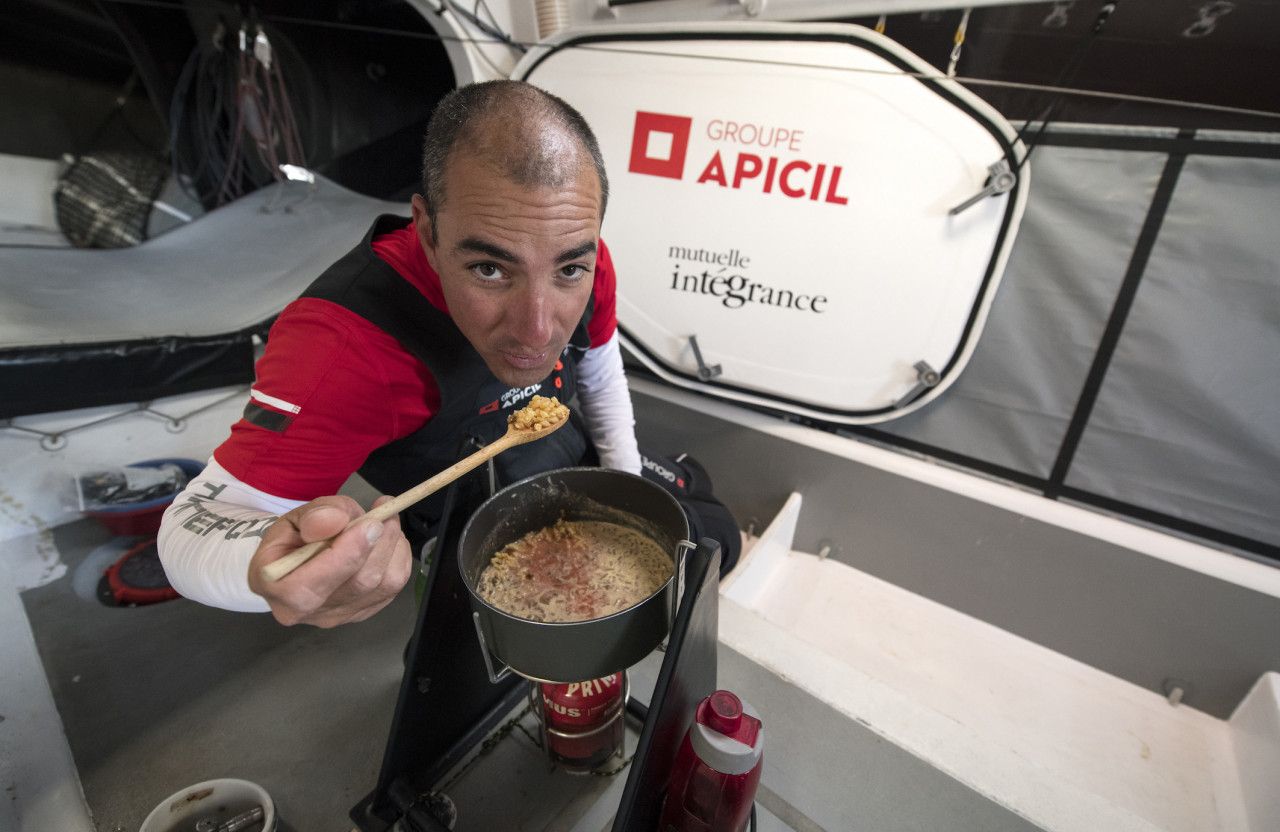 A pig, sweet treats, a Little Prince and some temples… Each sailor takes to the water with a habit, a , a ritual. We get the low-down with four days to go till the start of the Vendée – Arctique – Les Sables d’Olonne.

Custom-made: To withstand the jolting motion of his new IMOCA, the skipper of LinkedOut has a backward-facing armchair moulded to the shape of his body. All the ergonomics has been redesigned to cope with the challenge of speed.

Teatime: The Briton is one of the few people able to chat with Kojiro Shiraishi in his mother tongue – the only one perhaps? Graduating from Cambridge, where she learnt Japanese, the skipper of Campagne de France also worked in advertising in Japan. It’s not clear whether her great love of tea comes from her native England or her years on Japanese soil.

Helm temple: The Japanese skipper of DMG Mori Global One prays daily for maritime safety in his temple. In reality, he needs three temples to make his trajectory at sea safe. The first is a representation of the temple of the 9-headed dragon, in Hakone. The second is a miniature of the temple of competitiveness in Tokyo, his home city. The third is the temple of Mount Fuji and centres on the theme of health. The three create the temple of maritime safety.

Maritime egg-cellence: The Franco-German sailor of MACSF never sets sail without eggs. A fan of omelettes, she prefers to break them herself. As such, her team has created a safe place in the boat, with the boxes glued to the bilge.

No fly zone: His foiling monohull is certainly no picnic so the skipper of Newrest – Art&Fenêtres has chosen to buckle up by having a plane seatbelt installed on his bunk to prevent any inopportune take-offs.

Enough is enough: The skipper of VandB – Mayenne dreads excess baggage, admitting that he’s incapable of striking a balance with what he carries aboard, always fearful of missing out on something. As a result, he’s tasked his team with readying his bags of clothes, food provisions and spare parts carried aboard.

A taste of home: It’s a must for someone with a sweet tooth: for every race, the skipper of La Mie Câline – Artisans Artipôle, born in Talence, near Bordeaux, takes with him the Cannelés prepared by his mother, which are local French pastries with a soft custard centre. They’re said to be as tender as a heart.

Plastic not fantastic: Aboard Banque-Populaire IX, Clarisse is trying to limit the use of plastic containers. The sailor has organised her food provisions into weekly rather than her usual daily bags of provisions. It’s certainly better than nothing!

Family’s sacred: Nothing. Not a Florentine mask, not a dish of fresh pasta for the first day, not a football shirt aboard – the round of clichés is complete. Nothing, other than a cuddly toy from his kids to warm the cockles of his heart, boost spirits and give the skipper of Prysmian Group another good reason to quickly get to the finish.

Never without my piece of chocolate: The tariff, one a day. No more, but certainly no less. The skipper of Maître-CoQ is taking with him one bar of dark chocolate per day. It’s enough to make you want to stay at sea for a bit longer…

Seeing double: Clément Giraud has a partner, Monsieur Madame, but he’s racing under the colours of Pour un monde sans SIDA (For a world without AIDS), Erik Nigon’s sponsor, who won’t be competing in the Vendée - Arctique – Les Sables d’Olonne. Why not? A fire broke out on Clément Giraud’s boat in the start village of the Transat Jacques Vabre, depriving him of his steed. As such, Erik Nigon, who has already qualified for the Vendée Globe, has loaned him his boat so the skipper from southern France has a chance of taking the start on 8 November 2020.

Sports mad! The skipper of Charal is a sports fan through and through, a fact that keeps him very much in touch with land. Keen to share the results of the 23rd day of the Finnish football championship ? Don’t bother, Jérémie already knows them.

Balance: Despite the heaps of sweets, which he could eat at every mealtime if he didn’t watch out, Sébastien Simon hasn’t put on an ounce in years. Proof? The seat he uses aboard the IMOCA Arkea - Paprec has been made from the same mould as his seat in the Class Figaro.

Who’s Who?: A fan of cartoons, a wife and mother of cartoon fans, the skipper of Initiatives-Coeur has christened her foils.
Are they called:
1 – Orville and Wilbur, like Bernard and Bianca’s albatrosses?
2 - Doris and Marlin, who live in the world of Finding Nemo?
3 – Rox and Rouky, in secret homage to her sponsor in the Vendée Globe 2006-2007 ?

The correct answer is 1. It’s also the forenames of the Wright brothers, British aviation pioneers.

Fire and ice: don’t go thinking that life in Monaco is prompting the skipper of SeaExplorer – Yacht Club de Monaco to linger longingly over the gentle life on the shores of the Mediterranean. Come on though… with his swimming trunks adorned in sharks and his pet love at the finish (vanilla ice cream is a must!), the German skipper takes lounging around to a whole new level.

Rest assured: Aboard PRB, the skipper from Saint Malo is not travelling alone: he’s carrying with him his Saint Christopher, patron saint of travellers.

What can it be…: Aboard Apivia walks The Little Prince. Walk is a very big word, given the speed of today’s IMOCAs and the fact that his small stature doesn’t help him stay upright: it’s a figurine. It’s also a veiled message to the association of Les Petits Princes, which makes dreams come true for seriously ill children and adolescents. Charlie’s Petit Prince already has one victory to his credit in the Transat Jacques Vabre. It’s a great start!

Corkscrew: The skipper of Groupe Apicil is taking his toy pig with him. Mindful of keeping the weight down on his boat, he’s had to content himself with pigs on stickers this time, one on each side, and on the deck to avoid them all living on top of one another. Old habits die hard as this practice dates back to a victory in a race in Guadeloupe, won with Thibault Vauchel-Camus in the late nineties. Indeed, Damien’s dad congratulated them in his own unique way: “You’re good pigs!” in reference to the film Babe, which had just come out.

Tentacular: For at least 20 years, the skipper of Groupe Sétin has been ticking off the miles with Madeleine Sourire, the name given by his daughter Laurane to the furry octopus that has become his mascot for all his marine adventures.

The classics: Though he’s unlikely to find the time to open a book, the skipper of L’Occitane en Provence will be sure to listen to some classical music along the way. His sponsor isn’t forcing him to listen to La tristesse d’un grand ciel blanc (the sadness of a great white sky), by Olivier Messian from Provence, or La mer (the sea) by Claude Debussy. That said, the context may well lend itself to that during the Vendée – Arctique – Les Sables d’Olonne….

Island fisherman: The Swiss skipper of La Fabrique is never apart from his hei matau. His Maori pendant is made from bone or nephrite in the highly stylised form of a fish hook, with which in the Maori legend, Maui, the great mariner, fished the islands at the bottom of the sea. The hei matau represents strength, good fortune and protection on the water.