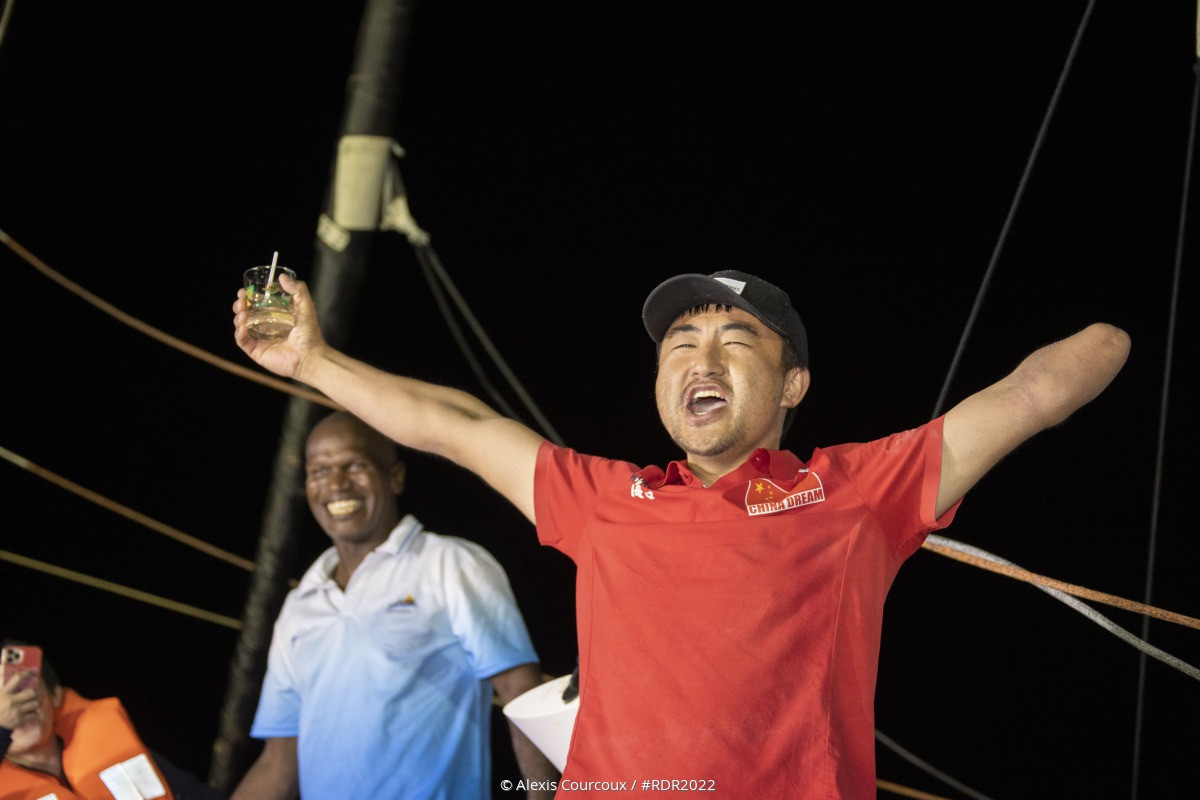 For the 33 year old sailor from Qingdao who lost part of his left arm in a fireworks accident when he was 12 his is a truly remarkable achievement. His longest previous passage on his IMOCA – formerly Alan Roura’s 2007 Finot Conq design – was the 2000 miles race qualifier before he took on this legendary 3542 miles solo ocean race from Saint Malo to Guadeloupe.

He becomes the first Chinese sailor to finish the race and qualifies himself for the Vendée Globe. Before and during the race he sought to carry the worries and problems of his countrypeople with him and disperse them on the oceans, thereby relieving them of their concerns and stresses. Along the way ‘Jackie’ has gathered 160 million followers.

Just as he came to France with little more than a backpack and a head full of ambition and went on to do complete the 2015 Mini-Transat, ‘Jackie’ returned last year with the objective of getting an IMOCA and setting out on a course he hopes will take him to the Vendée Globe. He made more friends, achieved a level of support and got hold of the boat which finished second in the 2008 Vendée Globe as Armel Le Cléach’s Brit Air, the first of five racing circumnavigations.

Jingkun Xu who has sailed the entire coast of China, has completed a three year circumnavigation and twice been China’s ‘Sailor of the Year’ lost no time in testing himself and his boat on this Route du Rhum race course, “ I have two choices south ,safe and slow or north where the bigger wind is waiting, after last day's training , I choose to move to northwest, I know if I cannot pass this,I do not have ability to join in VG, so prefer test my boat and me in RDR. Finally I succeed to pass all cold front, without any damage, acctually I feel a little proud of this, I protect my boat ,and also she saved me” He wrote at the time.

He was given a hero’s welcome with big number of Guadeloupe’s Chinese community on the dock a the Memorial ACTe.

“We finish our Route du Rhum at the first time. We said we would and we did it.” shouted the delighted skipper to the cheering crowd. I knew I had to take care of the boat. We did not damage anything, we keep the boat in good shape for the future, for the Vendée Globe. This is a big moment for me. The most difficult thing for me is that on the IMOCA everything is very heavy. I used all the sails and changed them and it is very difficult as I have only one hand. And so everything is very heavy. Everyday I was wet through, sometimes with sweat because you work so hard all the time. But it is worth it. The Vendée Globe is my dream. I wanted the Route du Rhum to be a good training for the Vendée Globe. The first week was so hard, always low pressures, big winds, upwind. The second week was so good. I really enjoyed it in the trade winds. I shared a lot of videos about life on the boat for Chinese children. Now they are learning about the Atlantic and sailing. I very much enjoy that. I am so excited there are so many people following us in China. They did not know about the Route du Rhum before, nobody knew what an IMOCA is, nobody knew sailing, and so now we are trying to change that. We hope that they will see sailing and it will make the children strong. Tonight I want to have a good sleep, a good meal and then get back to work. This is just the beginning. We need to prepare the boat, learn more things. Now we want to get better and better.”