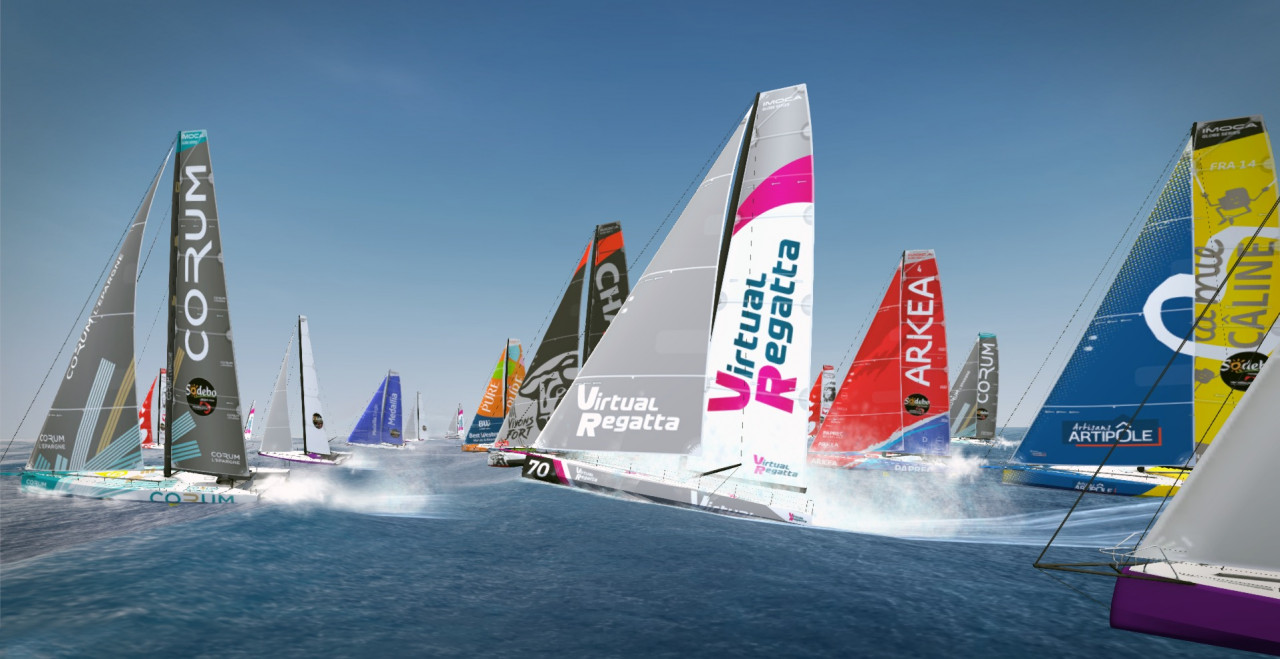 With the IMOCA GLOBE SERIES due to resume on 8th May with the start of the Guyader Bermudes 1000 Race in Brest, Virtual Regatta is launching the world’s first Virtual Championship dedicated to offshore racing and IMOCA boats in particular: the IMOCA VIRTUAL SERIES by CORUM L’Épargne.

This series of virtual events will enable players to battle in the same races as the real skippers. Good news is, the global leader of e-Sailing also plans to create around ten virtual races before the Vendée Globe 2024. The perfect opportunity for IMOCA to crown one real Champion and one virtual Champion every year!

Two universes, one shared history and the same amplification. IMOCA and Virtual Regatta, whose destinies are closely entwined, have reaped the benefits of the incredibly popular appeal of the last Vendée Globe. Indeed, some twelve years since its creation, Virtual Regatta amassed over 1,100,000 players during the round the world race. With regards to the IMOCA teams and the various partners involved, never before have there been such generous audiences and coverage!

Inaugurated in 2018, the IMOCA GLOBE SERIES stems from a desire on the part of the skippers and race organisers to create an increasingly strong link between the different events. To add to the growing appeal of the famous 60-foot monohull Class, this Championship now groups together the major offshore races, with more and more events focused solely on IMOCA.

By fleshing out the event schedule – four races on the 2022 programme, and 18 in all between 2021 and 2024 –, the IMOCA GLOBE SERIES enables the teams to improve their reliability and performance, whilst competing together on a more frequent basis. Meantime, the public also get treated to an epic serial they can avidly follow from one Vendée Globe to the next! At the end of each season, the IMOCA champion title is awarded to the skipper who has posted the year’s most consistent performance.

The IMOCA VIRTUAL SERIES, the same emotions in virtual format

In conjunction with this unique circuit, Virtual Regatta is breaking new ground by offering the IMOCA VIRTUAL SERIES, the first virtual Championship of this type. In addition to the real events available in a virtual format, Virtual Regatta will complement the programme with around ten 100% virtual races specially created for the occasion.

Like a real skipper, every virtual skipper will amass points throughout the season in their bid for the annual title. It’s also a way of reinforcing the link with IMOCA as those who perform best will win prizes, including the opportunity for the champion to sail aboard a real-life IMOCA: CORUM L’Épargne, skippered by Nicolas Troussel.

CORUM L’Épargne offers a meaningful savings plan, which is accessible, transparent and associated with the real economy. Sharing these values of transparency, commitment and risk management with the sport of sailing, CORUM L’Épargne got involved in the offshore racing domain in 2018, alongside skipper Nicolas Troussel. Since 2022, the sailing team has been a valued part of the Group, showcasing the company’s unique and long-term development plan. In May 2020, the move-and-shaker in the savings domain, launched a latest generation IMOCA in its colours with the aim of taking the start of the Vendée Globe. Driven by a common desire to make offshore racing accessible to the widest possible audience, it was during this singlehanded round the world race that Virtual Regatta penned the opening chapter about its own virtual links with the event. Two years on, CORUM L’ Épargne has naturally rallied together as one of the key protagonists of this new IMOCA VIRTUAL SERIES Championship. As title partner and keen to be part of the movement to champion innovation, the company is supporting the launch and development of this global first. Furthermore, CORUM L’Épargne will be delighted to welcome the winner of the overall ranking into its midst for an immersive day-long experience both on and off the water.

“Over the years, we’ve witnessed the extent to which Virtual Regatta has managed to gather together an increasingly large community keen to take on identical challenges to those undertaken by the IMOCA skippers. Their passion and their commitment are crucial factors in the popularity of our races. In conjunction with the continuing development and influence of the IMOCA GLOBE SERIES, the creation of the IMOCA VIRTUAL SERIES is a wonderful opportunity to help build this community loyalty and enjoy great sporting moments together. Similarly, it highlights the importance of our championship and its influence, both in the real and virtual world. I’d like to take this opportunity to extend my heartfelt thanks to Virtual Regatta and CORUM L’Épargne for their trust and commitment alongside us.”

“We’re delighted to be working with IMOCA and CORUM L’Épargne in the creation of the IMOCA VIRTUAL SERIES. To be able to continue breaking new ground and offering our community a challenge of this scale, which is so similar to those of the IMOCA skippers, is testament to the passion that drives us on a daily basis, as well as the very strong links that bind the real and the virtual sailing world. My thanks to IMOCA and CORUM L’Épargne for their trust and for this quite unique collaboration.”

“There are precious few projects, which reconcile all the values we’ve been advocating at CORUM L’Épargne for more than ten years to this extent. Breaking new ground, making things accessible and committing ourselves: this is what inspires us every day and is part of our DNA, as we’ve often demonstrated. This joint challenge with Virtual Regatta and IMOCA is a truly unique opportunity to attest to our boldness, our desire for openness and our long-term involvement. Nothing could be more motivating for us than being a part of this adventure and sharing our passion for sailing with a whole community of players!”

Since its creation in 2006, the Virtual Regatta games have proven to be a real hit. They enable one and all to compete against racers from the physical world, as well as enthusiasts the world over. Virtual Regatta is currently the exclusive partner of World Sailing, co-organiser of the ‘eSailing World Championship’ and the ‘Nations Cup’ on Virtual Regatta Inshore. Virtual Regatta is also the sole official game for all the world’s most prestigious races, including the Vendée Globe. The game is free of charge and available to play on computers, smartphones and tablets. Boasting a community of over 1-million active players, Virtual Regatta is the biggest nautical community in the world!

Founded in 1991 and recognised by World Sailing since 1998, the International Monohull Open Class Association manages the Open 60-foot (18.28 metres) monohull class. IMOCA, which sets out the rules guaranteeing sporting equity by developing the craft’s innovation and safety criteria, aims to develop its fleet of monohulls and offer its skippers an attractive and coherent sports programme. It works towards the internationalisation of offshore racing whilst combining the notions of competition, innovation, human adventure and safety in an environment geared towards the development of more sustainable performance.

How does it work?

At every event, each skipper will score a certain number of points according to their ranking, the number of participants and a race-specific coefficient.

The skipper(s) who score(s) the most points over the course of the season win(s) the title.
IMOCA GLOBE SERIES ranking for all the events, click here

The IMOCA GLOBE SERIES also enables the sailors to gain selection for the Vendée Globe 2024 through singlehanded qualifying races and a tally of the number of miles sailed by each sailor during official events.