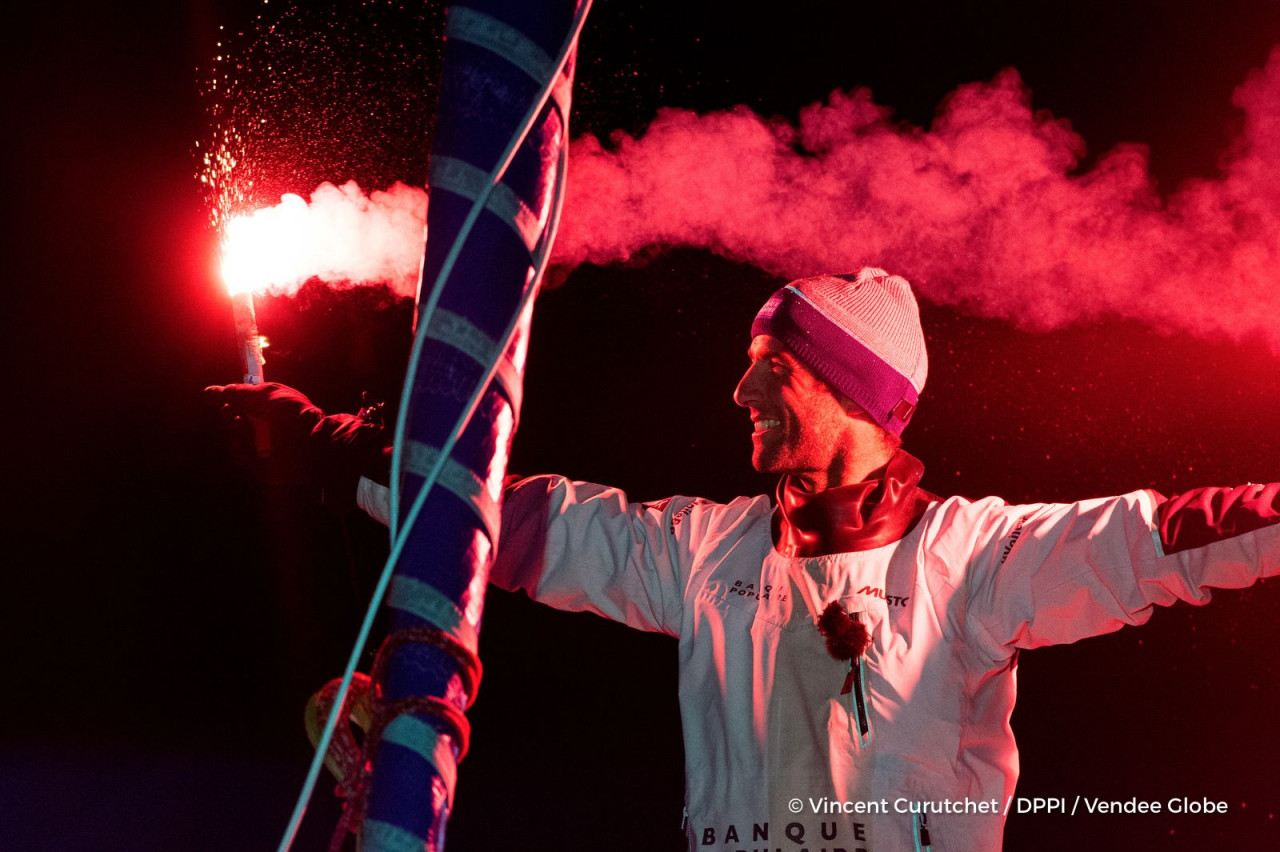 French sailor Armel Le Cléac'h today won the Vendée Globe in one of the most thrilling finishes the solo round the world race has ever seen.

French sailor Armel Le Cléac'h today won the Vendée Globe in one of the most thrilling finishes the solo round the world race has ever seen. After 74 days and almost 24,500 nautical miles of first-class ocean racing Le Cléac'h was finally crowned victor in the long-running battle with British skipper Alex Thomson for the top spot in the solo round the world race, regarded as one of the toughest sporting challenges known to man.

Le Cléac'h, 39, from Brittany, sealed the win – and a place in the Vendée Globe history books – crossing the finish line at 1537 UTC to complete the course in 74 days, three hours and 35 minutes. His time sets a new record for the race, beating the previous record of 78 days 2 hours 16 minutes set by French sailor François Gabart in the 2012-13 edition by three days, 22 hours and 41 minutes.

Dozens of spectator boats took to the water to welcome their new hero back to the French port of Les Sables d'Olonne, from where the race started on November 6 last year. With his shore crew taking control of his 60ft IMOCA race boat Banque Populaire VIII, a tearful Le Cléac'h was left to enjoy an emotional reunion with his son Edgar, 6, and daughter Louise, 9. Thousands more fans lined the walls of the town's famous harbour entrance as Le Cléac'h arrived dockside at Port Olona to a fanfare of fireworks.

Le Cléac'h, runner-up in the last two editions of the Vendée Globe, said he had now fulfilled a lifelong dream. “This is a dream come true,” he said. “I hoped to win this race 10 years ago but I finished second. Today is a perfect day. I understand that today I have done something big. My team have been amazing they're the dream team, and this is their day too.” Le Cléac'h also paid tribute to Thomson for his skill and tenacity in pushing him right to the finish line. “It has been very difficult with Alex behind me, he gave me a really hard time in this Vendée Globe,” he added. “Each time things went his way and I got nothing. It was stressful because he kept catching me. With a lead of 800 miles off Cape Horn, I didn’t think I’d be facing such pressure. I'm very happy for Alex, it is a great second place.”

Le Cléac'h took the lead within 24 hours of the race start but had lost it to Thomson by the time the skippers, both racing on new-generation foiling IMOCA 60s, reached the Equator. After catching Thomson in the Southern Ocean the pair traded places on numerous occasions before Le Cléac'h established a solid lead on December 3. From that point on he refused to relinquish his grip on first place despite a sensational effort from Thomson to reduce an 819nm deficit at Cape Horn to just 50 miles at the Equator. Even when Thomson surged to within 30 miles of Le Cléac'h with a few hundred miles to go the French sailor held strong, defending his position until victory was all but guaranteed.

Le Cléac'h averaged an incredible 15.43 knots of boat speed over the 27,455 miles he actually sailed, on occasion hitting speeds in excess of 30 knots. His best 24-hour run came on January 16 when Banque Populaire covered 524.11nm averaging 21.8 knots, surpassed only by Thomson who on the same day sailed 536.81nm averaging 22.4 knots, breaking François Gabart's existing record by two miles. Le Cléac'h held the top spot for 56 of his 74 days at sea, and between him and Thomson they broke every single one of the existing race records.

Thomson is expected to cross the line early tomorrow morning and will enter the harbour after 0800hrs UTC.

“In the Pacific, I felt good with the weather that I was getting. A halyard hook broke and that stopped me from using one sail in the Pacific. I was a bit afraid after that that the others would break too. I thought I’d made my getaway at Cape Horn, but everything was against me, the high in the South Atlantic, which blocked my path, then the Doldrums, which weren’t kind to me, followed by the transition zone around the low off the Canaries. It was a bit of a mess. Each time things went his way and I got nothing.”

“I’m pleased to win the Vendée Globe. From start to finish it was a fight particularly against Alex Thomson. These past few weeks have been stressful with lots of things going on. Now I’m just so pleased. It was incredible to see all the boats that came out to greet me. Even this morning they were there off the coast. I’m proud to be the first back to Les Sables d’Olonne. I kept believing it was possible in the North Atlantic. I got messages of support and that kept me pushing. I have really been pushing hard. If I look fine now, it’s because I’m happy to have won, but it’s been tiring. There were times when I felt everything was going against me, so it was highly emotional even before I crossed the line. When the wind disappeared I tried to find something to help me. Something lucky. I prayed to the wind gods and that’s when I shaved off my beard. It was when I tacked off the Scillies that I finally was able to enjoy myself. I haven’t had too much work to do and would like to thank my team. It’s down to them that this boat performed so well. That’s three Vendée Globes in a row for me. The dream has come true, so now I’m moving on to something else. I’m pleased to be back with others and to be getting a good meal. It’s a huge change for me.”