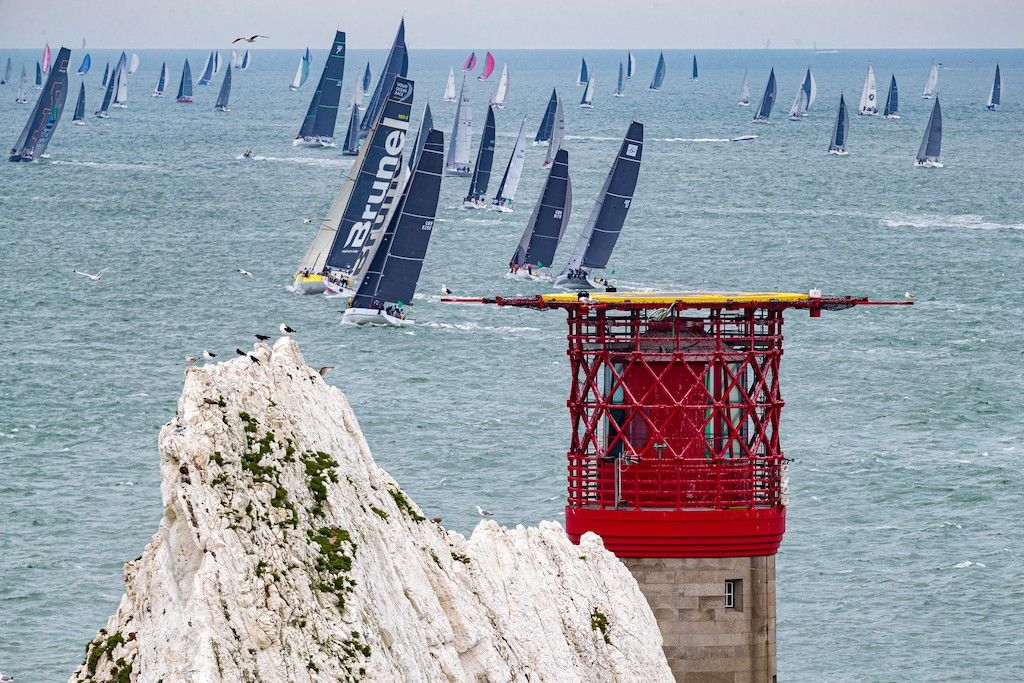 More than 350 boats in total will set off from Cowes (Isle of Wight) on this 49th edition of the most legendary of British sailing events. From the largest yachts, such as the brand new Swan 125 Skorpios (Juan K design), to the smallest family yachts, the Rolex Fastnet Race is a grand dame that is as popular as ever; and despite a complicated sanitary context, 2,300 sailors are today setting out to conquer the Fastnet Rock.

Six months after the Vendée Globe, the IMOCA skippers who did not race in The Ocean Race Europe in June are back in the competition today. Only the duo of Justine Mettraux and Simon Fisher (11th Hour Racing) are at the start of these two early season races and have the most miles together this year.

Other favourites include 2019 winners Jérémie Beyou and Christopher Pratt (Charal), but also the combination of two formidable Figaro sailors on board ARKEA PAPREC: Sébastien Simon and Yann Eliès. Sébastien was forced to retire two years ago with Vincent Riou. The red and blue monohull had just come out of the yard and had experienced some technical problems.

Another tandem to watch is APIVIA with Charlie Dalin (2nd in the Vendée Globe) and Paul Meilhat (winner of the Route du Rhum and also the Fastnet as skipper of SMA). There is no doubt that with their skills and a dense training programme over the last few months, these two are aiming for victory.

Yannick Bestaven, the winner of the Vendée Globe is also making his return to the water with Maître CoQ IV, a boat of an older generation but one that his skipper knows perfectly. This is also the case for his team-mate, Roland Jourdain, who has already shared the 2019 Transat Jacques Vabre on board with Yannick. Romain Attanasio and Sébastien Marsset's Fortinet-Best Western and Samantha Davies and Nicolas Lunven's Initiatives-Cœur are from the same generation and also have a few trump cards to play.

And of course, don't forget the return of HUGO BOSS. The British sailor Alex Thomson, at the helm of a boat with unique lines, will be keen to write a new page after his retirement from the Vendée Globe in the South Atlantic after a thunderous start to the race.

But sailing is still sailing and the weather will be a central element in the story, with the end of the course taking the fleet for the first time to Cherbourg and its famous currents. With a zone of light, or even very light, winds forecast at the beginning of the week and high tides.... anything can happen.

The first warning signal is at 1100 (first start 1110) and the fleet is divided into seven groups, each starting at a different time and heading west down the Solent toward the Needles.

The live streamed Start Show, with commentary from on and off the water, begins at 1030 BST. Expert commentators: Pip Hare, Abby Ehler, Matt Sheahan, Louay Habib and Simon Vigar, will be talking us through all the action from the start of the world's biggest offshore yacht race, with analysis and interviews from competitors and organisers in build-up to the race.

WHERE TO WATCH
The best vantage points of the start will be along Cowes Green and Egypt Esplanade. As the fleet funnels west out of the Solent there will be lots of chances to see the yachts from Yarmouth as well. From the mainland you can view the yachts on their outbound leg; the best places to watch are from Hurst Castle, Anvil Point, St Alban’s Head and Portland Bill.

LISTEN
Listen to the commentary of the race on 87.9FM or online at: https://www.coweslive.co.uk/ or through the speakers if you are sitting watching the spectacle from Princes Green or on The Parade in Cowes.

TRACK
All yachts are fitted with a YB Tracker so you can follow an individual boat, a class or the whole fleet. The race tracker will be up on the official site closer to start day: https://www.rolexfastnetrace.com/

If you aren't on a boat in the race this year, then join thousands of armchair sailors from the comfort of your own home. The player will be on the race website: https://www.rolexfastnetrace.com/en/follow and at: https://www.virtualregatta.com/en/