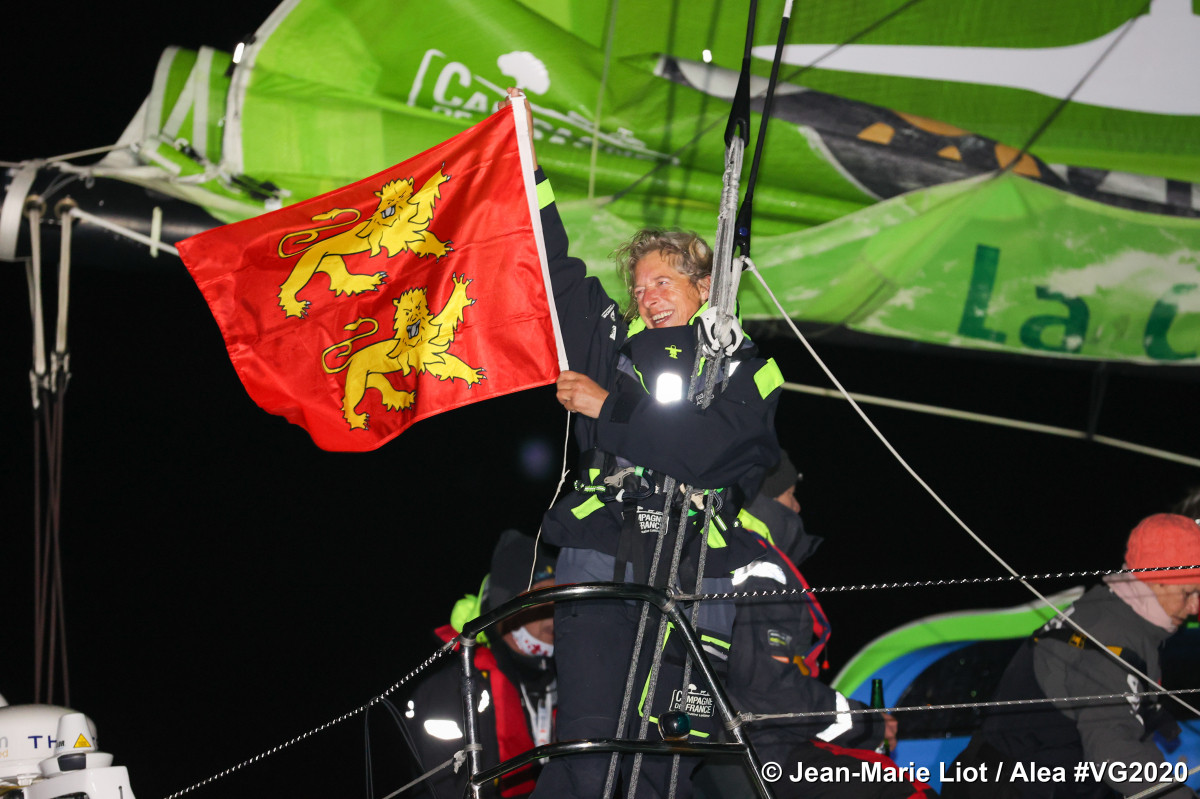 Merron becomes only the ninth female skipper to have finished the race since it first started in 1989 and as of this evening five of them are British, Ellen MacArthur, Sam Davies, Dee Caffari, Pip Hare, who finished 19th on this race on the 12th February.  Her 101 days time is sixth fastest, two days behind the 99 days 1hr of Dee Caffari in 2008-9.

Her result is highly commendable and fulfils the simple target she set herself, to finish the course bringing her boat and herself back to Les Sables d’Olonne in good shape, having fully embraced and enjoyed all of the challenges that came her way on a race she considered she was peaking for at ‘just the right time for me’,  51 years old.

Backed by a leading French dairy and farming cooperative, Merron achieved her Vendée Globe success on a modest budget thanks to a carefully executed preparation period working long days and evenings alongside her hugely experienced life partner Halvard Mabire with only occasional outside help.

Largely unflappable on the water thanks to her tens of thousands of ocean racing miles and her naturally calm demeanour, Merron has cherished each day, and although she missed her nearest and dearest, she proved a sailor well able to race her optimal route and press hard enough to make good average speeds for her reliable, solid, boat without putting herself or her boat in excess danger.

Her elapsed time places her between that of Swiss skipper Dominique Wavre who finished seventh in 2012-13 at 90 days when this Owen Clarke design was newer and the 107 days of Rich Wilson on the last edition when the boat was Great American IV.

The Vendée Globe is very much the peak of her ocean racing life, a professional career which really started in 1998 when she was part of Tracy Edwards 1998 crew to take on the Trophée Jules Verne record – alongside a young Sam Davies – intensifying in 1999 when she won the 50 foot class of the Transat Jacques Vabre with Emma Richards.

Back then the Cambridge educated Merron, was just ‘taking a short break’ from a flourishing career in advertising, working in Tokyo, Paris and Sydney. But she has never looked back since then and her own pride today is magnified by that of many of the sailors – both female and male – who she has sailed with over her 25 year career.

Starting out crewing for her father in an International 14 at the age of nine, by 1979 she had already completed her first Transatlantic, west to east as her family returned from Canada to the UK for her father to take up a new job,  At Cambridge she was a contemporary of Volvo Ocean Race winning skipper and double Olympic silver medallist Ian Walker, who reminded her during her Vendée Globe

“Who would have ever thought we would both have gone on to race round the world. We used to spend hours practising gybing in strong winds, I think we called it gybe ‘til you die!”Walker chuckled…

Since then Merron has raced the Route du Rhum with a career best sixth in Class 40 in 2014, the Transat Québec St Malo and the Volvo Ocean Race as navigator on Amer Sports TOO. She won the Transat Jacques Vabre, Quebec - Saint Malo and the RORC Transatlantic. As part of an all female crew of Aviva in 2009 they set a new record around the British Isles.

Her race saw her deal with several technical issues without drama or artifice, deliciously ‘old school’ in that more often than not she alerted the outside world to her problems only once they had been solved, usually fixed in consultation with Mabire. Among the key problems were the gennaker hook which was stuck soon after the start, leakages in the keel hydraulic systems which was contained in the engine compartment, hydrogenerator failures in the south and pilot issues, in particular after Cape Horn.

She suffered a full doldrums experience and was never really gifted particularly beneficial weather systems, enduring one big storm in both the Indian and the Pacific. If her descent of the north Atlantic found her struggling to find her best rhythm with her boat, in the south she was very solid and a difficult ascent back up the Atlantic was well executed.

Every day, without fail she told the stories of her race, often with a beautiful economy of language. A few well chosen words were enough to round up her thoughts and the happenings over the last 24 hours since her last missive. And though she clearly enjoyed the quiet solitude, the harmonious relationship between her and her boat, equally she profited from exchanges with all of her many friends and supporters from all corners of the sailing world, not least a virtual drink each Friday at ‘beer o’clock’ with her chum Sam Davies. Over 101 days she says she certainly preferred to listen to her boat than any music. And while she maintains the big south is not at all a place for human beings to be in, again she marvelled at it and wrote of the magnificent seabirds,  sunrises and sunsets, the different hues of grey and the clammy cold.

“Pretty glamourous conditions for the last 24 hours, sailing east towards Cape Horn, stable wind direction and not too much sea. I am really anxious that something will go amiss, with just 367 miles of Pacific Ocean in front of Campagne de France's bow. Countless sailors have had their dreams dashed in this ocean, including ours on our Jules Verne record attempt on Royal SunAlliance in 1998. Yesterday, Sam Davies wrote a beautiful homage to our mast, which is resting in peace in the depths about as far from land as it is possible to get, and to the extraordinary adventure led by Tracy Edwards. It had a major influence on my subsequent choice of career.  A big thank you to Sharon Ferris (former fellow team mate on Royal SunAlliance) for the running commentary all night (via whatsapp) on the Prada Cup!”

And some 23 years later, Tracy Edwards last night expressed the feelings of so many of Merron's legions of friends and peers

‘"You are my absolute hero.”