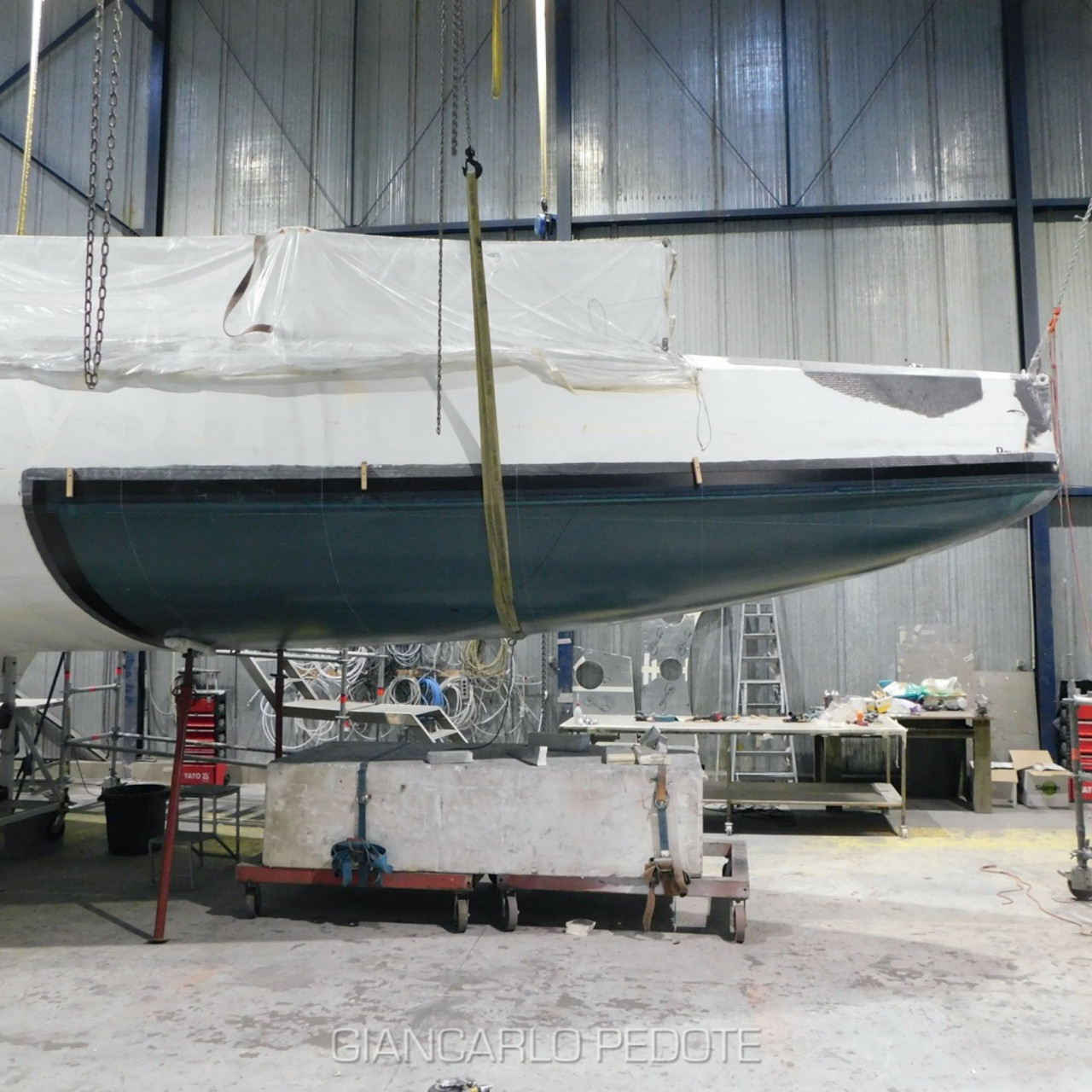 Kitted out with a new bow, a reinforced structure (prior to the arrival of her new foils) and a new livery, Prysmian Group – the only IMOCA to fly the Italian flag – will return to the liquid element on 27 April 2022 after a 4-month refit.

As announced by Giancarlo Pedote on his return from the last Vendée Globe (the skipper of the 60-foot Prysmian Group finished 8th), the winter refit would be a chance to enhance the bow shape on his boat, which though reliable, had encountered some difficulties cutting through the waves, a phenomenon often suffered when offshore racing.

For nearly a year, the skipper has been working with the boat’s naval architects to come up with the best possible bow shape for Prysmian Group, one which would enable her to cleave through the waves at top speed. “With my main sponsor, Prysmian Group, the idea is to up the ante on the leader board in the next Vendée Globe 2024. Consequently, we’ve decided to invest in a series of structural changes. Even though the photos of the plumes of water up forward and the torrents of water crashing around the cockpit were fabulous, the boat’s speed took a hit from all of that!”

“During the refit, we made another major modification, which will enable the IMOCA to be furnished with some new foils in 2023. We have also reinforced the hull bottom with harder materials, capable of withstanding the significant impact and pressure we’ll have to contend with once the new foils are fitted.”

The new loads are one of the fundamental challenges in terms of the boat’s reliability. As a result, and with a view to ensuring continuous surveillance of this variable, Prysmian Group’s rig has been equipped with various sensors, which will enable Giancarlo Pedote to constantly monitor the watertightness of the equipment whilst sailing.

In honour of Italy

The launch of Prysmian Group will be an opportunity to celebrate the end of this latest refit as well as present the boat’s new Italian livery, in honour of the much-cherished motherland of the Florentine skipper!

“The image I most treasure from my arrival at the end of the last Vendée Globe was the one where I was clasping the flag”,admits the Italian. “That moment will remain etched in my memory forever. It was as if I was embracing my country, which I’m such a long way from, but it is always close to my heart. I was born in the country which, to my mind, is the most beautiful country in all the world, in a city with myriad details. It’s those details which make all the difference and I believe that these are what form the basis of Made in Italy excellence. In my manner, my way of living and working, I’m totally Made in Italy and I wanted the whole world to know that!”

The enthusiasm and the excellence conveyed by Giancarlo Pedote are those echoed by his main sponsor, Prysmian Group, a multinational with an Italian heart, it too representing excellence in the cable and wiring sector.

Armed with her new improvements and sporting her novel livery with pride, Giancarlo Pedote’s IMOCA is now ready to welcome a potential new partner for the next Vendée Globe, alongside her historic sponsor, Prysmian Group. Together they’ll be competing in all this season’s races, which make up the IMOCA Globe Series circuit :