Paul Meilhat looks back at the IMOCA contest 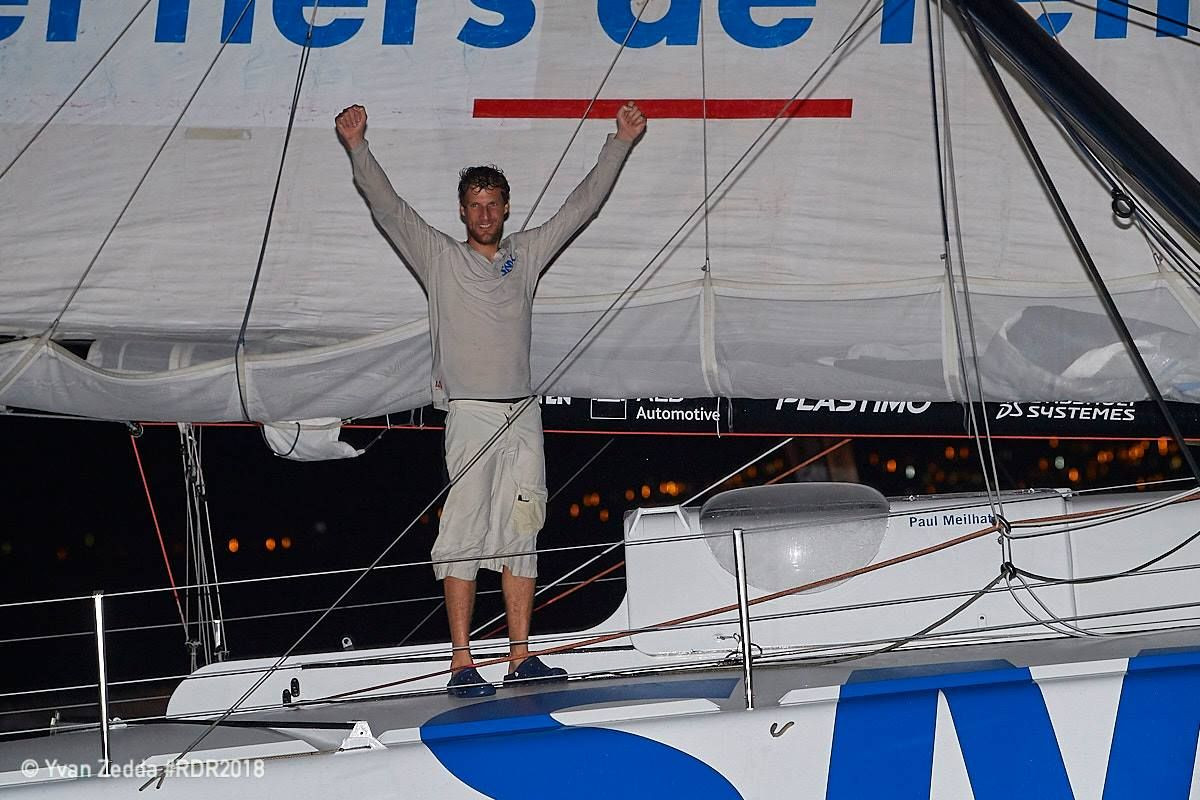 At the end of a breathtaking Route du Rhum which was full of twists and turns, Paul Meilhat achieved his first major solo victory. After a short rest, he analysed the race, before talking about his future prospects in the IMOCA class...

At the end of a breathtaking Route du Rhum which was full of twists and turns, Paul Meilhat achieved his first major solo victory. After a short rest, he analysed his race for us commenting on the performance of his rivals, before talking about his future prospects in the IMOCA class.

“Paul felt completely at one with his boat,” said Gwénolé Gahinet in his article on the IMOCA class. Can you confirm that?
“Yes. I have sailed a lot on SMA, the equivalent of sailing around the world twice. She’s a boat that I can listen to, which is just as well, as she is very delicate in terms of her set-up. You just have to deal with the twists in the sail and she will accelerate straightaway. I was out of action for three months before the Route du Rhum, because of an injury, but when I stepped aboard, it all come back to me immediately. Everything I learnt sailing double-handed, I managed to carry out sailing solo and soon, it all came naturally to me. Sometimes I even surprised myself. At the end of the Route du Rhum, I was so at one with the boat that I was able to carry out the gybes at night without a headlamp with the impression that the lines automatically fed back to my hand.
I am really confident in this IMOCA and in my capacity to carry out manoeuvres in tough conditions. When there were 45 knot winds in the Rhum, I managed to sleep without any problem. The risk of damage never entered my mind. And in the end, I didn’t suffer any major damage, just a few little things as in every race.”

Let’s look back at your race. The first hours were key…

“Yes, indeed. From the first night, we had to get through an extremely complicated low-pressure system. Before the start, we may have underestimated it. With Vincent Riou we did well in that phase. We stayed on the starboard tack and were a bit lucky, as we were the first to get the new wind, which enabled us to get a long way ahead of Yann Eliès in particular. At the same time, Alex Thomson took an option out to the west, which was very interesting, but not at all suited to my boat’s polars.”

It was then a question of speed racing against Vincent Riou to the latitude of Madeira. Were you surprised he didn’t get ahead with his foiler?

“Yes. In those points of sail his boat was favoured, but we stayed at more or less the same speed overtaking each other again and again. In the beginning, I thought he was taking it calmly with his foils, as the seas were heavy. After passing through the second low, Vincent continued to sail at speeds which weren’t that high. I thought he must have had a technical problem, without knowing it was his wind instruments. Just before Madeira, we had to deal with a ridge of high pressure before picking up the trade winds. I was one of the first to run into that. Yann was catching up quickly and Alex was ahead.”

“We played around with fire”

“Yes, it was the start of the second part of the race. I was up with the frontrunners, but I thought that it would be tricky for me to keep up the pace, if the trade winds were strong. We ended up with twenty knots and a huge northerly swell making it complicated to sail under spinnaker. Alex was beyond reach, as this point of sail was extremely favourable for him. In general, he was 15 % quicker than me in VMG downwind. I knew however that the difference in speed with Yann was not so great and Vincent was not up to 100% because of his technical problems.
Yann moved off to the south. For me, it was more interesting to stay on the inside around the curve of the high. I decided to sail lower as my boat requested, while taking advantage of the wind shifts. Each day, Vincent and Yann got that bit closer, but sometimes they lost ground too. What scared me was finding myself too far off and having to tack back up. If we sail at 140 degrees to the wind, I know that the foilers perform better. In the end we stayed on VMG until the end, which really helped me out.”

Alex was a long way ahead, so were you aiming for second place?

“Yes! Already when I saw that there were four of us fighting it out in the trade winds, my goal was to make it to the podium. At the end of the race, Alex was on his way to victory and I could see Vincent giving up. He revealed his wind instrument problems. He seemed extremely tire and needed to sleep, so was not as fast. It was getting very complicated for him. That was when I thought I could get second place, even if Yann was piling on the pressure. I knew that the race around the island could decide everything, so I told myself I had to give it my all, believing that a few hundred yards gained here could be very useful in the end.”

How did you find out about what happened toAlex Thomson and what was your reaction?

“I could see early on that there was a problem, as I looked at the positions of my rivals every hour on the tracker. I could see from his track that he had run into Guadeloupe, and then set off again. I must say that I think it is a pity that the rankings were updated every hour in the Route du Rhum. It may not seem that important, but that removes a lot of the strategy, as we want to keep the others in check. I think it would be good to return to rankings being issued every four hours.

When Alex hit the cliff, that changed everything. I didn’t look at the list of penalties, but I imagined that the Jury couldn’t let Alex win the race after using his engine. In my mind, it was clear. With Yann, we were now fighting for victory. That added a lot of stress. Alex’s bad luck calmed us down a bit. We realised we had been pushing too hard and had been playing with fire.”

With Yann Eliès just behind you, it wasn’t a comfortable position to be in when sailing around Guadeloupe…

“That’s true. If there is one person capable of piling on the pressure it’s Yann Eliès. I knew that he wouldn’t give an inch away. He never sets off intending to finish second in a race. This final part of the course was very physical and stressful with a lot of manoeuvres and strategic choices to make. Fortunately we arrived at a good time and the wind was blowing. I got slowed down downwind of the island, but Yann was too. I remained concentrated and kept calm trying not to make any mistakes.”

How do you feel about winning the race after a jury decision?

“On the last tack, I knew that the race was won. The tension dropped. I picked up the phone and had a look at what people were saying on social networks to know how to react at the finish. I saw that Alex had made some extraordinary declarations and was brilliant. He shut down the arguments immediately. I was reassured about what would happen at the finish. In any case, I wasn’t going to boast about this. That’s not my style.”

Have you spoken to Alex since the finish?

“He didn’t want to come to the finish, which was the right decision. The third placed skipper welcoming home the winner didn’t make any sense. Since then, we have talked a lot, yes. He has said to me several times that this was the biggest foul-up in his life and that he didn’t deserve to win the race after such a mistake.”

“It’s great seeing people give so much”

You all finished in Guadeloupe completely worn out. There were even a few tears on Vincent Riou’s face…

“We took it a long way. The start of the race was complicated. It is rare to find four boats so close together in the trade winds. There was no time to rest. We were all well prepared. We are all able to take it a long way into the tiredness, as we let things come naturally. Considering the quality of my opponents, I knew that I would have to give it my all to be in with a chance of winning. It was like in Figaro mode. It’s great seeing people give so much. Boris also had a fantastic Route du Rhum on what was his first major solo race. He clocked up a few points in his head for the Vendée Globe.”

Did you follow what happened to those further back?

“Yes, I closely watched the incredible battle between three competitors, Damien Seguin, Alan Roura and Stéphane Le Diraison. They are three really nice guys that I love. I was pleased to be there for their finish. They have similar projects in terms of their boats and budgets. They fought with the arms at their disposal with the same energy as us. I could see too that some competitors really suffered and had to carry out pit stops. All of those who could set off again, even if they knew they had no chance in the race. It’s a fine lesson, which highlights the quality of the sailors. I was sad to see Sam Davies retire as she should have been up with us at the front.”

Your partnership with SMA is coming to an end, so you are looking for new partners to launch an IMOCA project. What can you offer potential sponsors?

“I am proposing two things, starting with the construction of a brand new IMOCA. In my opinion, with two years to go to the Vendée Globe, we still have time. I have done a lot of sailing and gained a lot of experience of IMOCAs and above all I have a technical team in place who are highly skilled. We can once again do something extraordinary. The other idea is to keep the present boat and modify her, in particular adding foils. We know that we have to go down that road and we know too that it works. But we’re taking one step at a time, and firstly, we need to find the funding.”