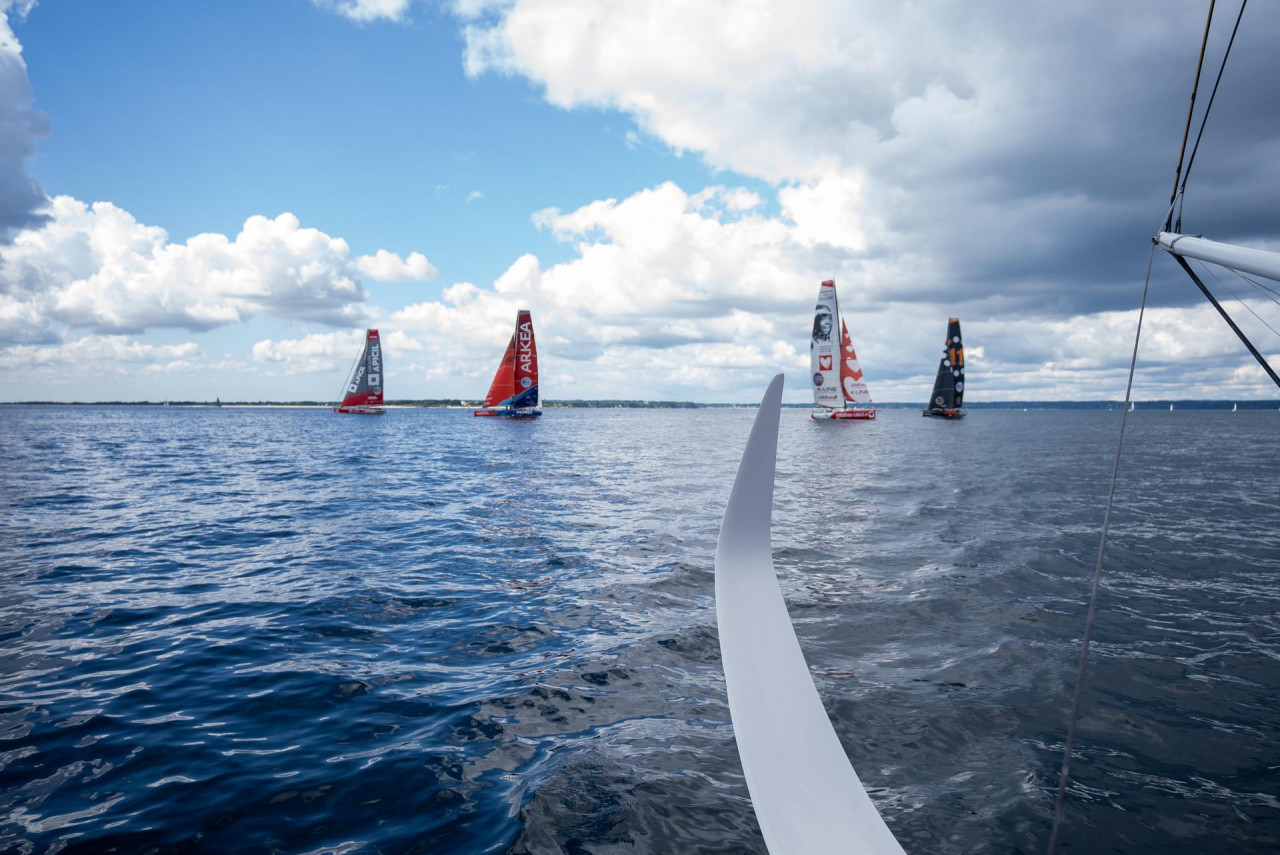 In the meantime though, some of the teams have set up their secondary headquarters in France, in Cherbourg-en-Cotentin, which for the first time in the race’s nearly 100-year history, will host the finish. With Charal and Maître CoQ IV in port and ARKEA PAPREC, Groupe APICIL, Initiatives-Cœur, Fortinet-Best Western, #TheMountainMan and 11th Hour Racing at anchor, the skippers and their shore teams are honing their weapons in readiness for the windy conditions forecast for the first day…

True to form, the start of the Rolex Fastnet Race is set to involve a bracing beat to windward in a 20-knot WSW’ly wind to exit the Solent, increasing to 30 for the first few hours of racing. With a fleet of over 350 boats and 2,300 sailors at the start, things are going to get rather lively! “With our boat, it’s not always that pleasant to launch onto a beat, but we’re here to prepare for the Transat Jacques Vabre, to race and to try to raise our game, so we’re going to be getting down to the nitty-gritty and that’s what is particularly interesting about this race,” admitted Benjamin Dutreux, co-skippering Groupe APICIL with Damien Seguin. Early in the week, conditions are set to ease with even more uncertainty shaping the end of the course where light winds may colour play as the fleet makes landfall in Cherbourg.

Three of the pairings competing in the IMOCA category know one another inside out having already shared the 2019 double-handed racing season culminating with the Transat Jacques Vabre. Yannick Bestaven and Roland Jourdain aboard Maître CoQ IV, Jérémie Beyou and Christopher Pratt on Charal (who happen to be the IMOCA winners of the ‘Fastnet’ 2019) and finally Romain Attanasio and Sébastien Marsset, who are setting sail together again, albeit on a new machine: the Fortinet-Best Western (ex-Seaexplorer-YC de Monaco skippered by Boris Herrmann). “There were plenty of opportunities up for grabs. The post appealed to several equally talented skippers keen to sail on this boat, but I’d already opted for Seb from the moment we arrived in Brazil two years ago. I said to him that if he fancied it, I’d be happy to set off with him again,”admits Romain. “After that, he helped me out a great deal with my preparations for the Vendée Globe. He put in a hellish amount of work with the team and when the time came to find my way around this boat, I wanted someone who will support me the whole year. Aboard the boat, given that we’re very familiar with one another, we know when to give the other one some space before we reach irritation point!”

Reporter on the Rock!

This year, along the Fastnet Rock route, the IMOCA duos will be able to add a third element to the mix: an On-Board Reporter (OBR). The intimacy of offshore racing takes place behind closed doors so no one really knows what’s going on aboard the boat unless they’re actually there. As such, the role of the On-Board Reporters is to give observers an insight into the daily life of the sailors and the competition.

Gauthier Le Bec, a member of the Charal team for the past three years, has already covered many miles aboard Jérémie Beyou’s IMOCA. Alongside the skipper, he captures every moment to try to give the public a first-hand account of the offshore sailing experience. “My job consists of bringing back images from the sea and I have the opportunity to head offshore with the team. The idea is to take photos from inside the boat to show how the team manoeuvres and what life is like aboard, as well as taking photos from outside the boat using a drone for communication purposes as well as to aid performance, by observing the sails in particular,” explains the 27-year-old from Lorient.

Only a handful of races allow an image specialist aboard the boat, as was the case in The Ocean Race Europe contested in crewed configuration in the spring. For the rest of this season, two double-handed races are open to the OBR. “I rarely work during races, aside from in the Défi Azimut and the Rolex Fastnet, so it’s very interesting to see the skippers of Charal switch to another mode because from the moment they begin racing, they’re not the same men,” concludes Gauthier.

Who is Beat Fankhauser, a newcomer to IMOCA

Beat Fankhauser is bound to be a little nervous… And for good reason. Tomorrow, he’s taking the start of his very first IMOCA race and, above all, his very first race aboard his new boat #themountainman, which is none other than the ex-PURE-Best Western skippered by Romain Attanasio in the Vendée Globe.

He’s sailed around Cape Horn, the Cape of Good Hope and has already faced the high seas between Australia and New Zealand. Beat has also already presented his adventures on various TV channels. For the past seven years, he’s been training on a former IMOCA based in Barcelona in his spare time, so he has fought hard to make his dream a reality. “Naturally, I’m an outsider. However, with my decades of experience on all the world’s oceans and my years of preparation, I feel that I’m well equipped for the task ahead,” says the man who has clocked up around 20,000 miles a year sailing around the world since 2015.

How do you follow the live start and the race?

Tomorrow, the whole fleet competing in this legendary English race will leave the Isle of Wight between 11:10 and 12:40 UTC. Indeed, there will be a succession of starts for the different classes of boat according to a strict schedule, with the IMOCAs due to set sail at 11:25 UTC).

The race start will be broadcast live internationally, notably on the official Rolex Fastnet website, on the Royal Ocean Racing Club (RORC) YouTube channel and on the RORC’s Facebook page, as well as on the social networks hosted by the city of Cherbourg and those of the IMOCA Globe Series!

From 10:45 UTC in France, Anouk Corge, a journalist from L’Equipe, and Jacques Caraës, a sailor and Race Director for events like the Vendée Globe, will be live on La Chaîne l’Équipe to commentate on the wonderful spectacle across the Channel.

After the start, you’ll be able to continue following the race via the live YB tracker!

Provisional schedule for the finishes:

Saturday 14 August: Arrival of the last competitors and prize-giving ceremony