Randomness – the challenge of light winds in Leg 3 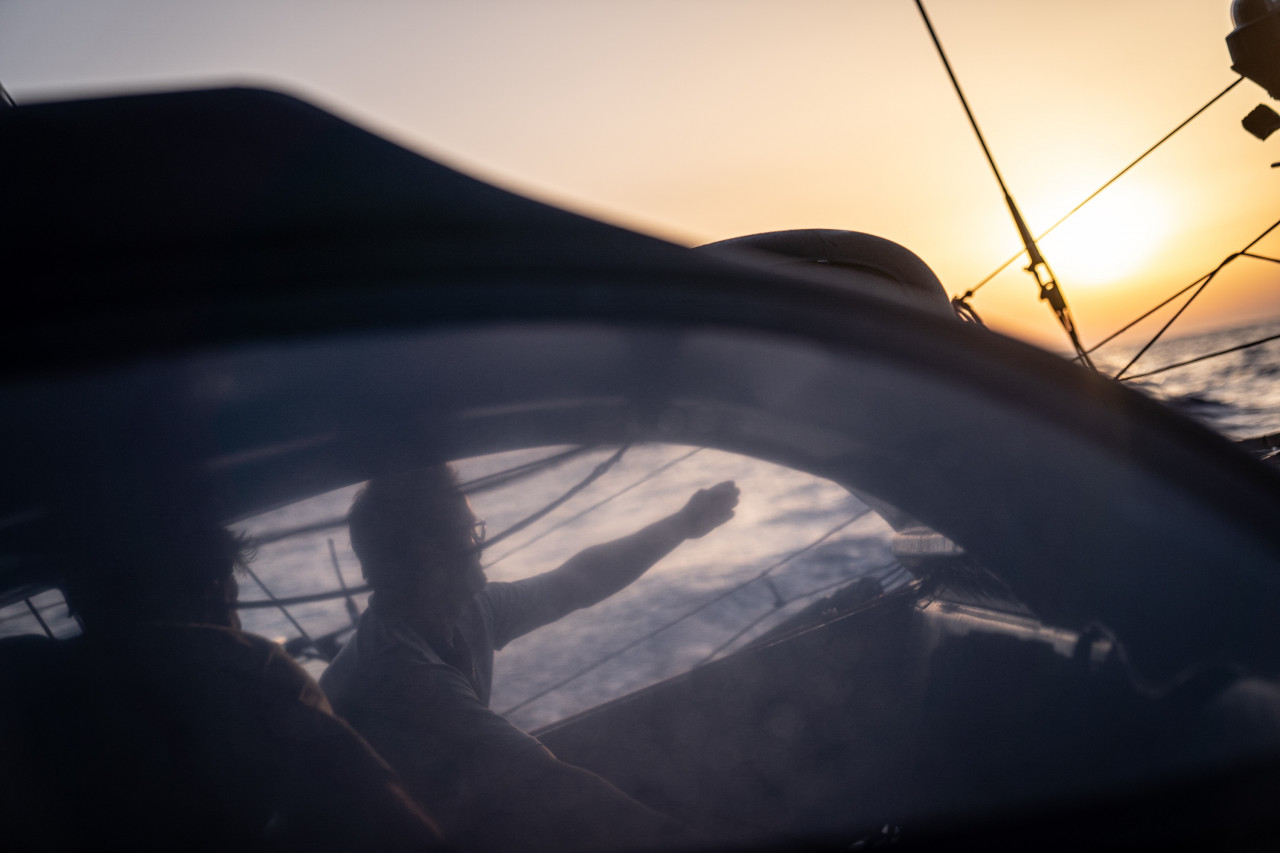 At the start of one of the slowest nights of racing in the IMOCA class’s history, Amory Ross on board 11th Hour Racing Team put his finger on the wind conditions that the fleet have been dealing with south of Majorca.

The veteran of three Ocean Race campaigns who is an accomplished photographer, videographer and writer, said the crew skippered by Charlie Enright had enjoyed some steady gradient wind in the hours after the leg start from Alicante, but then it fizzled out.

“We kind of ran out of it this morning as I am sure the Tracker demonstrates,” Ross said from on board the American IMOCA as she struggled along in the lightest of wind with – at that stage – still 382 miles to go to the leg finish at Genoa.

“Since then it has been really isolated and we’ve had very little of that gradient wind. What we are experiencing out here now is really just a lot of randomness and/or unfortunately bad luck,” he added.

This leg is all about coaxing speed out of the lightest of breezes and four of the five IMOCAs – LinkedOut, 11th Hour Racing Team, Bureau Vallée 3, and CORUM L’Épargne – have gone south of Majorca in a tight group, leaving Offshore Team Germany to build a growing lead about 100 miles to the north.

The German crew skippered by Robert Stanjek is playing the breeze off the Spanish coast and benefitting from their foiless configuration. This morning they were leading by 57 miles from Thomas Ruyant’s LinkedOut in second place with 11th Hour Racing third, 63 miles off the pace, with Bureau Vallée and CORUM L’Épargne hot on her heels.

Ross and the sailors on 11th Hour Racing Team can only watch and hope they can still find a way to catch the German boat. “It’s certainly a different approach and you have to give them credit for jumping from the pack,”he said. “The strategy for us straight out of Spain was to stick around the people that were around us in the standings and that way you can beat them on the water. But they have chosen their own road which is brave. It’s way too early to tell whether the sea breezes along the coast are going to work for them – the Med is just so unpredictable.”

Like his skipper, Ross is used to sailing the VO65s offshore and he is finding the IMOCA a lot more tweaky and time consuming, especially in light airs, than the Ocean Race one-designs. We all know they are hard to sleep on when hammering along at 30 knots, but going very slowly is exhausting too.

“This is a different kind of lack of sleep,”he explained. “There is always something to adjust, always something to tweak. In particular these boats are very sensitive to the balance of the boat, so all the internal stack – our food, our spares, our personal packs and our wet weather gear – all of that we are constantly shifting around inside just to make sure the boat is sitting in the water in the most favourable way for its hull shape.”

You would think that having all its headsails on furlers would make life easy for a full crew, but Ross says the ease of switching sails just makes the temptation to do it harder to resist. “The IMOCA is fairly efficient at being able to change headsails to accommodate changes in speed and direction,” he said. “The problem with that is that you tend to be far more anxious to make those changes so again – much like trim – every small change in wind strength and direction means everyone is up and you’re changing sails.”

While Offshore Team Germany is clearly benefitting from having daggerboards and no foils, 11th Hour Racing Team is getting some advantage from the absence of a foil on her port side, following her incident with a moored boat shortly after the start of leg 2, off Cascais.

Ross agrees that there is probably a beneficial trade-off, but says there is also a downside to having only one foil. “Clearly we are pushing less through the water without a foil on starboard tack,” he said. “That being said we are probably going sideways. These boats are designed to have foils and this boat was designed for foils and relies on the foil to project its speed forward, much like a daggerboard would on other boats. While we are probably less draggy on starboard tack compared to the other boats, most of our energy unfortunately is being projected downwind so we are slipping – if you will – upwind. Who knows whether the lack of drag cancels out the increased leeway, but we do feel like we’ve had pretty good boatspeed and can keep pace with the others.”

With three crews – LinkedOut, Offshore Team Germany and 11th Hour Racing Team – tied at the top of the overall standings, the goal is to get to Genoa still with a chance of overall victory in this inaugural staging of The Ocean Race Europe. That means a good finish in this slowest of legs and then a final push in the coastal race on Saturday.

Ross says ideally they would like to win both this leg and the coastal race, but he and the crew – that includes British navigator Simon Fisher, the French legend Pascal Bidégorry and the Swiss sailor Justine Mettraux – are feeling confident about what lies ahead.

“As a team we’ve done a lot of really good training and come from a crewed racing background and we’ve always performed well on coastal courses, so if we can hang with these guys and get into Genoa on the podium, that gives us a really good chance for the coastal segment there,” he said.