Ruyant sneaks ahead to be first at the IOC-UNESCO Waypoint 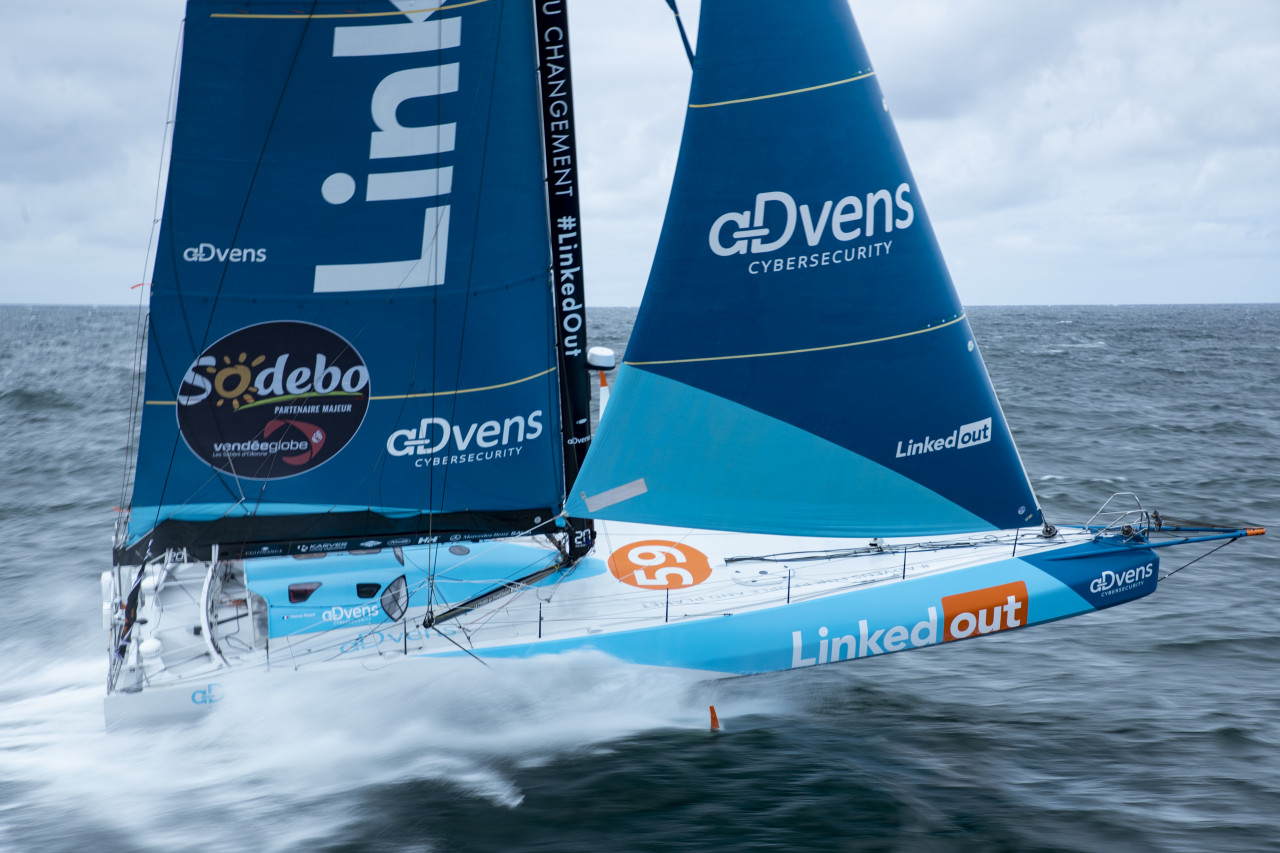 Thomas Ruyant regained the lead of the Vendée-Arctique-Les Sables d’Olonne Race at exactly the right moment today as he became the first skipper to round the turning mark off the southwest corner of Iceland.

Ruyant on board LinkedOut had been in third position behind Charlie Dalin on Apivia and Jérémie Beyou on Charal as the leading trio approached the IOC-UNESCO Waypoint southwest of Iceland in very light and fickle winds.

But staying to the left of the pair ahead of him, he tacked inside them in the final approach to the mark and rounded the virtual corner on this unique racetrack just a mile ahead of Dalin, with Beyou three-and-a-half miles back in third position.

Ruyant dominated the early stages of this mainly upwind course before dropping to third place during the traverse of the depression west of Scotland. Towards the end of his fifth day at sea, he is now heading south into a building westerly airstream that is rolling off the top of a high pressure system located about 550 miles due south of LinkedOut’s bow.

The 39-year-old Frenchman based in Lorient has achieved more than just bragging rights because he is also awarded a timepiece from Official Race Timekeeper Ulysse Nardin for being first at the mark. The question now is will he pocket a second one for first at the finish off Les Sables d’Olonne in a week’s time?

Ruyant has been relishing the chance to race his new LinkedOut foiler in this most unusual of IMOCA seasons and he’s been feeling the change in temperatures too.

“It’s fresh this morning,” he said several hours before the mark rounding. “Since last night it feels really much colder. I’ve put all my gear on and I’ve got my hat on.” Ruyant worked his boat hard during the fast run north before the wind eased getting close to the mark."

“I found a good mode with the boat last night,” he explained. “It’s a point of sail where she’s moving fast and then I spent a lot of time trimming her. I still managed to find some time to take a nap in 30-minute shifts and then I was getting back to the adjustments as the wind wasn’t completely stable in direction. I tried to take care of the settings and the trim of my boat all night long.”

On Wednesday race director Jacques Caraës decided to move the Gallimard Waypoint, that marks the southern extremity of the course, much further north to a position about 400 miles off the Atlantic coast just below the latitude of Les Sables d’Olonne.

This shortens the course from a theoretical distance of 3,566 nautical miles to 2,807 miles, but it means the backmarkers in the fleet are now unlikely to become ensnared in a large area of high pressure spreading north from the Azores.

Ruyant had been wondering whether it was time to shorten the course and had been looking at his supplies of food on board LinkedOut and thinking about rationing. “I was starting to look at my stock as it would have been quite long,”he said. “I think this reduction in course is a good decision by the race management. It’s shortening it a bit but we’ve still made it to our Icelandic waypoint so it’s already huge and successful.

“It’s the first time we’ve been up here with our boats for a course of between 10 and 12 days,”he added, “so it’s a good start to the Vendée Globe (season) in very varied conditions, so it’s a great race. It’s a race with a good course, different conditions, lots of strategic choices and trajectories. I wasn’t always very inspired, even if I was convinced of my choices at the time but that’s the game of the race.”

Behind the leaders the fleet is bunched in tight groups and concertinaing with a second echelon led by Samantha Davies on Initiatives-Coeur in fourth place about 14 behind Ruyant. She has Boris Herrmann on SeaExplorer-YC de Monaco close behind her just 16.7 back in fifth place who is followed a mile further back by Kévin Escoffier on PRB.

The third group on the water is the pairing of Isabelle Joschke on MACSF in 7th place (+22.6) and Yannick Bestaven in Maître CoQ IV (+26.1).

Then comes a fourth bunch led by Clarisse Crémer on Banque Populaire, still the top non-foiler in the ranking, who is 57 miles off the lead in ninth place. She has Fabrice Amadeo on Newrest-Art et Fenêtres (+70) astern of her in tenth position with Kojiro Shiraishi on DMG Mori Global One a few miles to windward in eleventh, a further six miles back.

At the rear of the fleet, Britain’s Miranda Merron on Campagne de France in 15th place (+249), leads Manuel Cousin on Groupe SÉTIN by just three miles, while Clément Giraud on Vers Un Monde Sans Sida is in last place, another 18 miles behind Cousin and 270 miles off the leading pace.

Herrmann, meanwhile, has now deployed his Argo float which will measure temperature, salinity and pressure data of the top 2,000 metres of water in this area of the ocean for the next four-five years. The float will automatically send its data back to scientists and has been donated by Argo-France Program in partnership with UNESCO’s Intergovernmental Oceanographic Commission and the Joint Centre for Oceanographic and Marine Meteorological Observing Programme Support.