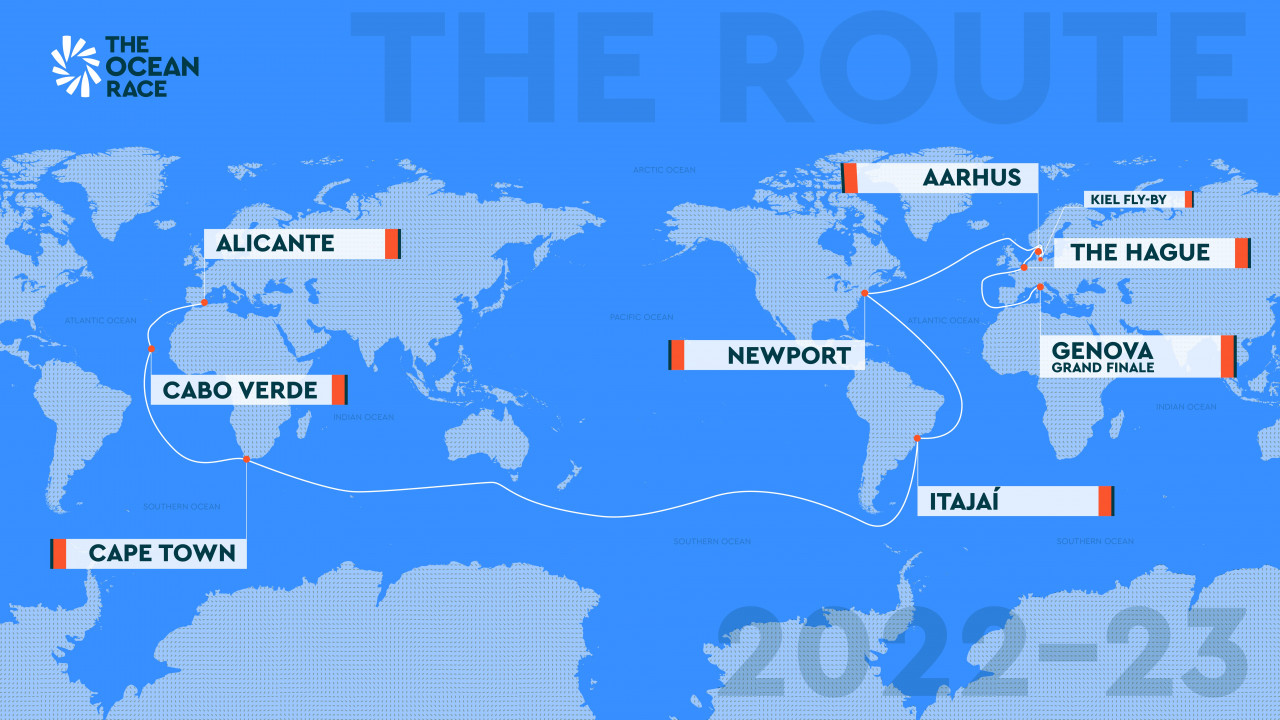 Dates for all eight stopovers, as well as a new Fly-By past Kiel, Germany, have now been confirmed for 14th edition of The Ocean Race

The Ocean Race 2022-23 will visit nine iconic international cities over a six-month period, with leg one starting from Alicante, Spain, on 15 January 2023.

The start of the 14th edition of The Ocean Race, early in the new year, will follow the Reyes holiday period in Spain, and see the two racing fleets (the foiling IMOCAs and one-design VO65s) depart on a 32,000 nautical mile (60,000 km) race around the world in separate divisions.

“The updated course and schedule for The Ocean Race 2022-23 provides an intense six-months of racing around the world and will challenge the best sailors and teams in a way that only The Ocean Race can do,” said Phil Lawrence, the Race Director.

“We have added the longest leg in the history of the event - taking the fleet three-quarters of the way around Antarctica - and for the first time, the race will start and finish in the Mediterranean.

“The winners of this edition of The Ocean Race will need to demonstrate elite skill, consistency across all manner of sea conditions, and resilience in the face of the inevitable setbacks. This will be beyond anything they will have encountered in any other sailing.”

The first leg is a 1,900 nautical mile sprint from Alicante to Cabo Verde, the first time the Race has stopped at the African archipelago. Historically, the fleets have sailed past the islands as they head south down the Atlantic. Whilst in Cabo Verde, The Ocean Race will take part in its famed Ocean Week, with a focus on local and international sustainability issues.

Leg 2 will start on 25 January and see the fleets racing across the equator, south to Cape Town, the 12th time the Race has stopped in the southern tip of Africa, making it the most visited stopover in this edition of the event. This will also be the first of three ‘haul-out’ stops, where the boats will be lifted from the water for maintenance.

Next up is a record-breaking leg - the longest racing distance in the 50-year history of the event - a 12,750 nautical mile, one-month marathon to Itajaí, Brazil.

In the finest tradition of The Ocean Race, this leg takes the IMOCA and VO65 sailors down to the Roaring Forties and Furious Fifties of the Southern Ocean. Antarctica is to the right and the fleet will need to pass all three great southern Capes - the Cape of Good Hope, Cape Leeuwin, and Cape Horn - to port, without stopping, for the first time.

There will be another extended, haul-out stopover in Itajaí, Brazil, following this epic southern leg before racing resumes heading north, through the doldrums, across the equator and up to Newport, Rhode Island, on the east coast of the United States.

From there, the Race returns to Europe, with a transatlantic leg to Aarhus, Denmark, followed by a Fly-By of Kiel, Germany, en route to a stop in The Hague, The Netherlands.

Then, it’s the final offshore leg - the Grand Finale - to Genova, Italy, for a Mediterranean finish to the race.

There will be in-port races in the days before the leg start in Alicante, Cape Town, Itajaí, Newport, Aarhus, The Hague and Genova. The in-port racing will be scored as a separate series for each fleet, with the result acting as a tie-breaker in the overall race.

The Kiel Fly-By is a new addition to the race course. The race was last in Germany for the finish of the 2001-02 edition, won by the German team, illbruck. Now, in this 14th edition, two German IMOCA teams have their sights set on the race - Offshore Team Germany and Team Malizia.

“It’s fantastic to have Kiel added as a Fly-By to what was already an iconic race route,” said Robert Stanjek, who skippered Offshore Team Germany to victory in the inaugural edition of The Ocean Race Europe this past spring. “This upcoming edition of The Ocean Race is shaping up as an incredible challenge and the opportunity to sail past a home crowd in Kiel as we near the end of our race around the world is a dream come true.”

There will be Prologue racing for both IMOCA and VO65 fleets scheduled in the second half of 2022, with details to be confirmed. Both fleets will assemble in Alicante during the holiday period at the end of 2022, ahead of the leg one start date on 15 January, 2023.