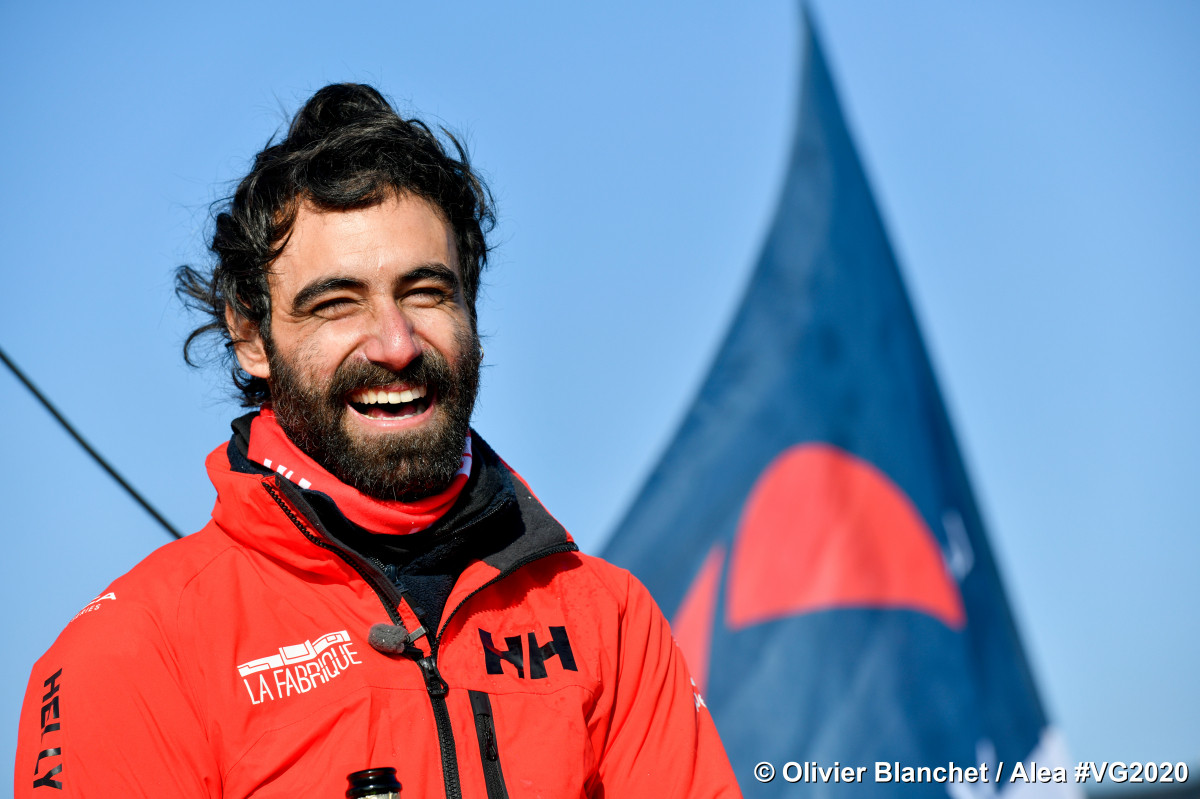 Completing his second Vendée Globe today at just 27 years of age, Roura was the youngest competitor among the 33 solo skippers who left Les Sables d’Olonne on Sunday November 8th.
In the 2016-17 edition, Roura made history, then at 23 years old, as the youngest ever sailor to finish the race. This time, and racing a more modern, competitive boat than in 2016-17, Roura suffered technical problems with his keel hydraulics early in the race which reoccurred until he finally had to fix his keel in a central position resulting in a loss of performance.

Roura grew up very much as a child of the oceans graduating from his native Lake Geneva as a typical six-year-old in an Optimist to extended blue water family cruising from the age of eight where his classroom was learning the lore and the skills of ocean passages. Encountering Mini Transat competitors in Lanzarote in 2001, Roura was inspired and bought his own Mini 650 on which he cruised extensively at the age of 15 around the Caribbean Islands, learning and training on his own.

Roura did the Mini Circuit from 2009 before moving to the IMOCA class with the Superbigou on which he did the Route du Rhum (2014), the Transat Jacques Vabre (2015, finishing 10th) and then his first edition of the Vendée Globe (2016).

To be considered an adventurer does not sit well with Roura; he regards himself as racer and his solo North Atlantic record of 7 days 16 hours and which he set in 2019 underpins his competitive drive. He is a tough, accomplished skipper capable of incredible feats when fate is against him. Four years ago, the skipper crashed into an unidentified floating object near Point Nemo and replaced his rudder despite 45 knots of wind.

For this 2020 edition, Roura set up his programme to be more competitive, taking on the 2007 Finot Conq design which finished second in 2009 with Armel Le Cléac’h. His aim was to finish in the top third of the fleet and he fitted foils to enhance the boat’s performance.

In the first days before the intertropical depression Theta, which sweeps the Atlantic, the fronts followed one another. The skipper of La Fabrique spoke of his doubts at the time, confiding: "Sometimes I wonder what I'm doing here.”

But he held firm until at the end of November, Roura faced his first major oil leak from his keel rams. "With every movement of the keel, oil spurts out,” he explained. With difficult repairs to make, the gaps to the leaders got bigger all the time.

Roura struggled with the disappointment that he was no longer competitive within the front runners and at losing touch with the top group. "I have a sadness deep inside me that I find hard to accept," he explained when racing south of Madagascar.

After entering the Pacific on Christmas Day, he was the victim of another oil leak on the 26th December. And so, he began another repair session that took him more than 12 hours to get the keel hydraulic system fixed with the keel in the middle of the boat. Then he had to climb the mast and also repair his hydrogenator whilst always keeping an eye on his keel problems. "I'm in survival mode," he said at the time.

The climb back up the Atlantic wasn’t good either with tough and changeable weather. But a stoic Roura observed: "My rivals out here probably have their worries too, but I really feel that my situation is the worst possible. I really see this Vendée Globe as such a mental and physical test.”

Finally, after over 80 days of racing, he was rewarded over the final ten days with a close battle. His match race with Stéphane Le Diraison saw them side by side for the final 48 hours before the finish. "It adds spice, it's really cool," Roura reported.

It is not the first time the two skippers have found themselves in such a situation, and two years ago only 4 minutes and 43 seconds separated them on the finish line of the Route du Rhum - Destination Guadeloupe. Roura won that match between the near identical Finot Conq designs and was able to repeat the feat again today, after gaining in the final miles of the race.

Although he was not spared his troubles on this Vendée Globe, the Swiss racer finished it for the second time in a row and that is a feat in itself. And he is already dreaming bigger again.

Calm and contented, the stress gone, Alan Roura was a picture of happiness as he was reunited with his baby daughter Billie and his wife Aurelia minutes after finishing his second Vendee Globe in 17th position on La Fabrique...here are Alan's first words after finishing.

"The rankings, yes we follow it and we are focused on it  throughout the race, but we do not realize what we are actually doing. We had difficult weather conditions and my technical problems cost me dearly. At one point, you say to yourself that you just have to finish and regress a little bit to adventure mode; you learn to sail differently. I still wanted to have fun to enjoy it but it took a little while to get there. The race was painful for me for a good part of the course. I have the whole keel system not working any more I had my first problems in the entrance to the deep south. And from the south of New Zealand, I can no longer cant the keel. At one point, my keel was moving around. And then I was thinking, I hesitated, considering stopping. And then, sailing without a “keel” means sailing with a boat that heels a lot. For the skipper it's hard, you have to accept to live a race in which you will inevitably are going to be beaten by competitors. I managed to experience this race in a different way. As a sailor you need to do races like this with some hardship for me, this Vendée Globe was like that. Now I am ready to come back and to it stronger. Meantime I will already start by making myself good food! I'll be back on the water soon. After with what support? I do not know. I smile and I do want to be back on the race. As long as you haven't won the Vendée Globe, you want to go back. But I wouldn't sign up if it was just to relive this Vendée Globe once again, but rather for an edition like 2016! I wish I could be competitive and to race with the boats in front. "

THE STATS OF ALAN ROURA’S RACE

Distance actually travelled on the water: 28,603 miles at 12.51 knots of average speed