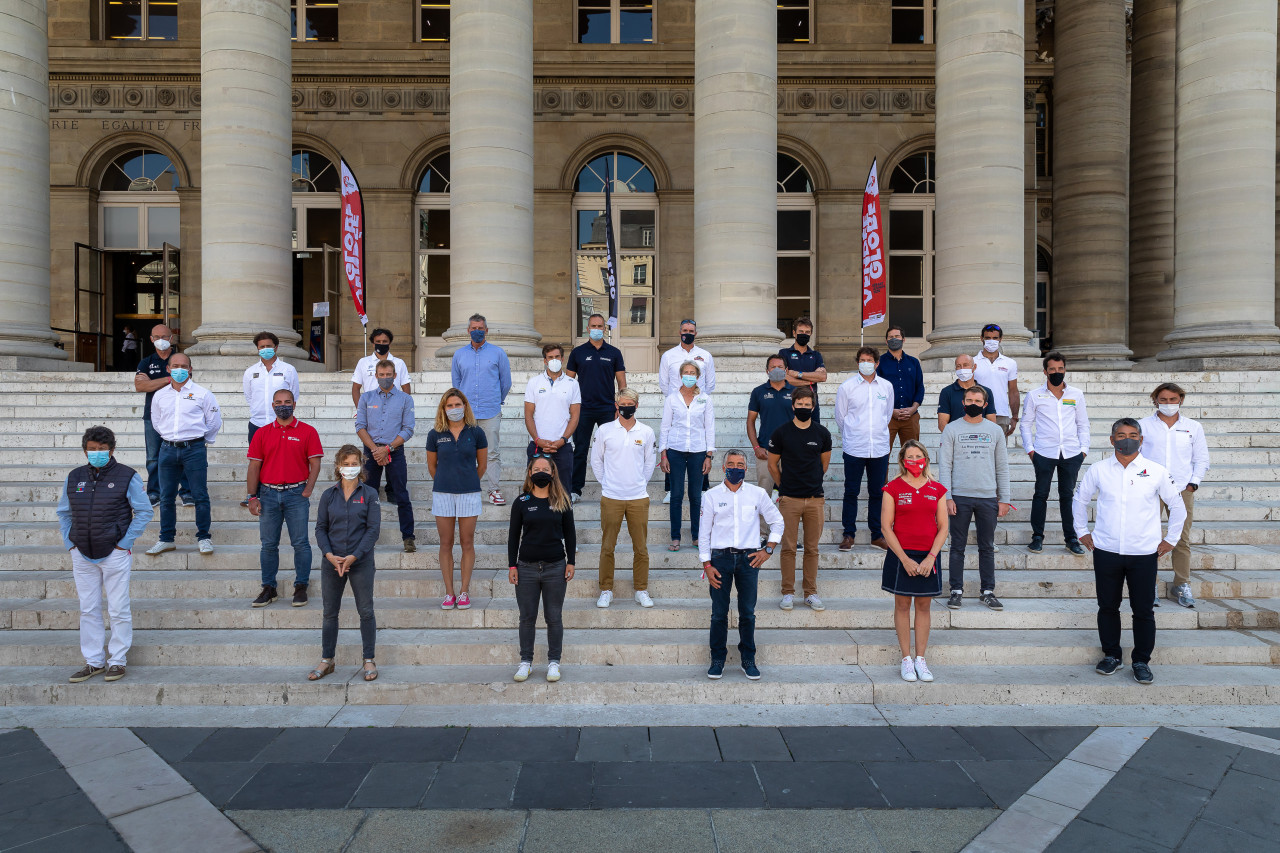 The official press conference for the ninth edition of the Vendée Globe was held today Thursday, September 17 at the Palais Brongniart in Paris. The event mustered as many sailors, partners, organisers and journalists as was safely possible.

This ninth edition promises to be one of global sport’s outstanding events spanning the winter of 2020-2021. Since its inception in 1989 the race has never before attracted such as a big and varied field. On November 8 in Les Sables d'Olonne, on France’s Vendée coast 33 solo sailors are due to take the start. Not since the 2008-2009 edition, when there were 30 starters, has the field been so large. This time it includes no fewer than ten non French skippers and there will be a record number of six female skippers.  The standard of the competitors is particularly outstanding. Two sailors who made it to the podium in 2017 are visible proof of that. British sailor, Alex Thomson will be competing for the fifth time, while France’s Jérémie Beyou is back for his fourth attempt. These two experienced talents will face a lot of competition from some ambitious contenders, many of whom will be taking part for the first time.

There are 18 ‘bizuths’ or rookies, sailors out to take on the Vendée Globe for the first time. Again this is a record number. And all have already amassed a wide range of appropriate experience and success in other events and other types of sailing. Among these rookies is France’s multiple Paralympic sailing champion (Damien Seguin - APICIL), a round the world speed record holder who is a winner of the Volvo Ocean Race (Kévin Escoffier - PRB) as well as several winners of the famous French solo multi stage race, the annual Solitaire du Figaro (Nicolas Troussel - CORUM L'EPARGNE, Sébastien Simon - ARKEA-PAPREC), as well as recent winners of the Transat Jacques Vabre (Charlie Dalin - APIVIA) and the Route du Rhum (Armel Tripon).

Women Are Out In Force

Women skippers were absent from the 2016-2017 edition. But this time they are back in force and together setting another race record. Six female solo skippers will line up on November 8. Until now the average has been two female racers competing, with for example Anne Liardet and Karen Leibovici in 2004 and Sam Davies and Dee Caffari in 2008. It was not until 1996 and the third Vendée Globe that the pioneering French women competed for the first time, Catherine Chabaud who was the first to complete the race, and Isabelle Autissier. Of the seven women to have started the Vendée Globe, two have certainly left their mark, Great Britain’s Dame Ellen MacArthur, 2nd in 2001 and Samantha Davies, 4th in 2009. Sam Davies is back this year for the third time in her career, hugely ambitious, very experienced and with great potential. The English sailor is just one of a high quality group of female solo racers who have already proven their tenacity and skills, Isabelle Joschke (GER/FRA), Clarisse Cremer (FRA), Alexia Barrier (FRA), Pip Hare (GBR) and Miranda Merron (GBR).

An Exceptional Mix Of Sport And Adventure

Winning the Vendée Globe involves a lot of different factors: a well-organised project, a fast and reliable boat, talent and luck. Some competitors bring together all these elements and are determined to perform well. But for others, the final result is not the only concern. Some are taking part for the first time to gain experience or to fulfil a life-long dream. The Vendée Globe is the only race of its kind where racing and adventure come together. Looking beyond the race itself, all of the sailors will share a common destiny as they face the elements: they will be facing up their own limits, pushing back the boundaries and going through some extreme emotions. They all share the desire to complete the 21,638-mile long solo voyage, which will take them between 70 and 100 days.

The international appeal of the Vendée Globe has continued to grow over recent years. This year, there are 10 sailors from outside of France (that is almost 30% of the fleet) representing Great Britain, Switzerland, Germany, Spain, Italy, Finland, Australia and Japan.  Indeed it is one of the international skippers who is among the pre-race favourites. Tied with Jean Le Cam in terms of number of his five previous participations, the British skipper Alex Thomson (HUGO BOSS) is the most experienced and the most successful sailor at the start with two back to back podiums achieved over the last two editions – third in 2012-2013 and second in 2016-2017, Thomson, the man with the black boat has only one ambition: to win.

The youngest competitor is the Swiss Alan Roura (LA FABRIQUE), who at 27 years old will be competing in his second Vendée Globe. The oldest is the popular veteran Jean Le Cam (YES WE CAM!) who at 61 years old is lining up for the fifth time. The broad age range really reflects the broad appeal of the discipline of solo ocean racing which continues to grow in popularity. In such a gruelling ocean race as this, it is often durability and experience which makes the difference; indeed many of the skippers are in their forties and fifties, proof that sailing is a lifetime sport and the Vendée Globe a unique and enduring challenge.

The IMOCA class has fostered advances in offshore foiling, these "underwater wings" that lift the boats above water to deliver seemingly impossible speeds for these 60 foot carbon monohulls. The 2016 edition saw the start of this technological shift. The 2020 edition sees this technology having made significant advances in foil shape, form and structure but also in corresponding hull design and structure with boats now designed and built specifically to foil, to fly above the sea’s surface for protracted periods. Nineteen of the 33 monohulls are fitted with these impressive flying appendages, including seven very latest 2020 generation boats. The 60-foot IMOCA have become more complex machines, they are much faster but exact a considerable toll in terms of skipper comfort.  That may be the price to pay as the benchmark time set by the last winner Armel Le Cléac’h (in 74 days 3 hours and 35 minutes) seems very likely to be beaten. At these high speeds, other problems occur, making life on board increasingly difficult, and more than ever testing the ability of men and women to withstand the noise, the slamming, the jolting and the awkward motion for days on end.

The Vendée Globe Is Committed To A Responsible Approach

From this edition forwards, the Vendée Globe is engaged in a responsible long-term approach. First of all, SAEM Vendée, in consultation with all the stakeholders, has committed to a more responsible event organization with an internal assessment of its impact and the implementation of concrete actions to limit those on this edition and in the future. Numerous initiatives will be carried out in the village aimed at raising awareness of ocean health, particularly among the younger audience with educational tools available through the Vendée Globe junior program. This theme will be the centre of attention in the village and displayed on all of the event's communication media. In line with the process initiated by the skippers of the IMOCA class, the Vendée Globe and the Intergovernmental Oceanographic Commission (IOC) of UNESCO are signing an agreement with the aim of collecting data relating to the ocean and the atmosphere. More than a third of the skippers in the fleet are involved in these measures and will be equipped with the instruments required to carry out measurements and collect data. Further details about this operation will follow shortly.

“I am speaking to you by videoconference because I am a contact case. I had a test which turned out to be negative and I am in excellent health.This  Vendée Globe must be exemplary in terms of the health situation we are going through, and it seems important to me that we apply the same rules to ourselves that apply to the people of the Vendée Globe. It’s a bit of a disappointment not to share this moment with you at the Palais Brongniart, but the Vendée Globe respects health constraints and if that’s the price we pay it will be a success. These are particular times. I thank each and everyone for their presence, physical or remote. My thanks go to the skippers, the teams, the sponsors, the media, and all those who contribute to the success of the event. I am thinking of Laura Le Goff, the general manager of the Vendée Globe, who is in the same situation as me, and to the wider teams.I also have a thought for Patricia Brochard, co-President of Sodebo, our sponsor, for Yannick Moreau, President of the Agglomeration Les Sables d'Olonne, and for Christelle Mor Anglais, President of the Pays de la Loire regional council.

We are all aware that this is an unprecedented situation, a big upheaval , but we must be  optimistic. This Vendée Globe, in this particular context, is a beautiful symbol. It symbolizes us all staying the course, remaining confident in the future and heading off out to sea despite the difficulties. Our prudence must not become inactivity. This is why we are working with all our partners to succeed in our missions for this  Vendée Globe.
The Vendée Globe is a solo round-the-world race, without stopovers and without assistance. The sporting level expected for this edition is such that, if I had to sum up the situation, reaching the finish line will be a great performance in itself and getting on the podium a crowning glory.

I like to repeat that the Vendée Globe is an event for the public good, owned by the Vendée. This event mirrors the values ​​of our department. It is an individual and also collective adventure, and as such inseparable from its audience."

“This is a very high level field, we have taken an extra step forward in technology but also in our sport. We have 19 foilers compared to 7 last time. And so that will be a special aspect of this race which will be very full on, very difficult . We can see that all of the work carried out by the teams: I also congratulate the designers, the design offices and the IMOCA class who have worked so hard. The boats have moved forward in terms technology. But they are ready, and the sailors are prepared. On this edition we have an added degree of competitiveness."