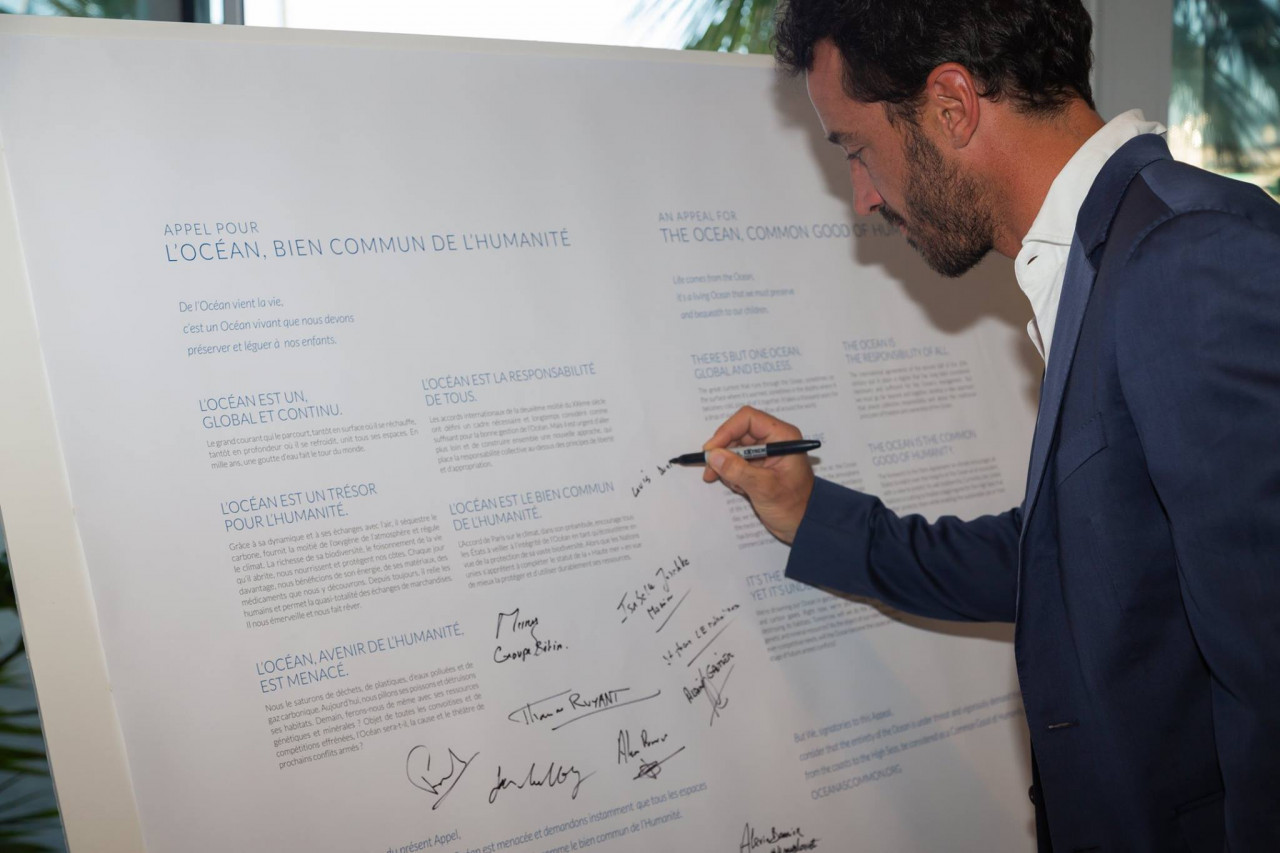 In the context of this day supported by the IMOCA class, the latter has just signed an agreement showing their support for the Appeal for the ocean to be seen as a common good of mankind (Ocean As Common) launched a year ago by the French sailor, Catherine Chabaud.

The IMOCA class, some of the skippers of which have signed up personally to measures in support of environmental causes, will shortly be issuing a programme of concrete measures, involving many people involved in acting more responsibly and showing greater respect for the environment.

The IMOCA class continues to support the Ocean As Common project

For a year now, the IMOCA class has been supporting the Appeal for the Ocean to be seen as a common good for mankind (www.OceanAsCommon.org), which was launched on 8th June 2018 during the Monaco Globe Series. To make this partnership official, the Class has just signed an agreement with Ocean As Common expressing their support of its message and carrying out concrete policies at IMOCA events. As during the Guyader Grand Prix that was held in May, the measures within the Ocean As Common programme will be stepped up this year and will be seen at various events, including the exhibition “The Sea XXL” in Nantes, the Azimut Challenge in Lorient, and the Transat Jacques Vabre in Le Havre. Next year, Ocean As Common will be involved in several major IMOCA events including The Transat, the New York-Vendée and the Vendée Globe.

Sailors, particularly when sailing around the world relying on wind power, have been able to witness for themselves the impact of man on his environment. They are vital observers and legitimate ambassadors for the preservation of the oceans and the sustainability of the natural environment in which they live and work. Some of them have developed sustainable development programmes and go even further placing the protection of the oceans at the heart of their projects, whether they are scientific or educational.

With his project “Time For Oceans,” Stéphane Le Diraison wants to stress that the preservation of the oceans should concern everyone. He invites us all to take part on our own level (citizens, businesses, leaders). Winner of the 2018 Route du Rhum, Paul Meilhat is at the vanguard of the movement underlining what is at stake in terms of the environment, particularly in his role as ambassador for the Surfrider Foundation Europe. German sailor, Boris Herrmann has fitted solar panels and very efficient hydrogenerators which should supply him with 100 % of the energy required without ever using his engine. “It is a great symbol trying to complete the round the world voyage without using a drop of diesel,” declared Boris, who is also taking a mini oceanographic lab aboard with him and has come up with an educational programme, “My Ocean Challenge,” which is aimed at children between the ages of 8 and 12. As for Alexia Barrier, she set up the 4myplanet project, which has made available an educational kit about the oceans (for primary and secondary schools) and is also committed to working on scientific and technological schemes linked to environmental protection.

Published a few weeks ago, the book "Naviguer Écologique" by Rachel Moreau, who was one of the authors of the Appeal for the ocean to be seen as a commoon good for mankind, deals with eco-friendly ways of sailing, as we look at the future of the ocean and our planet. This guide offers several rules and recommends certain measures to reduce the human impact. It features statements by IMOCA skippers, such as Paul Meilhat, Alexia Barrier, Loick Peyron, Alan Roura and Vincent Riou, who is also signed up with the WWF: "If I can bring along my vision showing the importance of sustainable fishing, the interest in developing protected maritime zones or if I can make the public more aware of plastic pollution in our oceans, it will give my ocean racing project a real meaning."