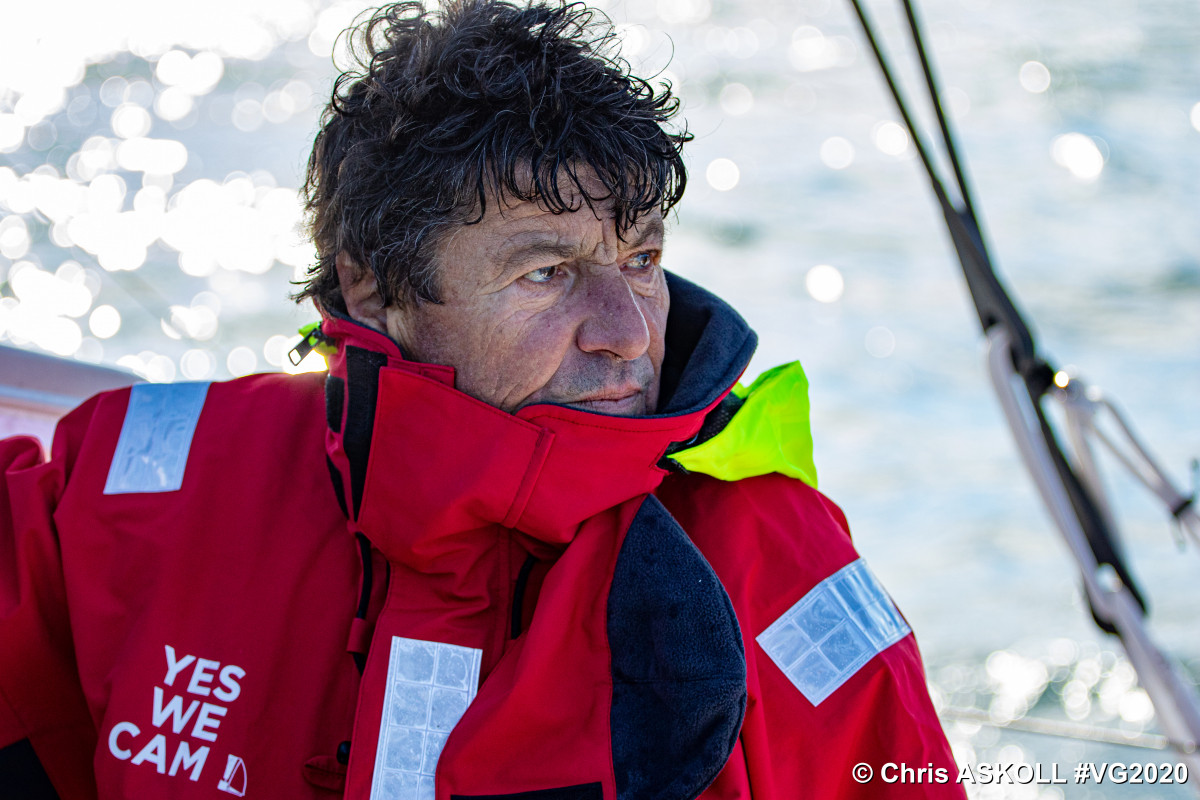 It can’t last, Cam it? Each day many of us have been expecting to see Jean Le Cam fall back to his rightful place among the non-foiling fleet, but each day the 61-year-old Frenchman confounds the designers and the form assessors.

This morning he is still holding second place as the leaders smash their way downwind through the battlefield that is Tropical Storm Theta.

By rights Le Cam should be haemorrhaging miles to more modern boats, but Yes We Cam ! – a daggerboard design from Bruce Farr built in 2006 – is still there in the podium places.

(Just to give you an idea of the miles travelled by this old boat, its former names prior to this campaign are: FONCIA, TC2, MOVISTAR, MAPFRE, Maître CoQ, Mare, Cheminées Poujoulat, Hubert, Finistère Mer Vent, Yes We Cam ! and finally CORUM L'Epargne).

It has been a masterclass by the Frenchman based at Port La Forêt who is on his fifth Vendée Globe and whose many career highlights include finishing this race in second place, back in 2004.

Ahead of him, Alex Thomson is putting the hammer down as HUGO BOSS shows its paces offwind and the fleet starts to stretch out over hundreds of miles north and south, with the backmarkers now stuck in light airs northeast of the Azores.

At the 08hr (UTC) polling this morning, Thomson was doing 17.3 knots and had stretched his lead over Le Cam to 34 miles while all his other pursuers have fallen back. Thomas Ruyant on Linked Out is now nearly 40 miles behind the British sailor in third place; Kevin Escoffier, in fourth on PRB, is nearly 70 miles behind.

The tracker shows that both Escoffier and Charlie Dalin on Apivia – who is a few miles to leeward of PRB in sixth place – have chosen a slightly more conservative route to the west of the centre of Theta, while Thomson goes for its heart.

It is early days in this race, but this could yet prove a decisive phase as Thomson gets ahead on the way to the northeast trades and his appointment with the Doldrums.

Among the skippers that are stuck in the north is Armel Tripon on L’Occitane en Provence, the Sam Manuard rocketship, who is now paying heavily for his earlier decision to head back towards the Spanish coast to fix a rig issue. In the end he decided to continue with the race but Tripon now has a long way to go to catch up with the leaders.

The early stages of this Vendée Globe have been tough on the skippers who have had to deal with a variety of weather conditions and some hard sailing in big seas. Clarisse Crémer on Banque Populaire X (currently in 15th position, 155 miles off the pace) admits that she is not looking forward to the challenge of Theta.

“Basically understand, I'm afraid, what am I saying is I'm freaking out a bit with the approach of this depression and I have been thinking for some time about the strategy to adopt,”she wrote with disarming honesty.

“I have never had severe damage before, I have had my share of little dramas, yes, things that are annoying and energy consuming now (especially at the level of stress of this rookie) but I feel that every strong gust of wind threatens the health of my boat."

“As I write it is the port hydrogenator which was torn from its support two hours ago – no biggie as I have a second one and plenty of diesel – but it is more stress and it came just at the end a of series of naps which had made me feel better. So overall I just want to look after my boat and my nerves, so I try to slow down a bit and go west I am ready to spend a bit more time in the Atlantic as long as Theta leaves me alone.”

12.05Boris Herrmann will be at the start…Seven strong partners support Team Maliz…04.05Charal and Jérémie Beyou: a partner…Three months after Jérémie Beyou's arriv…22.04Offshore Team Germany gets Vendée s…Grown up on the Île d'Yeu in the Atlanti…16.04Offshore Team Germany joins The Oce…The German team will race its IMOCA in t…05.03Ari Huusela: "First goal was to sta…It feels now like it is yes. To see the …04.03Huusela: An exemplary voyage by a p…Ari Huusela is going to be the last sail…
All news and videos
News

Seven strong partners support Team Malizia’s A Race We Must Win campaign for the next 5 years.