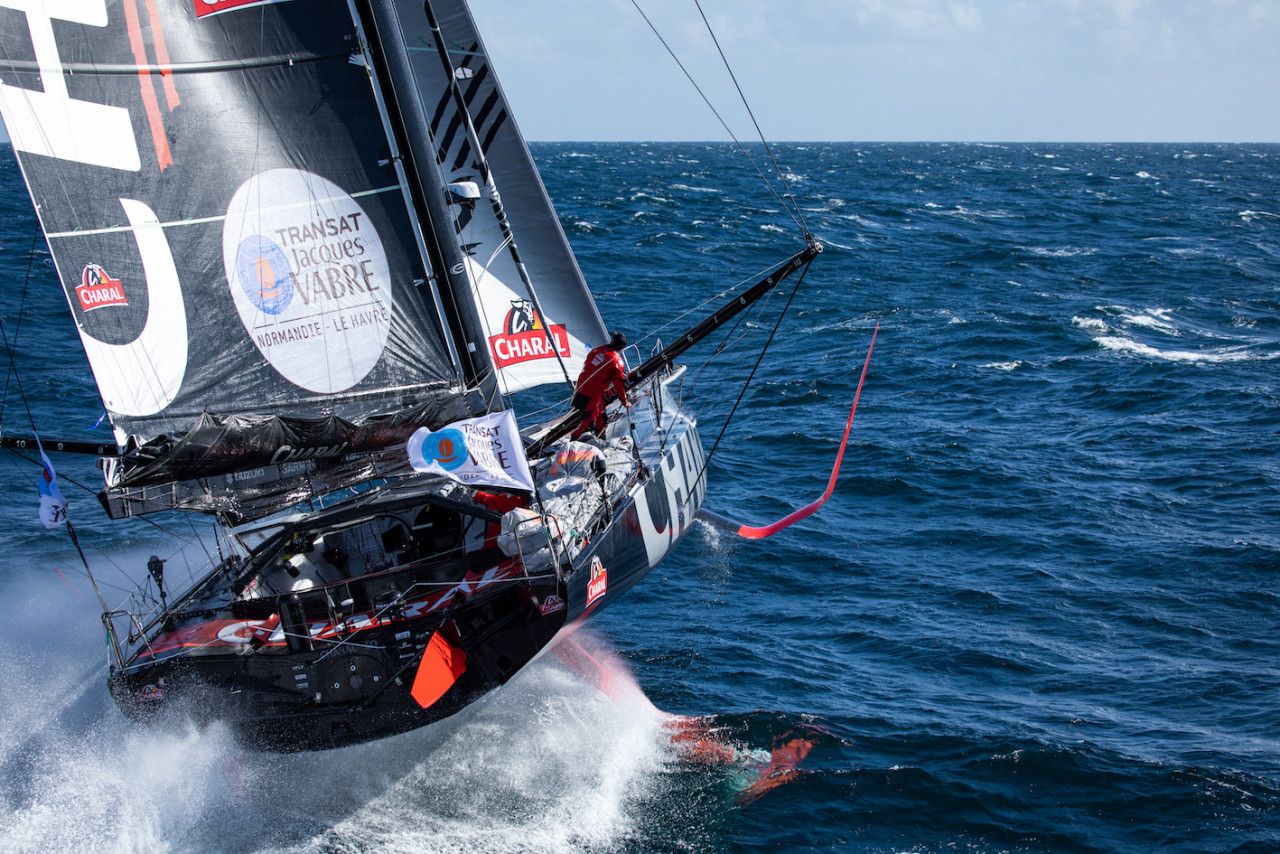 Despite the fact that several boats have changed hands since the Vendée Globe finish, and there are new launches ahead for several high profile skippers, this transatlantic race is going to be highly competitive.

Over the past few weeks the IMOCA bases in Brittany have been a hive of intense activity as crews have prepared for the longest two-handed race in the sport in what in many cases are now finely-optimised boats, with or without foils.

No less than 23 IMOCAs will take the start from Le Havre on November 7th, for this classic test when co-skippers will look to push hard 24 hours-a-day for up to 17 days on a 5,800-nautical mile course, finishing at Fort-de-France on Martinique in the Caribbean.

In addition to foiling front-runners like Charlie Dalin and Paul Meilhat on APIVIA, Thomas Ruyant and Morgan Lagraviere on LinkedOut and Jérémie Beyou and Christopher Pratt on Charal, the fleet includes five mixed male-female crews. Among them are Simon Fisher and Justine Mettraux on 11th Hour Racing Team-Alaka’i, Isabelle Joschke and Fabien Delahaye on MACSF and Louis Duc and Marie Tabarly – making her debut in the IMOCA Class – on Kostum-Lantana Paysage.

This race also sees the return to competition of Vendée Globe winner Yannick Bestaven sailing with Jean-Marie Dauris on Maitre CoQ IV which was forced to retire from the Rolex Fastnet Race after a collision at the start. Another closely-watched performer will be the new 11th Hour Racing Team IMOCA, Mãlama, co-skippered by Charlie Enright and Pascal Bidégorry, which had to retire from the Défi Azimut 48-Hours with steering failure.

Elsewhere in the fleet, many Vendée Globe veterans are returning to the fray, among them Louis Burton sailing with Davy Beaudart on the Sam Manuard-designed Bureau Vallée; Romain Attanasio and Sébastien Marsset on Fortinet-Best Western (formerly Malizia); Manuel Cousin and Alexia Barrier teaming up on Groupe SÉTIN-4MyPlanet, and the Italian skipper Giancarlo Pedote racing with Martin Le Pape on Prysmian Group.

The Transat Jacques Vabre is always a formidable challenge, not least because it leaves from the English Channel coast in November and then features a potentially rough crossing of the Bay of Biscay, before warmer climes and possibly easier trade wind sailing conditions are reached south and west of the Iberian coast.

This year’s race is particularly interesting because it involves two transits of the squally and often windless Doldrum belt, as the IMOCA’s head for the Brazilian archipelago of Fernando de Noronha, before turning back on a north-northwesterly heading for the finish.

Many will remember the last edition two years ago when Beyou and Pratt on Charal were leading at the Doldrums, only to park up and be overtaken by race winner Dalin, then sailing with Yann Elies on APIVIA – this time Elies is racing with Sébastien Simon on ARKEA PAPREC.

This year Dalin and Meilhat, with whom he has built a formidable partnership with consecutive victories in the Fastnet Race and the Défi Azimut 48 Hours, will start the Transat Jacques Vabre as favourites and they know they will be the ones to catch. “Yeah it would be great to defend our title, that would be a great success for sure,” Dalin, 37, who hails originally from Le Havre from where the race sets sail. “I think we have ticked the boxes for it in our preparation and after that it is up to us to take the opportunity, if we get it.”

Dalin points out that the Transat Jacques Vabre is a completely different beast to either the Fastnet or the Défi Azimut 48 Hours, so the formbook may not prove accurate. “There are definitely more obstacles than the Fastnet race or the 48 Hours – one of them is the Doldrums and the other is tiredness,” he explained. “This race is longer and these boats take a toll on the sailors when you drive them at high pace. Sailing at 20 knots, for example, is very easy compared to 25 – it’s not a linear progression. If you double your speed, you aren’t doubling the discomfort, it’s much more than that.”

The APIVIA skipper has proved adept at keeping his boat in one piece while sailing competitively at the front of the fleet and, one suspects, the way he and Meilhat will approach the Transat Jacques Vabre will be no different. “We will be looking at more than two weeks at sea and a full crossing of the Atlantic, so it is a slightly different exercise to what we have done so far this year since the Vendée Globe,”he said. “The way you race with such a long route is slightly different too – you’ve got more parameters to take into account and you have to push enough to be ahead but also preserve your boat to keep it one piece. You have to strike the right balance between pushing and preservation.”

Among those looking to steal a march on Dalin and Meilhat are the ARKEA PAPREC duo of Simon and Elies who will be looking for a good result on a boat that has had some bad luck in its short racing career. Simon, who is hunting for a new title sponsor for his IMOCA campaign, says Apivia is currently on a slightly different level to everyone else. “But we have a chance,”he told the Class. “Our boat is very good and we don’t have any problems now, so we think it can be a good race for us.”

Simon says the start is the critical bit, as the fleet heads out of the Channel in the early stages of the winter. “The north Atlantic in winter is very difficult,”he said. “We need to make sure that we don’t break the boat at the start – we know IMOCAs are really fast and it is difficult to keep the boats safe – so I think the start will be the most important part of the race.”

Simon also made the point that the leg from Fernando de Noronha up to the finish at Fort-de-France is new territory for him. “I don’t know this part of the Atlantic because it will be the first time we will be sailing in this area. I think it could be dangerous because there are fisherman off the coast and there could be debris in the water coming out of the mouth of the Amazon off the Brazilian coast,” he said.

For British skipper Sam Davies, sailing with Nicolas Lunven on Initiatives-Coeur, this Transat Jacques Vabre will be her last race in her 2012-vintage IMOCA as she prepares to move on to a new Manuard boat next year, also under the Initiatives-Coeur banner. The irrepressible Davies can’t wait to get to the start village at Le Havre.

“I think it’s going to be an amazing line-up and just being in the port of Le Havre is going to be pretty incredible,” said Davies who is one of nine non-French sailors taking part in the race. “For a post-Vendée Globe year, which is normally a quiet one when there are not so many competitors, it’s fantastic to see the line-up in the IMOCA Class and it’s a pretty international fleet as well as being highly competitive.”

Davies, 47, seems unfazed by taking on the north Atlantic in November and is also looking forward to her two appointments with the Doldrums. “I think the second Doldrums, in theory at least, shouldn’t be so sticky because the course is taking us quite a long way west. I don’t know if it might make it easier to get through the Doldrums on the way down as well – probably not,” she said.

Davies says the Transat Jacques Vabre is long enough not to be entirely about out and out speed and tactical decisions and choosing the best route will also be critical to a successful outcome. “It has the potential to be a close race, but we must not forget it is nearly 6,000 miles long, so it’s not just going to be down to pure boatspeed,”she said. “And we are leaving Le Havre in the middle of winter and heading into the north Atlantic – but those are things I love as well – I am looking forward to all the things that will get thrown at us,” she added