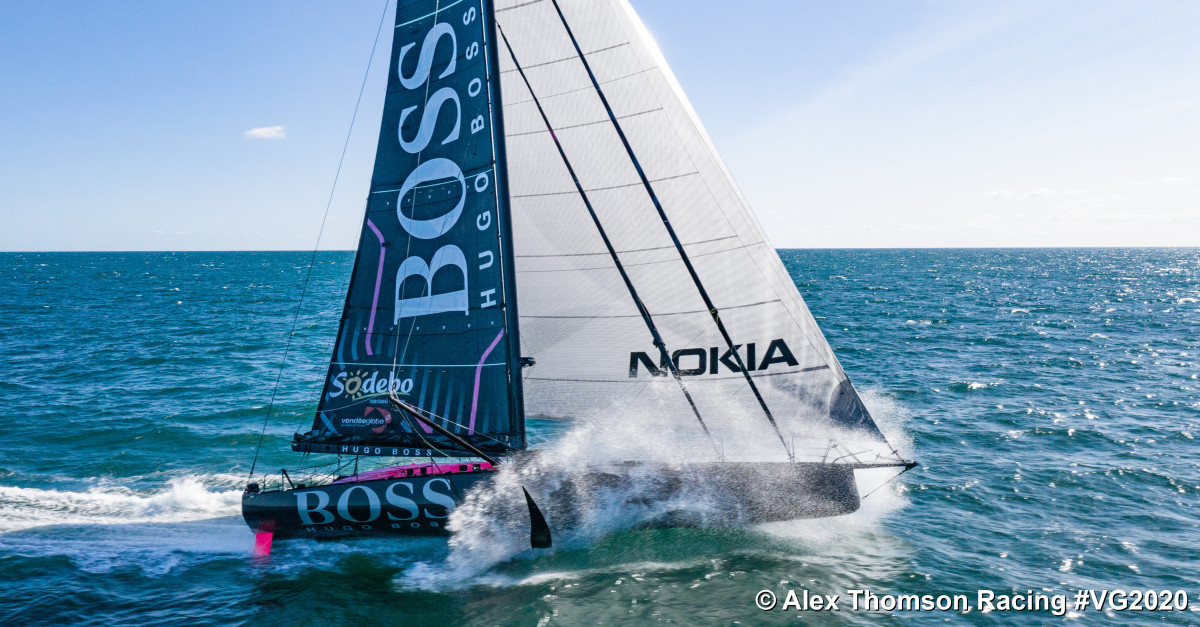 “Oh no, not again…” would be a succinct summary of many of the comments on social media as the sailing world in the northern hemisphere awoke to the news that Alex Thomson has a structural problem on board HUGO BOSS.

On the tracker this morning, his black boat is slowed to just under six knots and is now in third place behind Thomas Ruyant’s LinkedOut and Charlie Dalin’s Apivia who are 90 miles and 70 miles ahead of Thomson respectively as they continue south towards the Southern Ocean.

The HUGO BOSS team is not saying exactly what is wrong but it must be fairly serious for Thomson to take his foot off the gas and for the team to issue a statement. What we know is that he alerted the team early yesterday evening about “a possible structural issue.”

The statement also revealed that Thomson and his team are in contact with his naval architects, VPLP, and structural engineers – signs again that this must be a fairly serious problem and almost certainly one with the hull.

Although going slowly, Thomson was still heading south – possibly a good sign –and his many supporters will be hoping that this is something he can fix. But anyone who has watched this race over the years will also be fully expecting to see him turn his bows to the west and head for a port of refuge on the South American coast.

If Thomson is out, it will be yet another disastrous blow to a career that has often promised so much but has failed to deliver as a result of a series of calamities and accidents.

This is Thomson’s fifth attempt at the Vendée Globe having failed to finish in the first two and finished third and then second in the last two races. This was the one where he was hoping to go one better and reach the top of the podium for the first time, not only in a Vendée Globe, but in an IMOCA race of any sort.

During the early morning radio call today Dalin said he hoped his British rival would be able to continue. "For Alex I hope it's not too bad and the extent of the damage is limited,” he said. “Above all, I hope that this does not mean the end of the Vendée Globe for him. We have a great race with him, and this trio we are in is very stimulating.”

If Thomson is forced to stop or retire, it will leave Ruyant and Dalin alone at the head of the fleet, 20 miles apart and already more than 250 miles ahead of a chasing pack of seven boats, still led by Jean Le Cam on Yes we Cam! The leading pair still have about 1,000 miles to go before they start to hit the weather systems of the Southern Ocean but they may be hard to catch if they maintain this advantage over the chasing group until then.

Dalin spoke about the conditions as he and Ruyant continued to sail along a narrow corridor of wind towards a light patch blocking their way south. “It's still light wind,” he said. “We're going to work through this mouse hole, this tiny area of ​​wind, with the goal of staying in it. We must avoid the edges. I'm going to try to stay here in this corridor and so I am going to watch the weather a lot, which is not very modelled. The information changes a lot depending on the files, but despite that, you have to try to stay in this area, in the middle of the corridor of breeze. We are here for a while: we will have this for several days and, at some point we will no longer have the choice but to cross an area of ​​very weak winds to reach the southern ocean motorway."

"I adapt to the situation I have,”he added. “I study the information given to me in practical terms and I compare it with reality. We have a lot of information tools, between weather files, satellite images…we have plenty to do. My goal has always been, and remains to be, in this leading group, to be in the right pack when we go into the south. First or third, it doesn't matter: I just want to be in the right group. Apivia is doing well and is in very good condition.”

Roughly 3,000 miles north of Ruyant, Jérémie Beyou on Charal is continuing to make excellent progress after re-starting eight days late, following the repair of his boat. He is currently west of the Canary Islands and is already less than 1,000 miles behind the fleet backmarker, Kojiro Shiraishi’s Charal sistership, DMG Mori Global One.