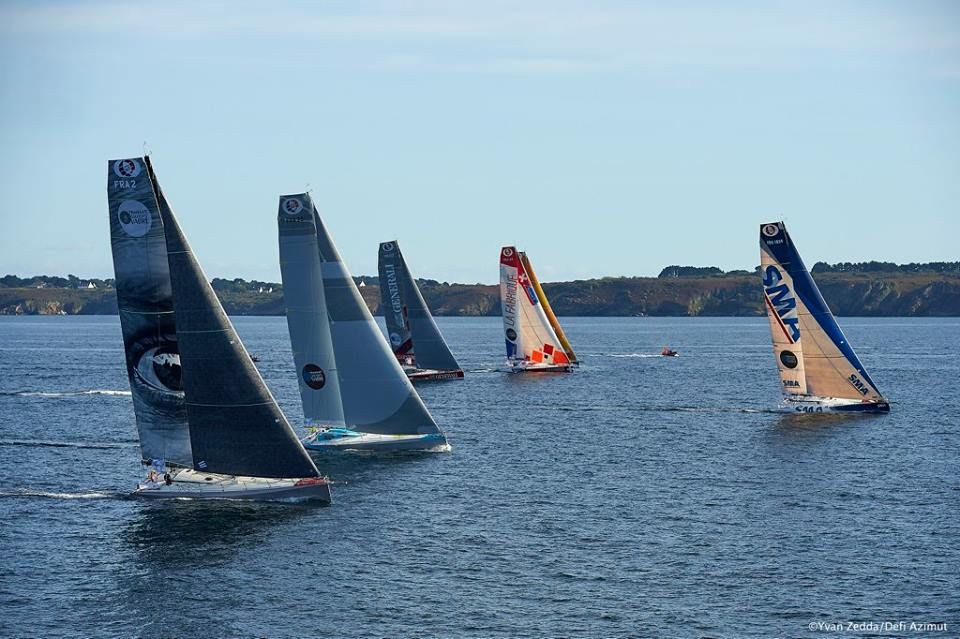 With one month to go before the start of the 13th Transat Jacques Vabre, which will bring together 13 IMOCA competitors, the duos are fine-tuning their preparation for this 4350 mile course between Le Havre and Salvador de Bahia (Brazil).

With a month to go to the start of the 13th Transat Jacques Vabre, which will see thirteen IMOCAs taking part, the double-handed crews are putting the final touches to their preparation for the 4350 mile course between Le Havre (Normandy) and Salvador da Bahia (Brazil). Three of them, including some of the biggest names, are busy this week at a training  course at the Finistère ocean racing centre in Port-la-Forêt (Brittany) - Jean-Pierre Dick/Yann Eliès (StMichel-Virbac), Paul Meilhat/Gwénolé Gahinet (SMA) and Tanguy de Lamotte/Samantha Davies (Initiatives Cœur). The method used at these courses, run since 2000 for the IMOCA skippers, has certainly paid off, as the Finistère Centre has given a helping hand to the last five winners of the Vendée Globe…

There are some similarities between running and ocean racing. Going through a training course at the Finistère Centre is rather like an interval training workout when preparing for a marathon. “The programme is intensive, demanding and requires a lot of effort, as the aim is to push the boats and men as hard as possible and get them to work to ensure everything comes naturally,” explained Christian Le Pape, director of the Centre. “Each training session involves bringing together in a short session everything you encounter when racing out on the ocean, where there are all sorts of difficulties to deal with: performance, looking after the gear, being competitive. We do some sterling work here with sailors, who are all very committed and that we know well.”

“Preparing for the first 24 hours of the Transat Jacques Vabre”

Four of the thirteen double-handed crews competing in the Transat Jacques Vabre attended the first three courses run in August and September. They are all top guns in the IMOCA circuit: Jean-Pierre Dick/Yann Eliès (StMichel-Virbac), Paul Meilhat/Gwénolé Gahinet (SMA), Tanguy de Lamotte/Sam Davies (Initiatives Cœur) and Morgan Lagravière/Eric Péron (Des Voiles et Vous!). Back from their qualifier for the Transat Jacques Vabre, the latter crew did not take part in the fourth training course this week. However, the three others attended, so there were two foilers (StMichel-Virbac and Initiatives Cœur) and one IMOCA with highly optimised straight daggerboards (SMA).

“With a month to go to the start in Le Havre, the main goal of this course was to prepare everyone for the first 24 hours of racing, which is becoming increasingly important. Races can be won or lost in this initial stage. So, it is vital to get into the swing of things and be out there in front,” stressed Christian Le Pape.That is why after the first day of training on Tuesday, which was already physically very demanding, the three double-handed crews involved ran through a night-time exercise. On Wednesday at four in the afternoon, they set off to sail a very complete 195-mile course enabling them to deal with all the different points of sail, with a lot of time focusing on  reaching (with the wind on the beam).

How did SMA cope with the foilers?

They had to deal with a range of situations, sail changes, manoeuvres, and wind shifts. Once again, the three crews worked to ensure everything fell into place in moderate winds. Christian Le Pape: “On this race course, which should have suited thefoilers, we saw how SMA made up for her speed disadvantage in some points of sail. We’ll run through that at a debriefing on Friday to analyse the data we have obtained. In any case, thanks to these training courses, Paul Meilhat and Gwénolé Gahinet have been able to get some useful information about their potential and that of their opponents.”

Between now and the start of the Transat Jacques Vabre from Le Havre on 5th November, StMichel-Virbac, SMA, Initiatives Cœur and Des Voiles et Vous! will attend one final course in Port-la-Forêt, during the week of the 16th October. These three busy days of sailing around the Glénan Islands will offer them a final rehearsal before the big event.