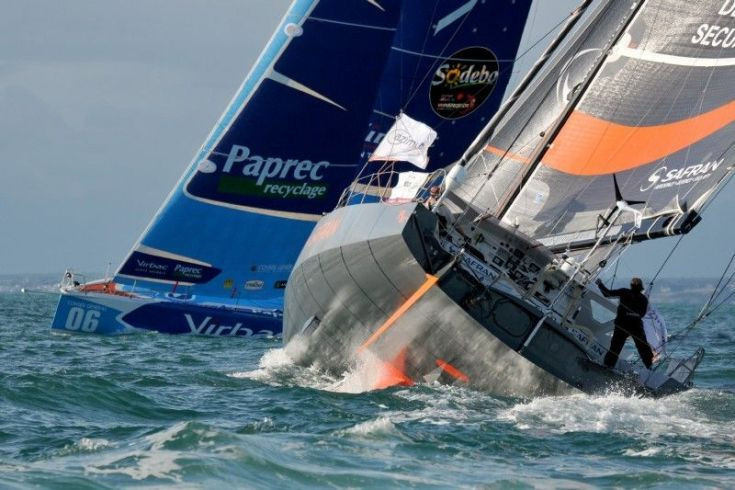 The Vendée Globe press conference on 26 September, in the Salle de la Mutualité in Paris, confirmed the media’s infatuation for this reference single-handed round the world race. The room was full to bursting to listen to the final arrangements and attend the definitive presentation of the candidates who will be at the start.
Ultimately there were nineteen of the twenty of the round the world candidates present at the Vendée Globe press conference. Zbigniew Gutkowski, nicknamed Gutek in the sailing world, the first Polish sailor to sign up for the race, was in the process of completing his qualifier, which will enable him to take the start. Second in the Velux Five Oceans aboard Alain Gautier’s former boat, this time Gutek has opted to set sail aboard Alex Thomson’s Finot-Conq design from the previous Vendée Globe. However, in order to achieve this, he had to complete an Atlantic qualifier with several set passage marks along the northern and southern latitudes as well as the western longitude.

The Azimut Trophy, final confrontation
With a little over forty days to the start and prior to 19 October, the deadline for the boats to be in Les Sables d’Olonne, nine of the Vendée Globe candidates made for Lorient, Brittany, over the weekend of 28 to 30 September. Their mission was the Azimut Trophy and the final solo test before the start of their circumnavigation of the globe. This trophy event spanned around 120 miles, including an entire night at sea so as to have one last check that everything was as it should be aboard. It was Jean-Pierre Dick whose performance stood out aboard Virbac-Paprec 3 ahead of Vincent Riou (PRB) and Armel Le Cléac’h (Banque Populaire). Contested within the context of the Atlantique Télégramme, a race which gathers together over 150 crews in the rocky shallows between the island of Groix and Lorient’s harbour, the Azimut Trophy also proved to be an excellent opportunity for the Vendée Globe’s solo sailors to show off their navigational prowess. Everyone enjoyed some very friendly exchanges with their fellow sailors and the festive atmosphere rounded off with a grand general prize-giving for all the competitors.

With 40 days to go till the start, the whole fleet is ready to go. Everyone is now putting the finishing touches to their respective projects before they begin to envisage the delivery trip to Les Sables d’Olonne. As such the weekend of 19-20 October will mark the start of three weeks of fervour and a hectic round of public engagements before three months of solitude where the skippers will be battling with themselves and the competition. It’s going to be a sudden switch as they pass from one world to the other.