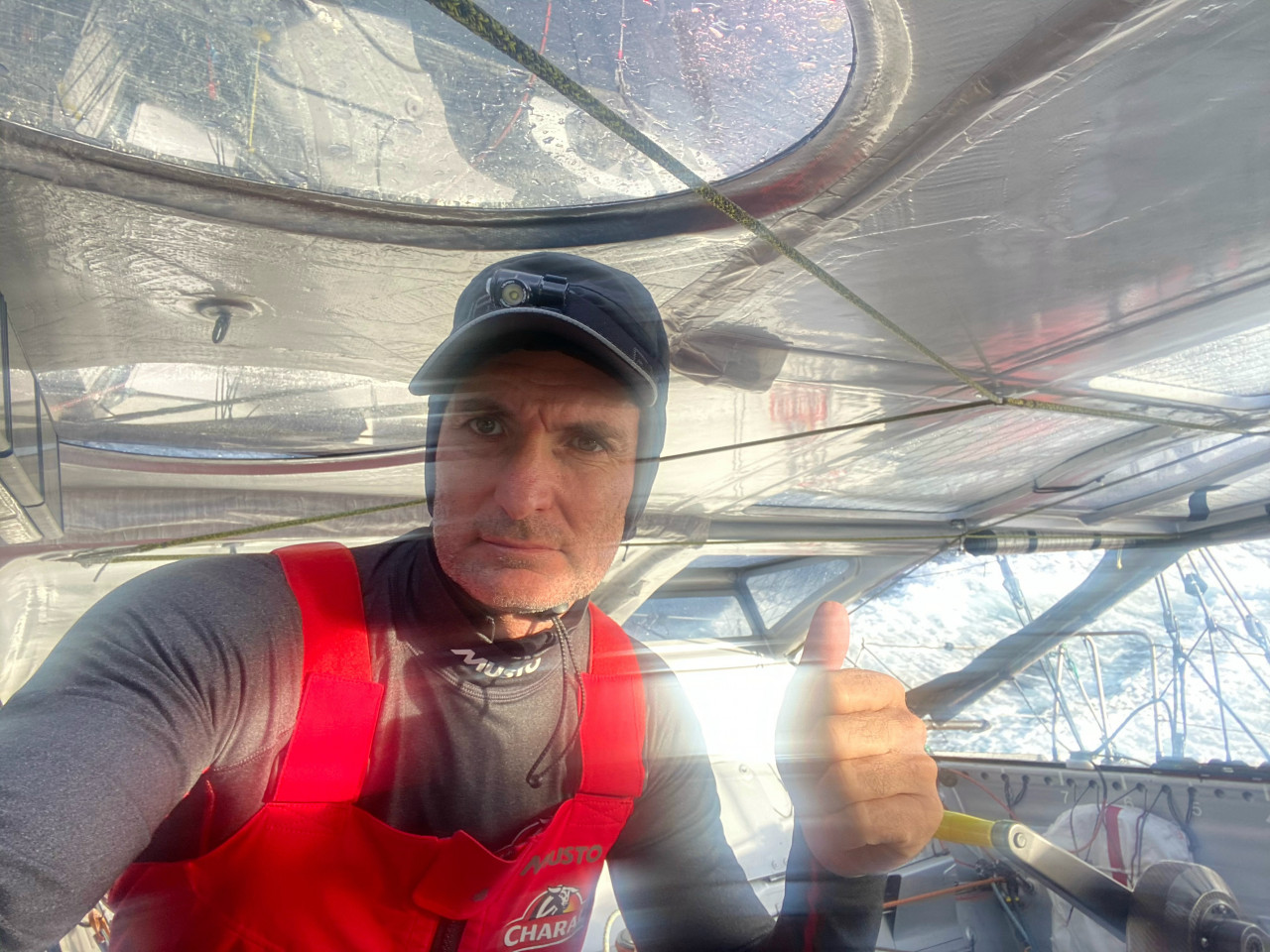 Heading west this afternoon and encountering building winds, skippers of the many of the faster foiling IMOCAs are preparing themselves for an overnight pounding, set to last five or six hours, when they punch through an active weather front which is forecast to bring them 40 knot gusts and big seas.

The reward for looking after their boats and themselves as best they can tonight will be some faster, albeit bumpy miles in a more direct, southerly direction.

While 30 year old Les Sables d’Olonne hometown favourite Benjamin Dutreux tops the afternoon classifications due to his more southerly position, some 50 miles north west of the Ria de Vigo on the Galician coast, so also Nico Troussel  on the new Juan K IMOCA Corum L’Épargne has broken from the other foiler and taken this southerly option which is considered to be safer.

Dutreux on OMIA-Water Family (which was built in Cowes as BT), Troussel, Maxime Sorel (V and B – Mayenne) and Jean Le Cam have led a southerly pack inside the Cape Finisterre TSS (Traffic Separation Scheme no go area).

Troussel’s option may be related to taking a more conservative safe option, sailing more miles but with the benefit of less severe winds, to safeguard his boat which is in its first race. But the 46-year old double La Solitaire du Figaro champion was renowned in the world of the Figaro for taking flyers away from the fleet and often coming out smelling of roses. Such gambles and big gains gave rise to rise to the expression ‘doing a Troussel’.

Troussel was lying fourth on the afternoon standings, almost 100 miles south east of rivals Jérémie Beyou (Charal), Charlie Dalin (Apivia) and the hard driving Kevin Escoffier on the older PRB who is just seven and  a half miles off Beyou’s leeward quarter.

The worst of the conditions will be tonight between 0200hrs and 0300hrs for this foiling peloton with average windspeeds above 30kts and gusts over 40, but by the morning they should be able to tack into the NW’ly wind and make faster miles down the track, albeit still in bumpy seas.

Nothing comes easily on the Vendée Globe and after breaking across a ridge of high pressure the next big question for this group especially will be dealing with Theta, a tropical storm which crosses their path between Thursday and Friday (13th!). Routings today show a possible timing which would allow these quickest boats to pass the west side of it in the NW’ly wind, but this system is evolving rapidly and being caught in its path is worth avoiding.

After that the tradewinds are still not established and current timings to the equator are some three days behind the record of 9 days 7 hours set by Alex Thomson who led the 2016 race across into the south Atlantic.

“You have to be wise. This is not where the Vendée Globe is won, but this is where it can get lost,” says Damien Seguin on the Vendée Live program this midday. The Paralympic champion was speaking after diving to free a fishing net which was caught on the keel of his boat. Meantime Arnaud Boissières successfully scaled the mast of his La Mie Caline to free his halyard hook and release his trapped gennaker, a welcome relief for the Les Sables d’Olonne skipper on his fourth successive Vendée Globe.

Having had a composite expert add an additional pad and repair the hairline crack at the top of his mast Fabrice Amedeo is expected to head back out to restart at the Nouch buoy this evening.

Fabrice Amedeo(Newrest-Art & Fenêtres) “The the plan is to leave this evening around 22:15 to rejoin the race, well to start really as we never really got going before!”

Alan Roura (La Fabrique)"It looks like being pretty nasty out here this evening and there could well be some damage in the fleet… I have got everything prepared with sails ready. The deck has been cleaned up and everything inside is tidy. Aboard the boat, everything is fine. I have managed to get some sleep. I haven’t eaten much, but I have been drinking a lot and I feel better. I’ll try to send you some videos and photos between now and this evening… if I manage it.

Damien Seguin (Groupe APICIL)"I know that taking the southern option would maybe position me well for the short term and the gain is still there and it is a nice surprise to still be doing well close to the Galician coastline. Jean Le Cam and I crossed paths yesterday, and today again, it is great. We spent quite a lot of time together when preparing for the race at the boat shed and now we are here again here crossing paths. I feel fine after my dive this morning. I am dry and have had some food and a nap. Now I am going to tidy the boat a bit and then going to get another nap in to prepare for the storm tonight.  We have had an intensive start to the race with lots of manouvers and we have to take care. It is not here that you will win the race, but you can lose it."

Didac Costa (One Ocean One Planet)"Good morning, here we are on One Ocean One Planet and it is the third morning since I have left, the third day. As you can see it is calm and quiet. Yesterday was not so calm, but we made upwind headway all day to the Galician coastline, which is where we are now. I am not sure if you can see, but it is just there. Now I have to make a westerly course and take care to leave the shipping lanes on either side to keep the shipping cargo ships out of the other marine vessels in the area. For the rest of it, things are going well, the boat is doing well and I am doing some sail changes and slowly I am getting into the rhythm. We will see how things develop over the coming days because the weather is looking like it will be really complicated so we will see how it goes. I say goodbye for now and will keep in touch."