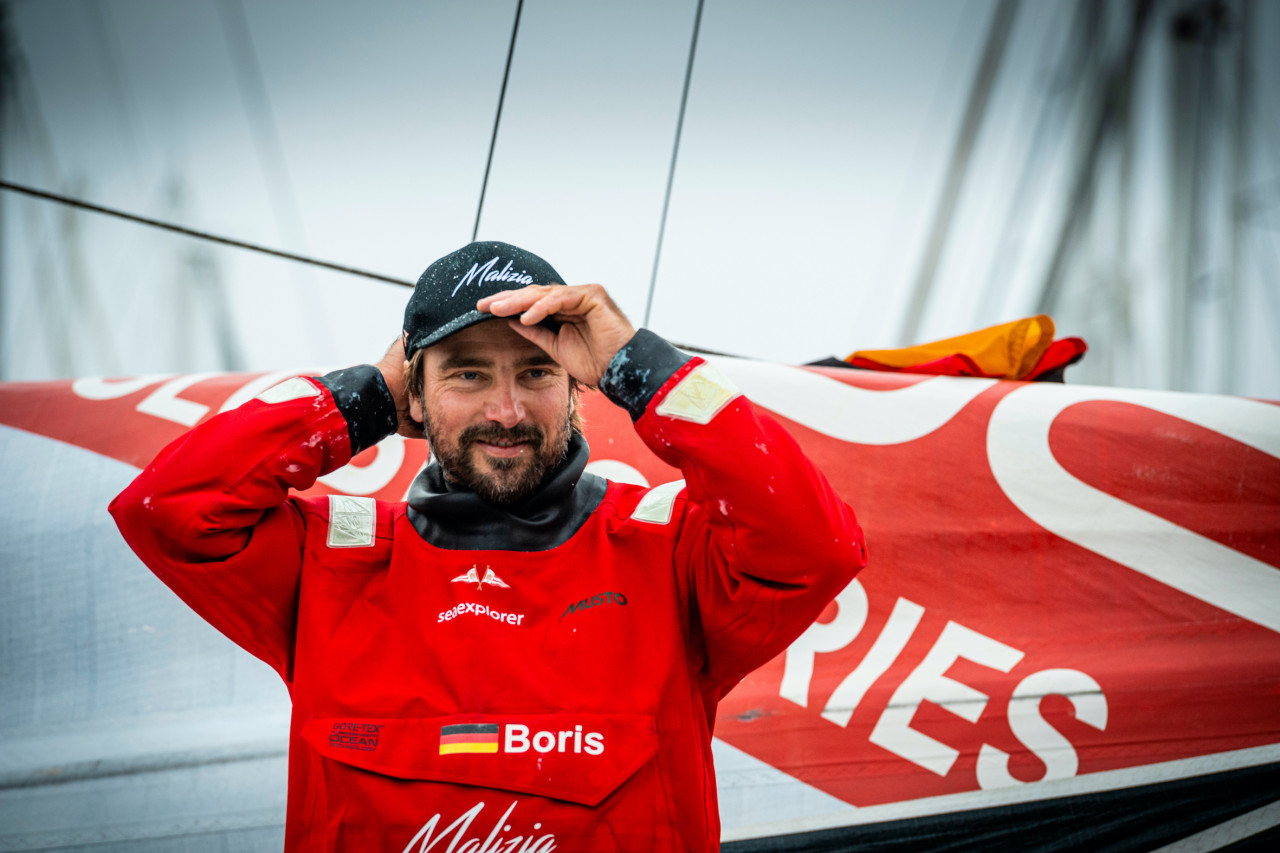 The German skipper Boris Herrmann, who finished in fifth place in the Vendée Globe on Seaexplorer-Yacht Club de Monaco, is the new IMOCA Globe Series champion, after a remarkably consistent campaign by his Team Malizia over the last three years.

The championship is calculated by accumulating the scores of skippers and their teams in the major IMOCA Class races, among them the Vendée Globe, the Route du Rhum, the Transat Jacques Vabre, the Bermudes 1000 and the Vendée Arctique.

Herrmann, aged 39 from Hamburg but now based in Lorient, entered all of those races and completed every one. He came out at the head of the championship with Vendée Globe winner Yannick Bestaven (Maitre-CoQ IV) second, and Vendée Globe runner-up and line honours winner Charlie Dalin (APIVIA) third.

The German skipper, who is among the very best ambassadors for the IMOCA Class, said the plan for his team going back to 2018 was to aim for the Vendée Globe and to try to put together a competitive entry. That meant doing all the races leading up to the round-the-world race and he said he is delighted to emerge at the end of it as the new champion.

“In order to prepare well, to be safe and to create value for our sponsors and to develop the project, we wanted to sail in all of the IMOCA programme and do as much as possible and we did,” said Herrmann.

“And we finished all the races and we never abandoned a race, which is great. There is a little bit of luck involved, of course,” added the skipper whose Vendée Globe almost came to an abrupt end just 90 miles from the finish when he hit a Spanish fishing boat. “But not abandoning is really important for me and is more important than the result in any specific race.”

The Vendée Globe apart, Herrmann’s finishes included sixth position in the Bermudes 1000, seventh place in the Rolex Fastnet Race and fifth in the Route du Rhum, all of them races in which the German skipper sailed in his characteristic conservative style, ensuring that his boat made it to the finish.

He says while he is proud of being the top skipper in the ranking, it is important to remember that many of his rivals were not able to complete the full programme as he was, because they may have been waiting for sponsors or preparing their boats. “Of course I am delighted but we have to be honest about it,”he said. “I think Yannick’s project started later than ours and not everyone has the financial means or the planning possibilities to come to all the races.”

IMOCA Class president Antoine Mermod saluted Herrmann’s achievement. “On behalf of all my colleagues at IMOCA we congratulate Boris and Team Malizia who have completed a very impressive IMOCA Globe Series,” said Mermod. “He is a modest champion, but his achievement, at the head of a very competitive ranking, underlines that Team Malizia has set a high standard when it comes to competing in the IMOCA Class and we look forward to seeing them back for the new series.”

Yannick Bestaven said the IMOCA Globe Series Championship had also helped him and his team prepare for the Vendée Globe. “This second place values and rewards the work of my team over the past four years,” he said. “I knew that the more I sailed in the Globe Series, the better equipped I would be for the round-the-world race."

“I also think it is great Boris winning,” added the Maitre-CoQ IV skipper. “He was extremely deserving on this Vendée Globe and since 2018, it’s very good for the internationalization of the class to have sailors like him involved and I hope this will continue.”The Vendée Globe winner also said he would like to see more crewed races in the IMOCA class. “I believe in the partnership with The Ocean Race,” he said, “and I hope that more foreign teams will join us in the IMOCA Class.”

Charlie Dalin, meanwhile, said third place in the Globe Series underlines how well his APIVIA campaign has gone since its launch in the summer of 2019. “The championship is spread out over time and motivates the teams to sail all the events, even the less prestigious ones,” he said. “All these events only help to develop better performance.”

Herrmann is already planning to acquire or build a new boat for the next Vendée Globe and is looking forward to another full programme of IMOCA racing in the next few years. “Certainly we stay in the IMOCA Class, for sure,” he said. “We will try to get the best boat we can get our hands on or build and, hopefully, we can race this year with the new owner of our current boat.”

And he revealed that he has had a phone conversation with the captain of the Spanish fishing trawler that he collided with in the darkness in the closing stages of his Vendée Globe.

Herrmann is the top-ranked non-French skipper in the IMOCA standings and in the Vendée Globe finishing positions. He says he wants to improve on fifth position in the round-the-world race and says the IMOCA Class has welcomed him with open arms.

“The French welcome us – we use the same infrastructure in Lorient as they do, and train with them at the Pôle Finistère Course au Large, so it’s great sportsmanship by everyone,”he said.

“We speak to everyone and chat on the dock – it’s such good camaraderie and we are colleagues within the class. I feel that part of my soul is almost French. I speak French, I live there and really enjoy being there too,” he added.

See the rest of the rankings here

*Reminder of the official events

Each skipper scores a certain number of points according to his ranking and the number of participants and a coefficient specific to each event. Example: if 10 boats take the start of a race with a coefficient 4, the first boat scores 10 x 4 = 40 points, the second boat scores 9 x 4 = 36 points, etc.