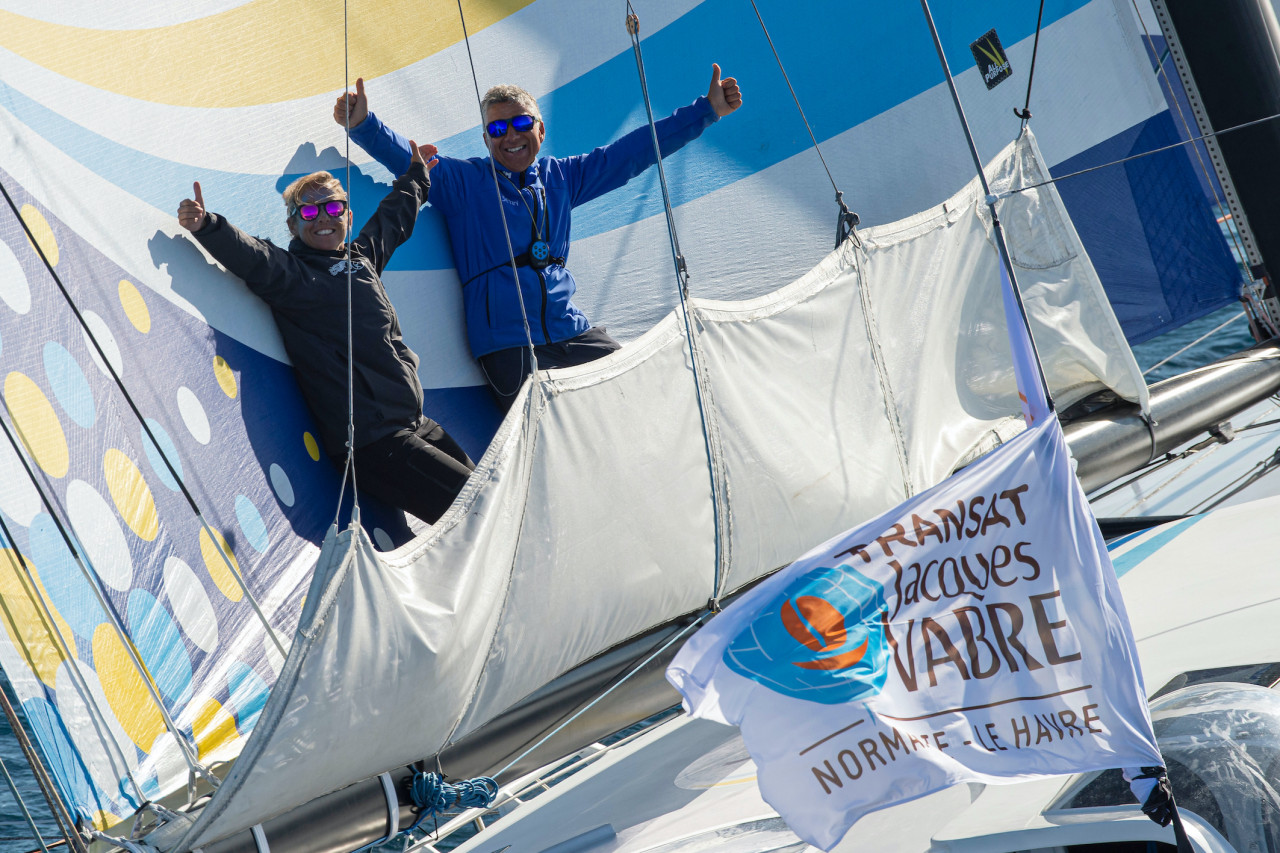 Last year’s Vendée Globe saw a record six female skippers on the start line and this Transat Jacques Vabre also features a strong contingent of top class female sailors. They are part of a record number of mixed male and female crews in the race, with no less than five of these pairings in the IMOCA division.

The tradition of mixed crews in the Transat Jacques Vabre goes all the way back to 1999 when Catherine Chabaud and Luc Bartissol took part, alongside Ellen MacArthur and Yves Parlier. In the years since, IMOCA has consistently demonstrated that men and women can compete at the very top in short-handed offshore racing on an equal footing.

In this race the mixed crews are led by podium contenders Simon Fisher and Justine Mettraux on 11th Hour Racing Alaka’i. Alongside them on the start line will be Sam Davies and Nicolas Lunven on Initiatives-Coeur, Isabelle Joschke and Fabien Delahaye on MACSF, Manuel Cousin and Alexia Barrier on Groupe SÉTIN-4myplanet and Louis Duc and Marie Tabarly on Kostum-Lantana Paysage.

The Class caught up with 41-year-old French sailor Barrier who is a fervent advocate of mixed crews at this level. The Vendée Globe veteran from Antibes, who is often to be seen on the dockside with her trusty labrador Nikka by her side (the dog has stayed in Antibes this time), says mixed crews are a “cool” option in ocean racing.

“That’s one reason why I like offshore racing because when you are a woman, you can compete with men and you can be equal with the men,” she said. “For me, it’s just normal to be around men in a racing environment and playing the same game as them and having the same chance to win.”

Barrier, who is hunting for a title sponsor to help her take part in the Vendée Globe in a foiling IMOCA in 2024, believes the Class is sending a powerful message. “I think it is normal to race together and it should be like that everywhere,” she explained. “In society today we have many challenges for women and I think this is a good example not only for sport and sailing, but for society globally as a way of promoting equality between the genders."

“So I am really proud to be maybe an example for some young girls or women who would like to achieve something,”she continued, “and maybe they think it is only for men, but when they see us – or sailors like Sam (Davies), Isa (Joschke) or Miranda (Merron) – they can see that it’s possible.”

Justine Mettraux is another skipper whose career has demonstrated the unique opportunities that sailing offers in the way that it is able to combine the skills of male and female athletes at elite level. Having been brought up racing on Lake Léman at the Racing Training Centre in Geneva, Mettraux has been used to sailing in mixed crews all her life.

“In my career I have sailed more in a mixed configuration than with women only because that is how we learned at the training centre in Geneva,” she said. “We always had mixed teams there and it is an organisation that has existed for 40 years and they always have females on board. So I come from this background.”

A member of the Ocean Race-winning Dongfeng Race Team, Mettraux believes the gender of sailors is not important. “To me, it is not whether you are male or female that matters, but whether you’re a good sailor or not,” she explained. “And you need the same skills to make the boat go fast and in the right direction. It’s nice to see that a mixed team can perform well and that that could happen in other sports as well – there could be more incentives to mix genders in different teams in different sports.”

On board Groupe SÉTIN-4MyPlanet, Barrier says the workload is shared equally between her and Cousin. “We both do the physical tasks,”she said. “We work together when the manoeuvres are coming and when it’s hard – we have to be together for this kind of thing because it’s like that when you are racing with two people on board – you do all the physical things together.”

Barrier added that she probably focuses more on the performance aspects of the boat, the data and speed, while Cousin takes care of any maintenance issues and technical faults that arise. “So we divide that part, but not the physical tasks,” said the Groupe SÉTIN-4MyPlanet co-skipper, who says her goal is to win the “daggerboard race” in this Transat Jacques Vabre and put some foilers behind them too.

On 11th Hour Racing Alaka’i, Mettraux reckons she sometimes does a bit more of the heavy lifting than Fisher – known to his friends as SiFi. “We try to share the effort and, in fact, I sometimes do more of the physical stuff like on the bow – but for sure we work the cockpit grinder together. Sometimes SiFi does the stacking a bit more than me but we try to divide it well because there is so much to do and it’s really physical, so we try to share the effort.”

Mettraux says she and Fisher have developed into a strong team, something that has been born out in their results, with a podium finish in both the Rolex Fastnet Race (third) and the Défi Azimut 48 Hours (second). “It’s been really nice for me, really easy,”she said. “I think we have found a way to work together and done so really quickly, so it’s been all good. SiFi is a really good sailor, a really good navigator and he’s good at pushing the boat and finding a good set-up, so it’s great to sail with him.”

The key to the success on board Alaka’i is that Fisher and Mettraux are cool customers on the same wavelength. “I think we are quite similar,” summarised Mettraux. “Quite quiet and calm people and most of the time we think the same things at the same time about what to do for the boat and so on, so it’s nice.”

It will be fascinating to see whether this pairing can continue their stellar performances from earlier this year and become only the third male-female partnership in the Transat Jacques Vabre in the IMOCA Class to finish on the podium (after Chabaud and Bartissol in 1999 and Roland Jourdain and Ellen MacArthur in 2005)…and perhaps even the first to win it.