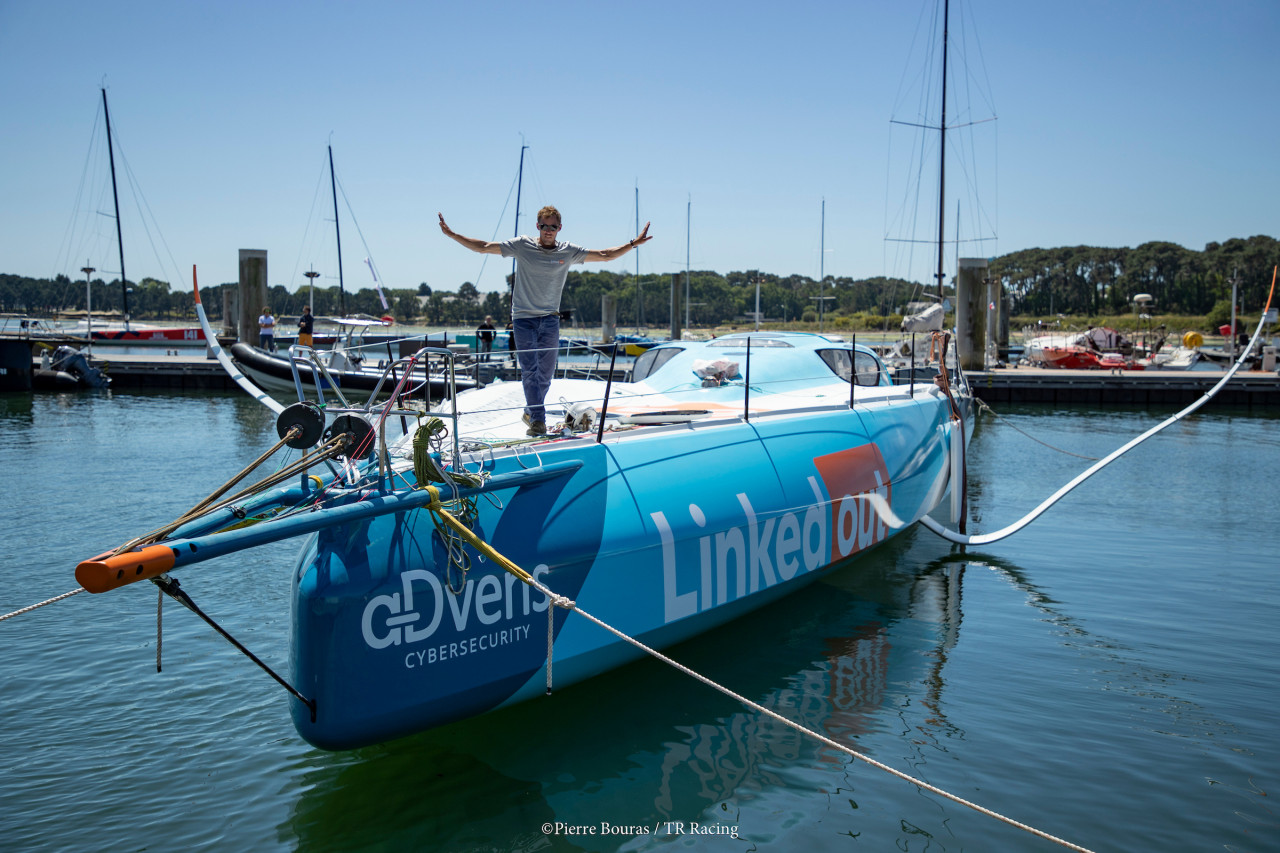 There have been more and more measurement checks and trips to check out the changes made during the winter. Other sailors have to wait a while before heading back out to sea. We look at what has been happening at the end of the refit season.

Preparation for the Vendée Globe: ease of handling and reliability are the watchwords

Work in the yards was more or less able to continue during the lockdown, but at a much slower pace than usual. As this is a round the world race year, reliability has become key. The boats were taken completely apart and the parts examined in detail and if necessary replaced. On some of the IMOCAs, reinforcements have been added to some parts of the structure. That was the case aboard Isabelle Joschke’s MACSF in particular. “These reinforcements were necessary. This boat dates back to 2007 and was not designed to be fitted with foils, which offer higher speeds, more violent shocks and heavier loads,”explained Alain Gautier, team manager for the MACSF project.

In terms of handling, lots of modifications were necessary to adapt to solo sailing. That is why inside Apivia, around the nav console and rest area, improvements have been made. Cameras have been added to help Charlie Dalin trim his sails, observe what is happening over the foredeck and get a better view of everything around the boat. The most visible work done to make the boats easier concerns some of the protective covers, which have been extended, which was the trend with the latest generation of IMOCAs, where the cockpits are very sheltered from the seas that wash over the deck. Sam Davies’s boat (Initiatives-Cœur) is one of the IMOCAs fitted with a new protective cover. “It allows me to close off the cockpit up to the mainsail traveller. Sam therefore has a watch position where she is well protected and yet close to where she carries out manoeuvres. As the boat is very fast, we have to limit our movements aboard,” explained David Sineau, team manager for Initiatives-Cœur. Alan Roura and his team also carried out a lot of work along the same lines. “In 2016, we did not really have the possibility of covering in the cockpit on Superbigou. It was really tough for me in the most southern latitudes,” remembers the skipper of La Fabrique. “As our boat has become a foiler, the speeds and humidity aboard have increased, making me more vulnerable outside. I cannot bear being soaked all the time. It is vital for me to look after my physical well-being to be in the best of shape and perform as well I can.” We can also see protective covers on the boats skippered by Fabrice Amedeo (Newrest-Art & Fenêtres), Kevin Escoffier (PRB), Arnaud Boissières (La Mie Câline-Artisans Artipôle), Stéphane Le Diraison (Time For Oceans), Boris Herrmann (Seaexplorer) and Yannick Bestaven (Maître CoQ) – among others.

All of the teams also aimed to make improvements in terms of performance. Aboard each of the IMOCAs, there have been a wealth of changes made that are too numerous to mention here.Often these modifications cannot be spotted unless you are an expert, but they are nevertheless important. The teams aiming to be up there at the front are the ones that have tended to make the most spectacular changes. We can see that with the example of Jérémie Beyou, skipper of Charal: “We modified the overall balance aboard the boat, the bow, the volume of the ballast tanks, how weight is distributed, the weight of the bulb; We have closed the cockpit off a bit more, looked at everything to do with energy and electronics, built new foils and the housing that goes with them, built a new mast and got new sails. So, in every area, we have pushed things all the way to make gains in performance, without ever sacrificing reliability.”

The boats skippered by Thomas Ruyant (Linkedout) and Sébastien Simon (Arkea-Paprec) will shortly be fitted with new foils. That has already happened aboard Boris Herrmann’s IMOCA, Malizia II, now renamed Seaxplorer-Yacht Club de Monaco (Boris has also recently obtained the support of the logistics multinational, Kuehne + Nagel, of which Seaexplorer is one of the entities). With these more powerful appendages and with a new bow profile, the German skipper hopes to gain up to two extra knots of speed in some conditions. The big teams have been able to change the shape of their foils based around the type of race. The Transat Jacques Vabre (2019) was a race with potentially a lot of reaching, whereas the Vendée Globe is a race where there is in general 80 % of downwind sailing. The V2 foils have in particular been designed based on that element. In general, the second versions of the foils were designed after getting feedback from what they experienced last year. In addition to that, the teams believe it is necessary to have a spare set of foils in case they suffer damage before the Vendée Globe.

In all of the teams, a lot of thought has gone into the design of the sails (limited to eight for the Vendée Globe) and on the question of energy aboard the boats. Some skippers have also worked hard on optimising their autopilots and that was the case for Yannick Bestaven.

One of the consequences of these long refits, is that the measurers have been kept busy, in particular carrying out the famous, spectacular 90° test, as René Boulaire, the chief measurer explains: “Thanks to talks we continued to have with the teams during the lockdown, we were able to get the test going quickly. We put in place a protocol to carry out the checks in order to respect public health rules and distancing. All of the teams have done what was required. IMOCAs are being relaunched practically every day at the moment. These are complicated boatswhich are regularly being changed, so we are being kept very busy during this period.”

Relief and excitement of the first trips

The lockdown period was very frustrating for the IMOCA skippers, who are fans of speed and open space. It was also potentially worrying, as the calendar for 2020 was very demanding. But since the lockdown ended, sailors have been spoilt by the weather. Those who have been lucky enough to get out there sailing again are fully enjoying this new freedom, while respecting all of the necessary health regulations. Armel Tripon was able to enjoy sailing in 18 - 25 knots of wind on Monday 25th May for one of his first trips since the second foil was fitted to L’Occitane en Provence. Clearly, Armel was enthusiastic: “At the helm she is very stable, even in strong winds and you can steer her with just one hand. She responds gently and precisely. I think that is fairly exceptional on this type of boat. The foils are also very stable and the boat takes off with very little wind and can be easily kept under control. When you are outside, it feels like sailing a multihull, particularly as with the foils which stretch right out, the boat does not heel over very much. She seems light and flies through the air. When you are inside, the noises amplified by the stiffness of the carbon remind us of the forces and strains.”

We have seen some fantastic pictures of the latest IMOCA (launched on 5th May), CORUM L’Epargne, skippered by Nicolas Troussel, who went sailing for the first time with foils en days or so ago. “The boat has become a real foiler and we are now getting used to her,” explained the skipper. Among the sailors already back at sea, we can mention Charlie Dalin (Apivia), Jérémie Beyou (Charal), Kevin Escoffier (PRB), Kojiro Shiraishi (DMG Mori), Clarisse Crémer (Banque Populaire X), Manuel Cousin (Groupe Sétin), Arnaud Boissières (La Mie Câline-Artisans Artipôle), Sam Davies (Initiatives-cœur), Yannick Bestaven (Maître CoQ), Isabelle Joschke (MACSF), Thomas Ruyant (LinkedOut) and Maxime Sorel (V and B-Mayenne),

with the latter pleased to be back out there sailing: “I am over the moon to be back with my boat. The goal is to get things moving again in May in order to check out the modifications that were carried out during the winter. In June, we will test our new sails and I’ll be able to train during some long trips. Then, I hope to get back racing solo on 4th July with the Vendée-Arctic-Les Sables d'Olonne.” We should add that Alex Thomson’s IMOCA (Hugo Boss) is also out on the water in Britain.

Some are having to wait a while

For Miranda Merron, one of the six women registered for the Vendée Globe, the wait came to an end yesterday, Tuesday 26th May, when her IMOCA, Campagne de France was relaunched. She is expceted to start sailing again soon. Some boats are due to be relaunched shortly, such as Newrest-Art & Fenêtres (Fabrice Amedeo), Prysmian Group (Giancarlo Pedote), Pure-Best Western (Romain Attanasio), Water Family-Oceania Hotels (Benjamin Dutreux), Bureau Vallée (Louis Burton) and Groupe Apicil (Damien Seguin). Arkea-Paprec (Sébastien Simon) and La Fabrique (Alan Roura) will be put back into the water later today (Thursday). For the other sailors, the wait continues

Jean Le Cam (Yes We Cam) knows his IMOCA really well already and does not want to rush things, so is taking his time to prepare his boat, which is due to be relaunched in late June-early July. Stéphane Le Diraison is carrying out a major refit on his Time For Oceans (fitting foils, a new coach roof, and modifying how the ballast tanks are laid out), and plans to come out of the yard in mid-June. As for Alexia Barrier (4myplanet), she still needs to find the funding to change the keel on her boat, the oldest in the IMOCA fleet.

Finally, we are pleased for two sailors who have recently found partners, in spite of the tricky economic context. Ari Huusela now has the backing of Stark, Finland’s leading building materials firm. Romain Attanasio has managed to obtain funding from Best Western® Hotels & Resorts France. “The exceptional circumstances caused by the spread of Covid 19 meant this has been a particularly stressful time for my team and me. Getting ready for an adventure that is as difficult as the Vendée Globe is never easy and even harder when dealing with these circumstances. That is why I am particularly pleased to welcome Best Western® Hotels & Resorts to this adventure,” said a delighted Romain.